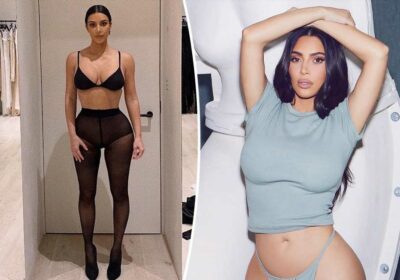 The reality star has long told stories of wearing multiple pairs of shapewear and layering up on boob tape, but apparently she’s been going commando underneath it all.

In a video posted on Skims’ Instagram Stories Monday, the 41-year-old star of Hulu’s “The Kardashians” showed off her brand’s Dipped Front Thong ($18) and declared, “I never wore underwear until we invented this style.”

She also confirmed her undying love for Skims’ dipped thong during her recent interview on the “Not Skinny But Not Fat” podcast.

And she shared a similar sentiment while giving followers a tour of her underwear closet last month, saying, “I was a non-underwear kind of girl for a long time, just because they bothered me.”

Continued Kardashian in the clip, “For a good last few years I just wouldn’t wear underwear, and now I do and I’m obsessed.”

She may have been exaggerating, however — because during a 2015 interview with Cara Delevingne for the Evening Standard, the star pledged allegiance to a different brand of panties.

“I only just started wearing underwear a month ago, and I never wore underwear until then. I like Hanky Panky underwear,” Kardashian told the model at the time.

When Delevingne made a comment about crotchless shapewear, Kardashian replied, “Oh, the ones where you can pee? But I always pee all over my Spanx, it’s a disaster. They aren’t crotchless enough!”

Seems Kardashian’s been plotting her empire for longer than fans were aware.