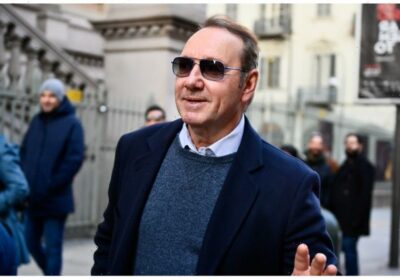 Kevin Spacey took the opportunity to praise his manager Evan Lowenstein in a passionate speech Monday, receiving a lifetime achievement award prize prior to holding a master class at Italy’s National Museum of Cinema in Turin.

The occasion was Spacey’s first speaking engagement in more than five years, during which the Oscar-winning actor has been fighting sexual misconduct allegations.

“Good evening. The first performance that I ever gave was in my junior high school drama class. It was a little five-minute scene that we had to create, with no words,” Spacey started out. “But we could have music. I was 11 years old. And I decided to do a Western scene, so that I could play a cowboy. Well, a bank robber. The bad guy, naturally.”

Spacey then went on: “I have been so honored to have been part of the creative process with so many remarkable people. Filmmakers, artists and technicians I have had the chance to work with. Who would not consider tonight the perfect opportunity to say, ‘Thank you!’ You are not just honoring me. You are honoring all of them.”

The actor pointed out his gratitude towards the museum “for having had ‘Le Palle’ – [Italian for balls] to invite me tonight.” He expressed gratitude to friends and colleagues.

“But there is one person that I must point out tonight. Because when you have a best friend like I do in Evan Lowenstein, who is here tonight, then life can be pretty special. And working through any challenge is worth the effort. Evan has given me so much advice, counsel, perspective – professionally, yes. But more importantly, because of our friendship.”

“It’s almost impossible to tell you all what he has done. The degree of guidance and wisdom that he has brought to my life. He is unlike anyone,” Spacey said. “Evan has not only stood beside me. He has stood in front of me when I needed to be led and stood behind me when I needed to be shoved… He is a remarkable man and it has been his ability to take whatever setbacks we’ve faced and somehow get up and keep moving forward. And that has given me the strength to somehow stand up and follow him. I am truly blessed to have you as my brother. The brother I never had, so thank you.”

He ended the speech thanking the museum “for giving me a night I will never forget.”

Spacey first visited the museum last year when he made his return to acting, starring as a police detective in the Franco Nero-directed low budget indie drama “L’uomo Che Disegnò Dio” (“The Man Who Drew God”).

During the one-hour sold out masterclass, Spacey spoke with the museum’s director Domenico De Gaetano about milestones of his career on screen and stage, film-making and storytelling, his best-known performances and characters, and the making of famous scenes in films including “The Usual Suspects,” “L.A. Confidential,” “Seven,” and the Netflix TV series “House of Cards.”

Earlier in the day Spacey met with Italian journalists but declined to speak with international press.

Spacey is scheduled to go on trial in London in June on a dozen sex offence charges spanning a period between 2001 and 2013, including when he served as artistic director at the city’s Old Vic theater. He has pleaded not guilty.

In October a New York jury sided Spacey in a $40 million civil lawsuit, finding that the actor did not molest actor Anthony Rapp when he was a teenager and is not liable for battery.