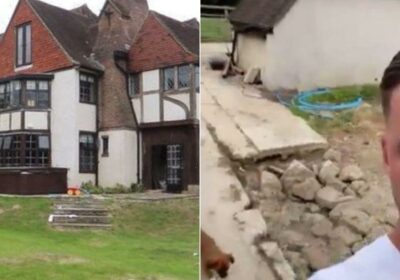 Katie Price's home appears to look like a derelict building site in a new video shared by fiance Carl Woods.

The TV personality, 42, moved back into her 'mucky mansion' earlier this year, promising to restore the once-stunning countryside property.

Having rented another huge home for her family over the past few years, Katie is determined to turn the run-down plot into a fully functioning family home once again.

The former glamour model, who rose to mainstream fame on I'm A Celebrity… Get Me Out Of Here! in 2004, is a mother of five, sharing 19-year-old Harvey Price with estranged ex Dwight York, Junior Andre, 16 and Princess Andre, 14, with ex-husband Peter Andre.

Ex-partner Kieran Hayler is the father of Katie's youngest two kids, Jett, eight, and Bunny, seven, though the star hopes to have more with current fiance Carl, 32.

And it looks like the busy mum is putting in the work in order to turn her rickety home into one fit for a new arrival.

The mucky mansion has fallen into disrepair over the years and recently suffered a collapsed ceiling and flooded kitchen, and was turned upside-down by intruders who completely flooded the upstairs by leaving the taps running.

Only last year, firefighters were called to the mansion to tackle a huge fire, as neighbours feared it was burning down.

A new video shared by Carl has revealed the garden is still in a huge state, with mounds of dirt and rubble all over its grounds.

There's a long way to go until the property is back to its former state, but Katie and Carl will be sharing the whole journey with their fans.

Channel 4 have signed a deal with the celeb couple and will spend four months documenting the mucky mansion makeover in a 'Changing Rooms' style television show.

Filming has started today, with the multi-million pound renovation and all of its ups and down being captured on camera.

A source revealed to The Sun: "Filming started today – it's going to be a huge transformation with millions of pounds poured into it.

"Everyone hopes the house will be restored to its former glory, but it's a huge job, it's completely uninhabitable at the moment."

They continued: “Cameras and production crew arrived on the grounds today and Katie's thrown herself into mucking in."

Katie's representative also told the publication: "Yes, I can confirm filming has commenced with Channel 4."