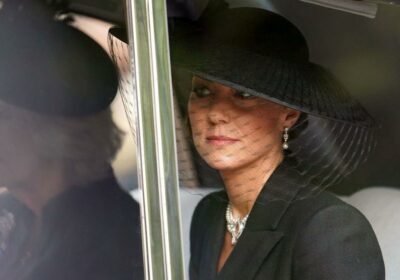 Kate Middleton, the Princess of Wales paid a poignant tribute to The Queen on Monday as she attended her state funeral while wearing one of the late monarch’s own necklaces.

Dressed all in black, the Duchess of Cambridge and Cornwall, added a sweet but solemn nod to her majesty, by wearing her Japanese pearl choker necklace – the very same necklace she had worn to Prince Philip’s funeral last year.

The necklace, which was constructed by Garrard, is believed to have been created from a collection of pearls that were gifted to the Queen by the Japanese government in the 1970s, when she made a formal state visit to the country.

According to royal jewellery expert Leslie Field, the necklace was made “from pearls in [the Queen’s] collection” and also features a clasp that is large enough to accommodate an extra strand of pearls if desired.

The multi-strand necklace has adorned several royal necks over the years, as the Queen was well known for sharing her jewellery collection with her loved ones.

In November 1982, the Queen famously loaned the choker to the late Princess Diana, who went on to wear it during a state visit from Queen Beatrix of the Netherlands.

Wearing the choker at a lavish banquet at Hampton Court Palace, Diana paired it with Queen Mary’s Lover’s Knot Tiara and the enormous sapphire brooch given to her by the Queen Mother as a wedding present.

Kate herself has worn it several times in the past, including at a party celebrating the Diamond Wedding Anniversary of the Queen and the Duke of Edinburgh in November 2017.

Alongside her necklace today, The Princess of Wales also wore a pair of Bahrain pearl drop earrings, which again, were once a prized piece of Queen Elizabeth’s own collection.

The delicate pearl earrings had been gifted to The Queen in 1947 as a wedding present when she officially tied the knot with the Duke of Edinburgh.

The earrings themselves comprise of round diamond studs, from which a series of round and baguette cut diamonds are suspended, before the Bahraini pearls are used as drops on the earrings.

The earrings were previously a prized possession of the Queen, with Princess Elizabeth (as she was known prior to taking the throne) wearing them frequently in the early years of her marriage, with the items frequently appearing in her official royal portraits.

In 1982, the Queen loaned them to the then-Princess of Wales, Diana, who wore the earrings on the very same occasion she wore Kate's Japanese pearl choker necklace.

Alongside the nod to the Queen with her jewellery choice, the use of pearls is also an acknowledgement to the longstanding tradition of Royal women to wear them while in mourning.

Since the reign of Queen Victoria, pearls have often been worn by royals when they are in mourning, with the Queen first adopting the practice after the loss of her husband Prince Albert.

So distraught was the historic Queen by the loss of her husband, that she only wore black clothing for the rest of her life alongside white pearls, as they were considered to denote purity and tears.

Queen Elizabeth II also began to wear pearls frequentlyfollowing the death of Prince Philip last year,with members of her own mourning family now continuing the same tradition in the days since her death on September 8th.