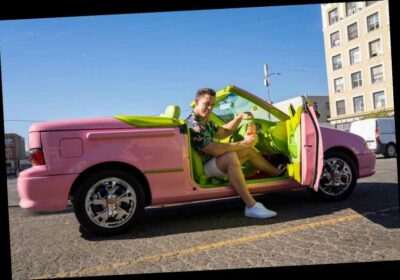 John Cena can't wait to see what happens this Super Bowl Sunday — during the game and the commercials.

"I watch sports for the story," Cena, 43, tells PEOPLE. "As a storyteller and someone who continues to tell stories through live-action and through cinema, I find the interest when there's competitive narrative."

The F9 star, who is currently shooting HBO Max's upcoming Peacemaker series, says the storyline between the legendary Tom Brady and the up-and-coming superstar Patrick Mahomes is what makes this weekend's big game (between the Tampa Bay Buccaneers and the Kansas City Chiefs) so compelling.

What's equally compelling for Cena, he says, will be who wins the $1 million during his Mountain Dew Major Melon commercial — a brightly colored, vintage-designed ad based around the Pepsi Co. company's newest flavor.

"I'm really a fan of the look of the commercial," Cena says. "It looks awesome and funky and I think people are going to be blown away with the presentation, but there's just more to it than an eye-catching, memorable ad."

Mountain Dew says it will give away the $1 million cash prize to whichever viewer can guess how many bottles are shown during the commercial, using the hashtag #MTNDEWMAJORMELON on Twitter.

"It's like a special game within the game," Cena says. "It's really groundbreaking for what you can do advertising for the Super Bowl."

As for Cena, the wrestler-turned-action star says he'll be filming Peacemaker in Canada and won't make this year's WrestleMania at Raymond James Stadium in Tampa Bay, where Sunday's Super Bowl will also take place.

Though he's taken the last year off wrestling, the WWE star still filled his calendar with plenty of other big events and filming projects.

Last October, Cena got married to his wife, Shay Shariatzadeh, in Florida. He's also set to star in the latest Fast & Furious film, F9, due out in May. Last week, h announced the upcoming release of his latest inspirational children's book, Be A Work In Progress, hitting shelves in April.

"I do like to keep busy," Cena laughs about his work schedule. "It all takes time out of the schedule, but it's all time well-spent in my opinion."

"Quarantine was interesting," Cena says. "I did the best I could to be the best I could and it was a great chance for me to reflect on like, 'Hey, someday all this is going to be over. What will you do then?' It was a year-long block of time to just exist and enjoy." Cena says he read a bit more, continued working on learning new languages, and picked up an instrument: "It's a very difficult, long road but I'm still trying to learn to play piano," he laughs.

"But also it's just been something as simple as being present, being appreciative of where you are, and being appreciative of your health," Cena says. "This is a very tough adjustment for everyone, but we can often learn a lot through the uncomfortable. And man, I've certainly learned a whole lot about myself in the last year. That's my takeaway from all this."