Joan Rivers had her penthouse ‘cleared’ of ghosts by a psychic

‘United States vs. Billie Holiday’ star Andra Day wants to do action next

Joan Rivers had an especially unique morning routine to get ready for her red carpet roasts on “Fashion Police.”

According to former co-host Margaret Cho, the late, great comedian sipped on wine instead of coffee to get her day started.

“She would take her giant Starbucks cup and then empty it, and fill it with Chardonnay. And just drink her Chardonnay out of her Starbucks cup, which I thought was genius,” Cho, 52, revealed on the “People in the ’90s” podcast this week.

She also shared that “Fashion Police” shot at “really weird” hours — and that when she showed up at 4 a.m. to film, Rivers “would already be there.”

Cho described working alongside her mentor Rivers, who died at age 81 in 2014, as some of her “favorite times.”

“She loved doing ‘Fashion Police’ and she was really excited about it,” she recalled.

Cho said she first met Rivers at an awards dinner in the ’90s, shortly after the comedian had launched a new jewelry line with QVC. When offered pieces from the collection, Cho responded that she didn’t wear jewelry — sparking a two-year period of iciness between the pair, she recalled. 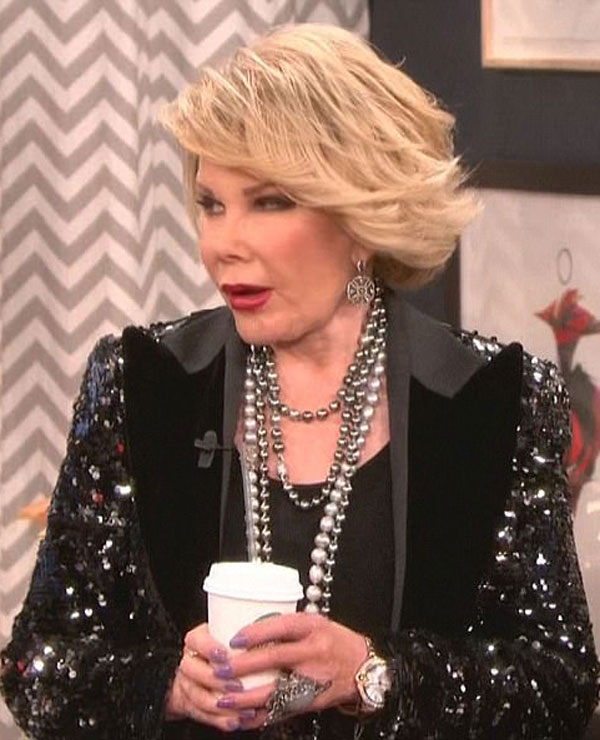 At the time, Rancic said the traditional African hairstyle made the “Euphoria” star look like she “smells like patchouli oil or weed.”

Zendaya responded to the remarks, calling them “outrageously offensive,” and the fashion critic publicly apologized.

“We had to really look at what we’re saying about the person. We changed the way that we did our reporting around fashion to having a moment where [we said], this is actually somebody’s personality that you’re judging as opposed to their outfit,” Cho said.

“It was hard to justify ‘roasting,’ but roasting you have to be a lot more thoughtful. To me, fashion is just funny and fun, but people can be very hurt by it, too.”