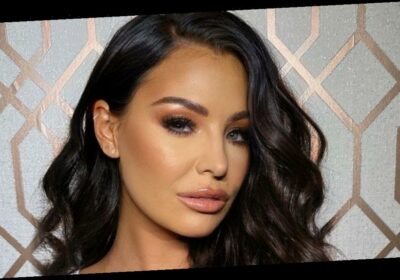 You might never have guessed that TOWIE star Jess Wright suffers from a skin condition, but she’s just opened up about her battle with psoriasis this week over on Instagram.

Showing off her bare skin on her Instagram stories, the 35 year old revealed that she is “going through phototherapy again”, after finding psoriasis patches on her face and arms.

The kind of phototherapy Jess has opted for is a treatment named PUVA, which is used to treat patients with “severe” psoriasis.

“It’s prescribed through my doctor and you can get it on the NHS or you can do it privately,” she says. “It’s like a light therapy basically and you have to go for sessions every so often.”

The star admits that her psoriasis flare-ups “gets [her] down” at times, and reveals she has a special reason to want to keep the condition under control.

“If I get married this year, I don't want to be conscious of it all the time,” she notes.

Jess announced her engagement to William Lee-Kemp in March last year, after he proposed during a romantic ski trip to the French Alps. The pair have since looked very loved-up on Instagram and we’re very excited to see Jess tie the knot soon.

Although Jess says the PUVA treatment is “working the most” in clearing up her psoriasis, the star also shared a beauty product that she’s been using to soothe her skin.

If you’re wondering what psoriasis actually is, it’s a relatively common skin condition that affects roughly 125 million people worldwide. The symptoms include patches of skin that are dry, red, rough and scaly. The condition can appear anywhere on the body but most commonly is found on the scalp, face, and on knees and elbows.

Jess might be choosing to use the Zoe Bee cream to improve her psoriasis patches as the product’s ingredients are all natural, and it’s been designed to help reduce acne and scarring as well as inflammatory skin conditions like eczema and psoriasis.

Unfortunately Jess’s favourite cream is out of stock at this moment in time, but according to the brand, it will be returning to the website very soon – so keep your eyes peeled.