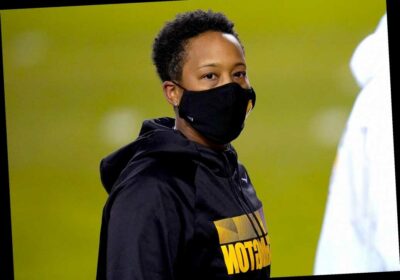 Jennifer King has made history in the NFL.

King, 36, is now the first full-time Black female assistant position coach in the NFL following her promotion to assistant running backs coach by the Washington Football Team on Tuesday. She previously served as a coaching intern for Washington, the team said in a news release.

In an interview with Good Morning America's Robin Roberts on Wednesday, King recalled the moment she learned about her promotion.

After viewing a congratulatory video from tennis legend Billie Jean King, the NFL coach shared the advice she has for others trying to overcome obstacles in life.

"I just think it's having that personal mantra of really trying to be so good that you can't be denied and just keep going," she said. "There will be hardships for you, there will be struggles and difficulties but if it's something you really want you have to find a way to get it done." King also celebrated her promotion with a heartfelt Instagram post in which she gave a "special shout-out" to her agent, Nicole Flynn.

"I wanted to take a sec thank everyone for all of the love over the past few days and want to give a special shout-out to @agentnicolelynnfor her hard work. #thankyou#youngmoneysports#washingtonfootballteam," she wrote.

The Washington Football Team, who went 7-9 in the 2020 season, announced King's new position on Tuesday.

"Coach King is well deserving of the promotion to assistant running backs coach. She came to Washington eager for the opportunity to work as a full-year coaching intern and learn from our staff," said the team's head coach Ron Rivera. "She got the chance to experience not only the in-season work that goes into being a full-time coach in this league but also the countless hours that are spent preparing in the offseason as well."

"She demonstrated all of the qualities that are needed to work full-time on my staff. She is a hard worker, a great communicator and a quality person. Coach King is always eager to learn and has shown tremendous growth since starting here last season. I know she will continue to be an asset to Coach Turner, Coach Jordan and the running back group, and she earned this opportunity with her hard work. The sky is truly the limit for her."

King had already made history when she became the first Black female coach in the league after she was hired by Washington in February of last year. She was previously the offensive assistant coach at Dartmouth and the special teams assistant for the Arizona Hotshots of the now-defunct Alliance of American Football.

King has also experienced football as a player: she was a receiver for the Carolina Phoenix of the Women's Football Alliance from 2006 to 2017.