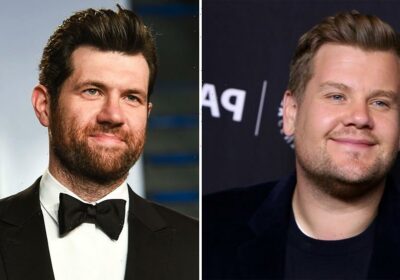 Rumors were swirling last week in Washington, D.C. that James Corden was shooting something for the White House Correspondents’ Dinner when he was spotted with camera crews at 1600 Pennsylvania Ave.

Now I can exclusively reveal that the talk show host shot a “Take a Break” segment, inspired by his “The Late Late Show” series of the same name, that will open the annual so-called “nerd prom.”

“They shot in the Briefing Room, the Oval Office and the Navy Mess,” veteran awards show producer Bob Bain, who makes his debut producing the dinner this year, tells me. “Our cold open is James Corden in front of the White House saying, ‘All you journalists out there, I know you walk through these halls every day, seeing all these people that make this place tick. Well, today, I’m going to give some of them a break.’”

Bain also tells me that a pre-taped sketch from Billy Eichner will also be shown during the dinner.

The annual Correspondents’ Dinner returns this year on Sunday, April 30, to the Washington Hilton after a bumpy few years due to Donald Trump’s refusal to attend the event, followed by cancellations due to the pandemic. President Joe Biden and first lady Jill Biden are expected to attend and sit at the dinner’s signature dais.

Bain began working on this year’s gathering about 10 weeks ago, after first meeting with the organization in 2019. “It is the nerd prom,” Bain said. “But what you’ve heard after the fact a lot of the time is, ‘This was the most boring dinner I’ve ever been to.’ We’re trying to eliminate that comment. What I have managed to do is sort of reformat the show so that it feels more like a variety presentation and moves a lot faster. Our entire show is only scheduled to go for an hour.”

Trevor Noah hosts this year’s festivities. “I call him the ‘master roaster,’” Bain says. “I think the good news is the organization is willing to make fun of itself.”

Bain insists he does not know what Noah or President Biden have planned for their remarks. Presenters include network news stars Gayle King, Yamiche Alcindor and Cecilia Vega.

The United States Marine Band returns to provide accompanying music throughout the festivities. “I have upgraded the play on music cues,” Bain said. “We’re just trying to give this a little more of a contemporary and — pardon the word, ‘hip’ — but just a hipper feel without going overboard.”

The dinner will be broadcast live on C-SPAN. However, Bain has doubled the number of cameras in the room to eight in order to capture more of the star-studded list, which reportedly includes Kim Kardashian, Pete Davidson, Drew Barrymore and Michael Keaton.

“If everything goes well and people decide that maybe this should be a network special at some point, that would be my dream come true,” Bain said.

As politicos recover from a spread of COVID cases believed to have originated at the Gridiron Dinner earlier this month, Bain is confident there won’t be a repeat at the Correspondents’ Dinner. Guests must show proof of full vaccination and a same-day negative test on Sunday. “We’re confident that this dinner is going to be as safe as it could be,” he said. “The other thing is we’ve been really closely tracking the D.C. COVID numbers. They’ve actually flattened in the last week. We’re reasonably confident that this little blip that we had a couple weeks ago is going to be exactly that.”