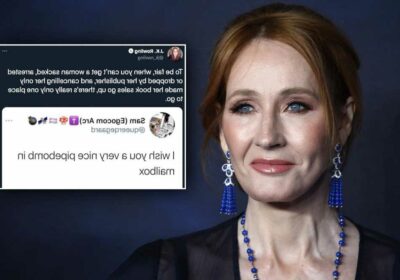 Comedy legend accused of being transphobic while defending J.K. Rowling

J.K. Rowling shot back at a Twitter user who threatened her with a “pipebomb,” noting that she has come out on top since being inducted into the cancel club.

The Harry Potter author, 55, shared a screenshot of the now-deleted tweet as evidence of the hate mail she received since expressing her controversial opinions about gender last year.

“I wish you a very nice pipebomb in mailbox,” the message from Twitter user @queerqegaard, who has since deleted their account, said.

“To be fair, when you can’t get a woman sacked, arrested or dropped by her publisher, and cancelling her only made her book sales go up, there’s really only one place to go,” Rowling tweeted in response.

Rowling, who also writes under the pseudonym Robert Galbraith, explained why she received the threatening tweet in a reply, noting it stems from comments she made last year that were deemed transphobic by critics and advocacy groups.

“Hundreds of trans activists have threatened to beat, rape, assassinate and bomb me I’ve realised that this movement poses no risk to women whatsoever,” she tweeted.

The author, who is working on her latest Cormoran Strike book series under the pen name, also expressed gratitude to fans who sent her “supportive messages” amid the latest firestorm.

“Got to get back to my chapter now, but to all the people sending me beautiful, kind, funny and supportive messages, thank you so much,” she added. “Wish I had time to answer all of you, but Strike and Robin are at a tricky stage of their investigation, so I need to drop a few clues.”

Her tweets come after her vocal opposition to transgender activism, which she has said was a way to “erode ‘woman’ as a political and biological class.”

In 2020, Rowling shared a news article that included the phrase “people who menstruate,” noting that she takes issue with the terminology. ” ‘People who menstruate.’ I’m sure there used to be a word for those people,” Rowling tweeted. “Someone help me out. Wumben? Wimpund? Woomud?”

“If sex isn’t real, the lived reality of women globally is erased,” she added.

She followed that up with a lengthy essay with her thoughts on gender, claiming that she received “heartbreaking” letters from women who underwent “irreversible” gender confirmation surgery.

Many were taken aback by her comments, some of whom dubbed them problematic and “transphobic.”

In May, a Harry Potter-themed event at a New Zealand book festival was cancelled and stars in her films —  including Daniel Radcliffe, Emma Watson, Rupert Grint and Eddie Redmayne — have since spoken out against Rowling’s commentary.

Some fans even went as far as declaring her “dead,” sending #RIPJKRowling to the top of the Twitter trending charts last September. Two big Harry Potter fan sites, Leaky Cauldron and MuggleNet, also said in a joint statement that Rowling’s personal views are at odds with the attitudes reflected in her best-selling books.

While Rowling has been largely silent since her lengthy essay, Twitter users condemned the violence spewed at the author over her opinions.

“I really, really cannot state how much I disagree with you on your opinions on this issue and how they hurt & sadden me deeply as a fan,” one user wrote. “HOWEVER, these ridiculous threats and calls for violence are disgusting. Trans activists — you don’t make yourselves look good this way!”

Others, however, said Rowling should refrain from posting “harmful rhetoric” in the first place.

Another tweeted, “Maybe, (hear me out here) if you use your massive platform to post harmful rhetoric about marginalised people, some of those people getting very upset with you and DMing you reprehensible s – – t…. isn’t actually that weird? Maybe it’s kind of expected, actually?”