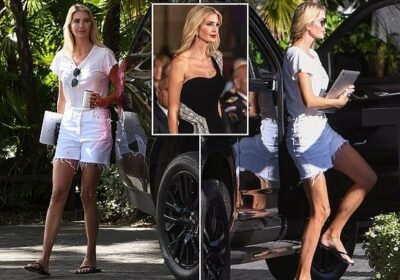 Low maintenance mom! Ivanka Trump shows off her legs in cut-off denim shorts and a T-shirt as she runs errands in Miami with a coffee in hand – after jetting to Czech Republic to receive posthumous award for mom Ivana

Ivanka Trump celebrated her 41st birthday in the Czech Republic on Saturday, having jetted into Europe to receive a posthumous award honoring her late mother Ivana – but despite her busy weekend of travel and celebration, the former First Daughter kicked off the working week nice and early on Monday when she was seen running some errands in Miami.

The 41-year-old mother-of-three put on a very casual display for her Halloween outing – taking full advantage of the warm Florida weather in a pair of white cut-off denim shorts and a simple white T-shirt, pairing her outfit with a pair of black flip flops.

She completed her look with a pair of sunglasses, which she had tucked into the neckline of her tee, and she was seen toting her Apple laptop and iPhone in one hand, while carrying an insulated coffee cup in the other as she made her way into her large black SUV outside her family’s luxury condo building.

The look was a far cry from the very glamorous ensemble Ivanka was seen sporting on Friday night, when she attended a ceremony in the Czech Republic that was held to honor her late mother Ivana’s ‘dedication to the country’.

Ivanka – who was joined at the event by her husband Jared Kushner, 41, and her older brother Don Jr – put on a dazzling display in a one-shoulder black dress that featured stunning silver beaded embellishments. Her blonde locks were styled in loose waves and she ramped up the glamour with a bold red lip color.

But by Monday morning it was back to business as usual for the former White House advisor, who was seen strolling out of luxury condo building Arte Surfside – accompanied by her doorman, who was dressed up as a sheriff in honor of Halloween.

Ivanka Trump wasted no time getting back into the swing of Miami life, having jetted back to Florida from the Czech Republic over the weekend – which also marked her 41st birthday 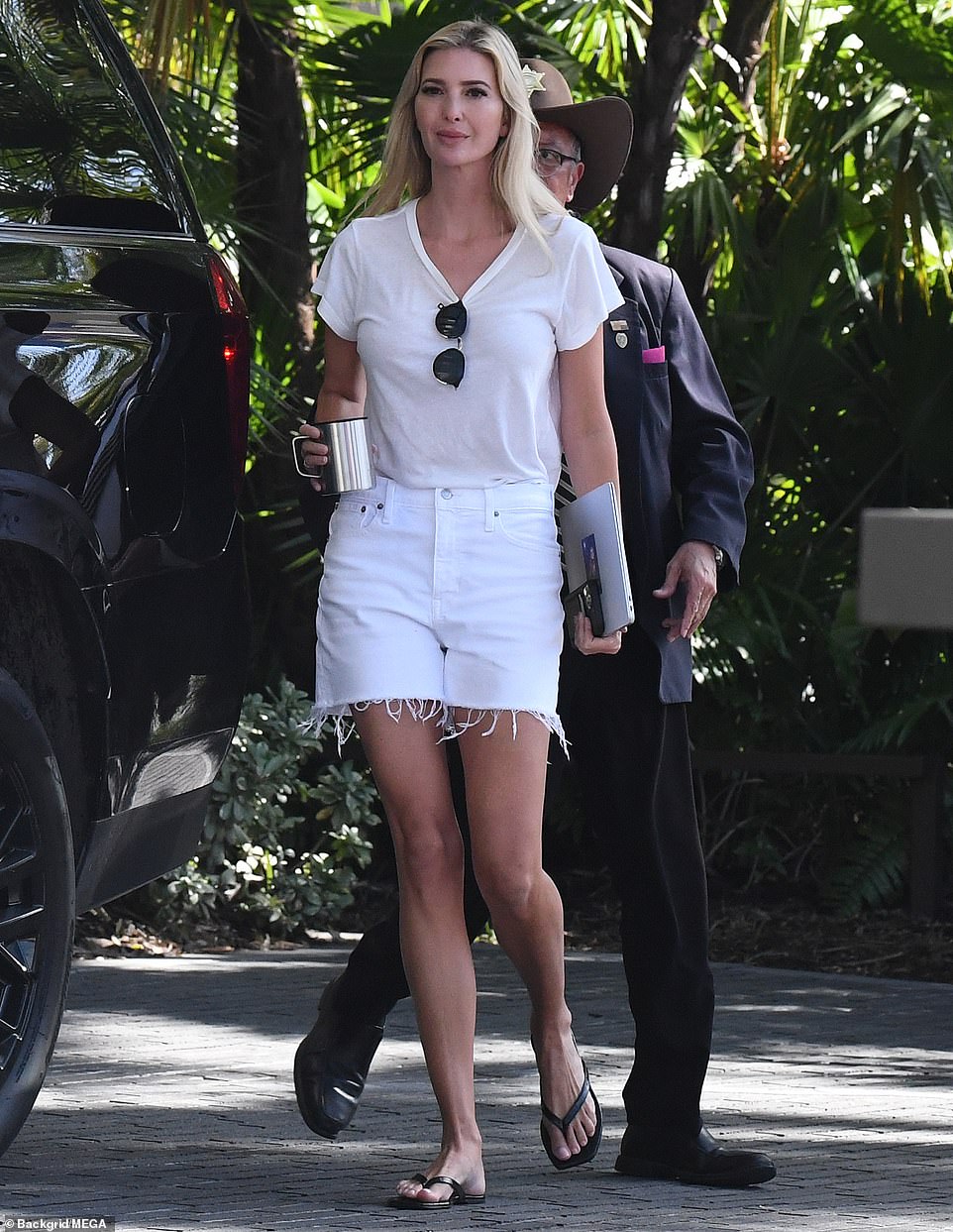 She completed her look with a pair of sunglasses, which she had tucked into the neckline of her tee, and she was seen toting her Apple laptop and iPhone in one hand, while carrying an insulated coffee cup in the other 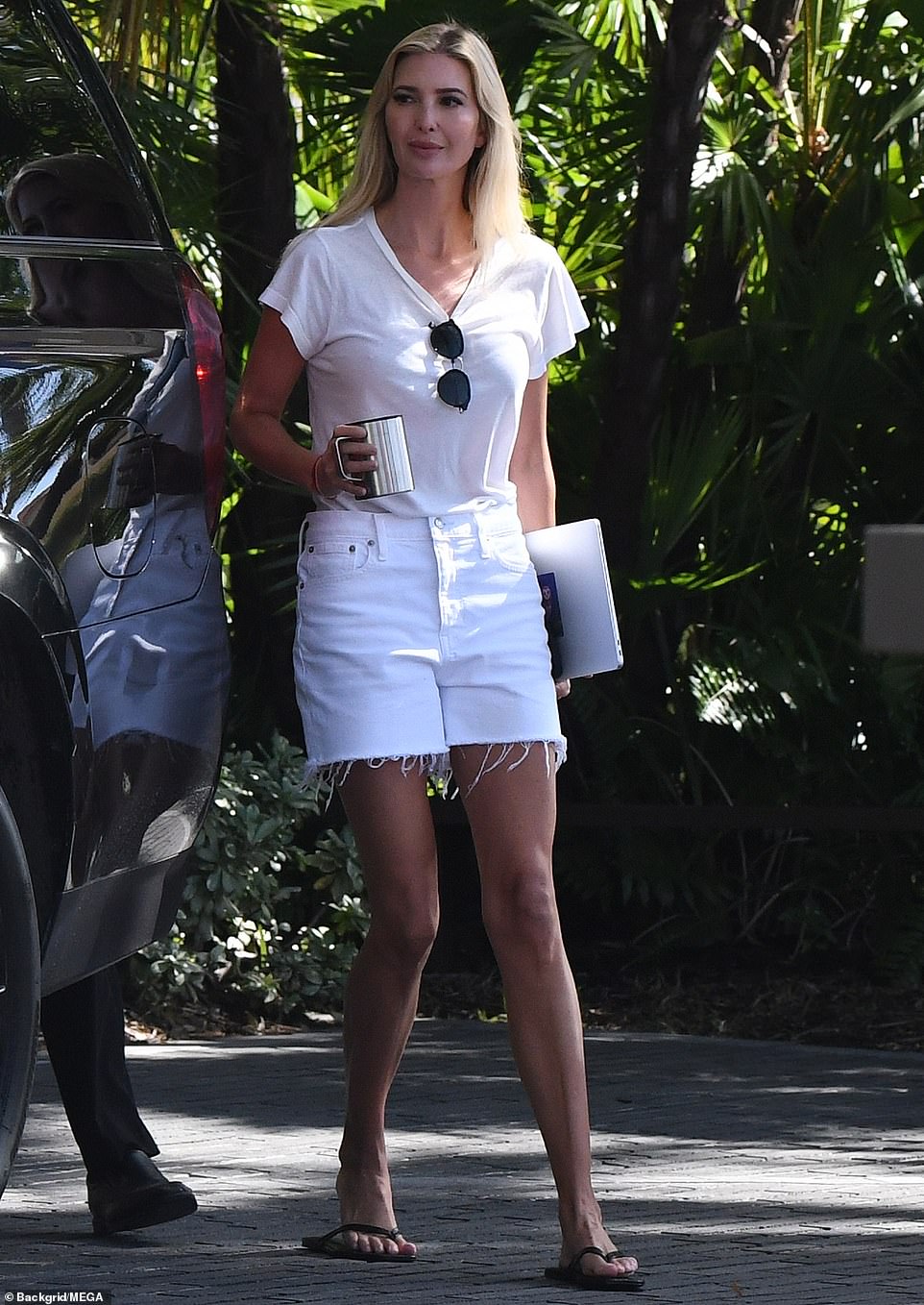 The look was a far cry from the very glamorous ensemble Ivanka was seen sporting on Friday night, when she attended a ceremony in the Czech Republic that was held to honor her late mother Ivana’s ‘dedication to the country’

Ivanka clambered into the driver’s seat of her SUV, before driving off – returning a short while later with her blonde hair pulled back in a braid and her sunglasses perched on her face.

She was seen greeting the staff at her home with a wide smile, before making her way back inside.

The mother-of-three’s outing comes just a few days after she jetting into the Czech Republic to collect an award from the country’s president on behalf of her late mother Ivana, who passed away in July at the age of 73.

Ivanka, her brother Don Jr, and her husband Jared all attended the ceremony at Prague Castle – where they were greeted by President Miloš Zeman, 78, who was seated in a wheelchair.

After Ivana’s death, Zeman told her children: ‘Your mother was not only an excellent athlete and a capable manager, but I also remember her as a kind and warm-hearted person. In addition, she remained a proud Czech who never forgot her homeland.’

As well as attending the ceremony, Ivanka found time to enjoy a bit of birthday sightseeing with her husband – sharing several images of her travels on Instagram on Sunday.

‘Thank you Prague,’ Ivanka wrote in the caption of her post – which featured a sweet image of Ivanka and Jared cuddled up next to one another while enjoying an event boat ride, as well as photos of the former First Daughter posing up in front of several landmarks while dressed casually in a black hoodie, jeans, white sneakers, and a long dark trench coat. 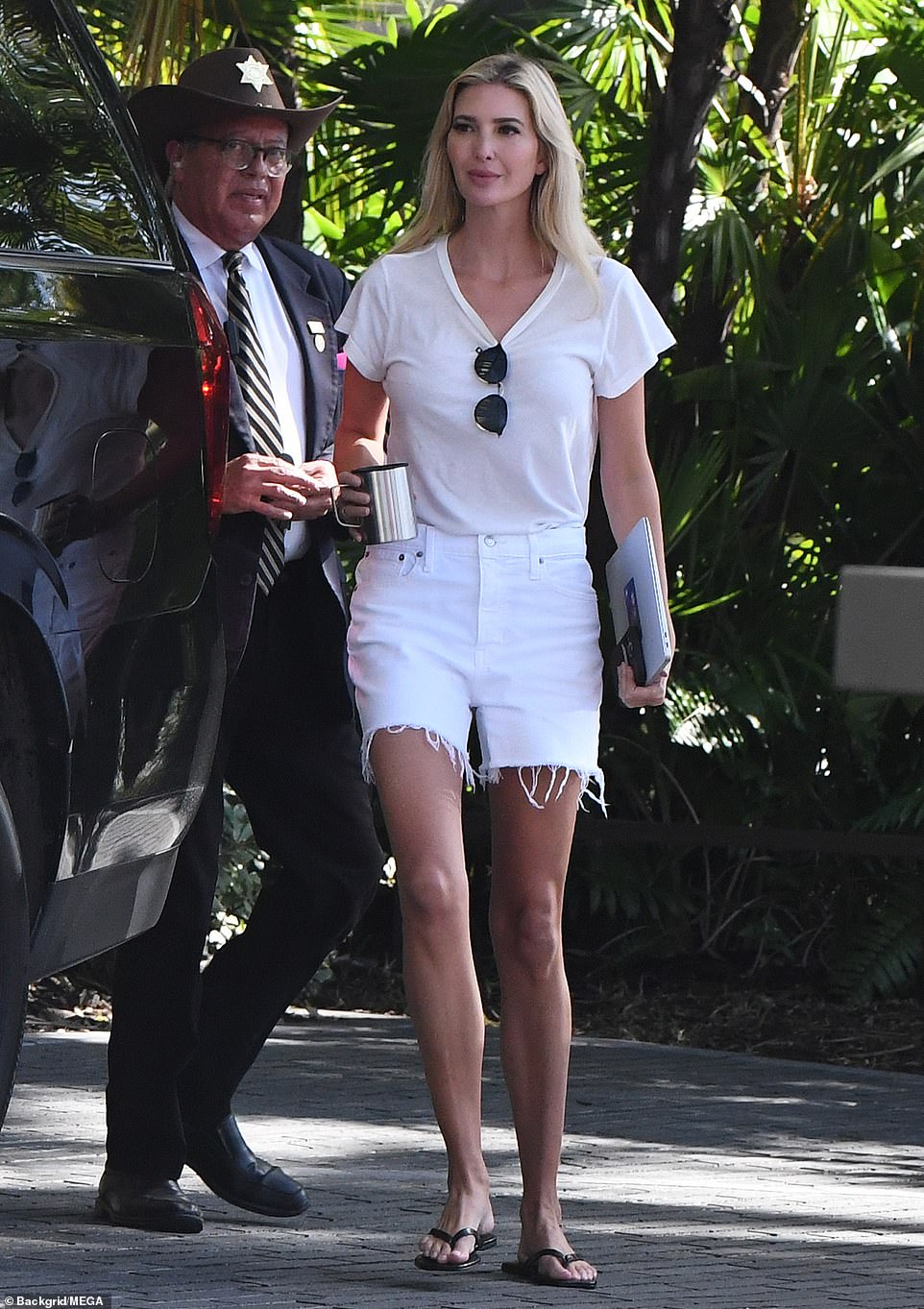 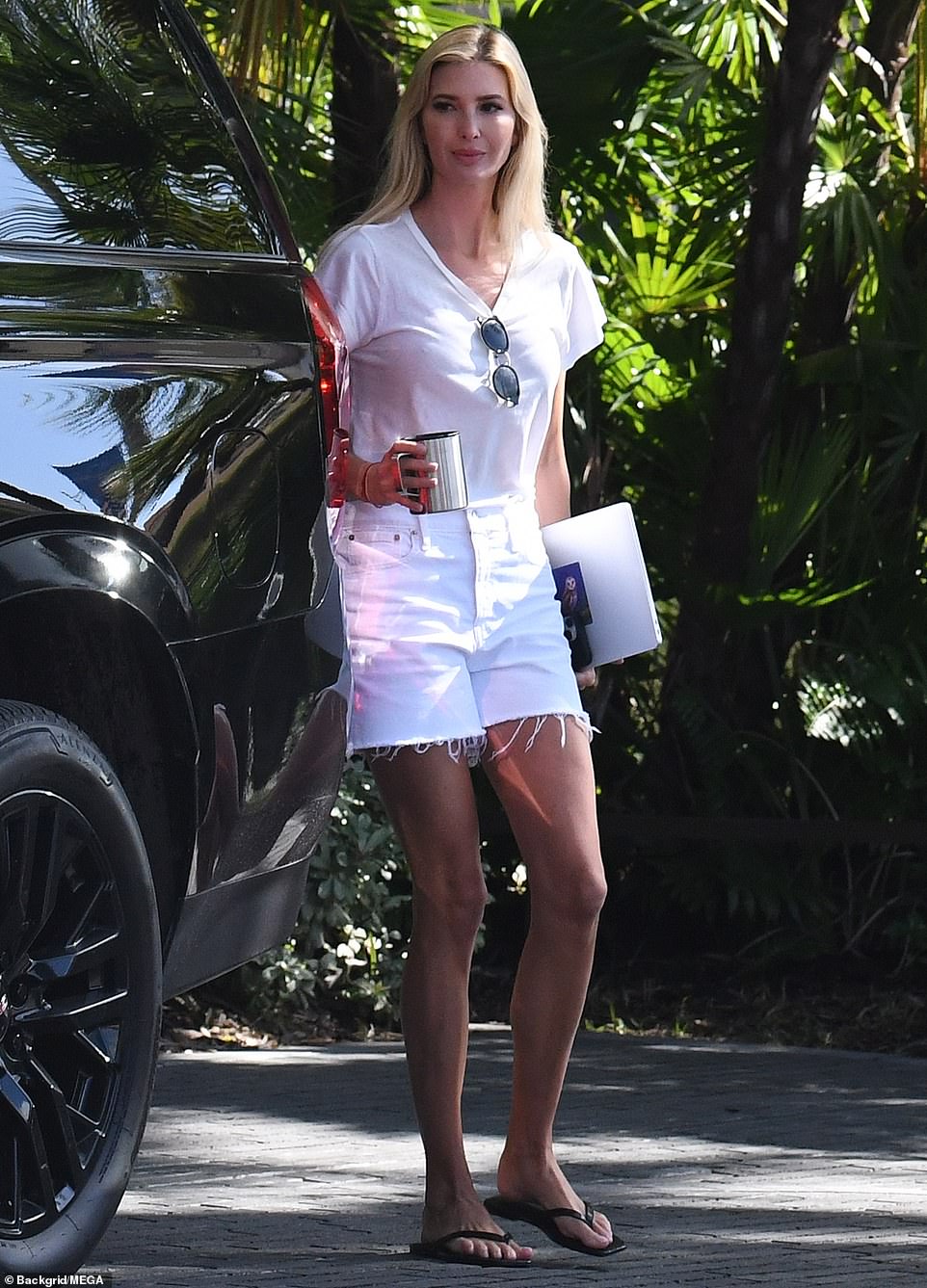 She kept her accessories simple, sporting just a single bracelet – a red string on her right wrist 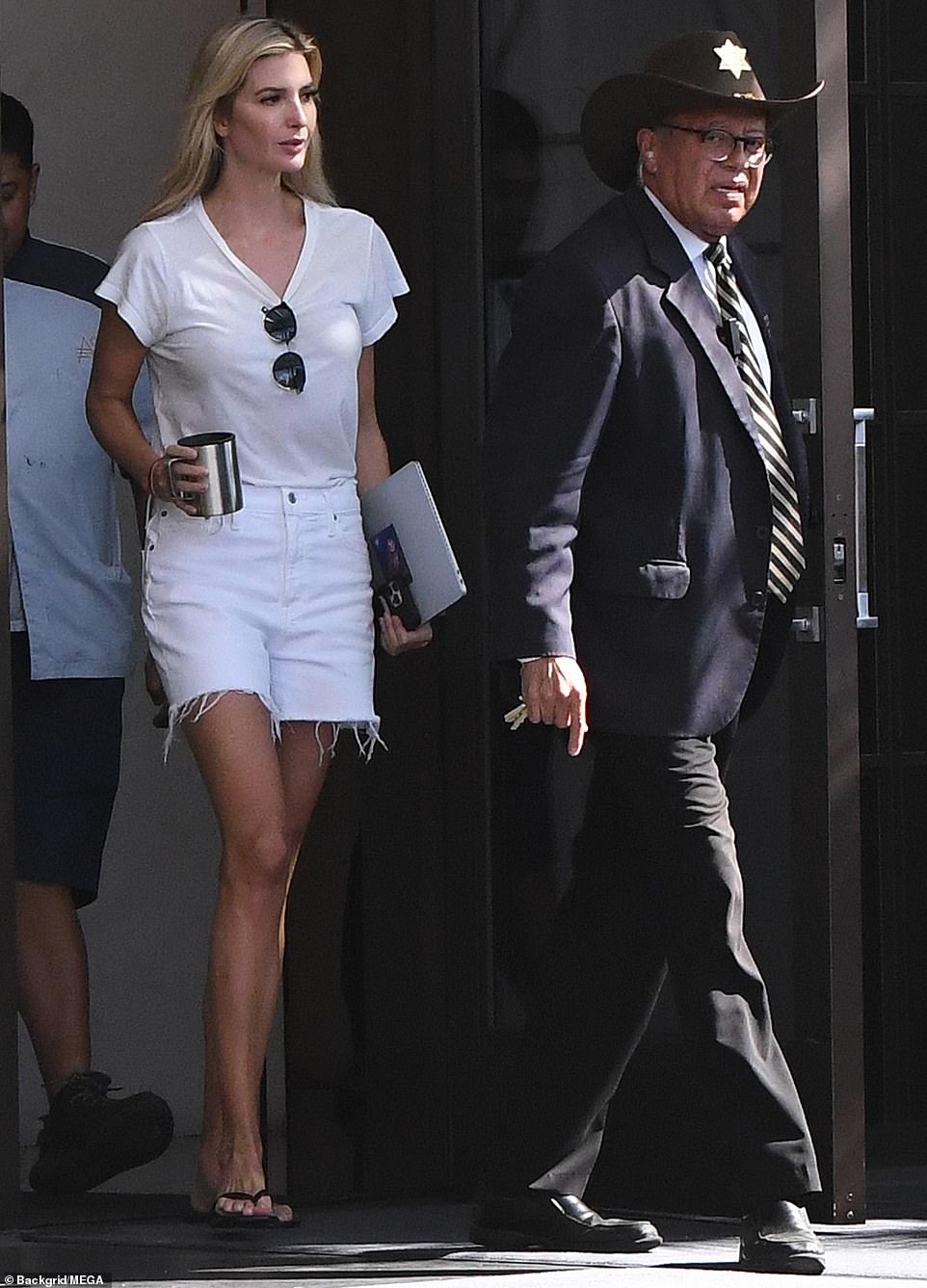 Ivanka also opted to go without a bag, instead carrying her laptop and her phone in one hand

‘Last night at Prague Castle, my brother Don and I had the honor to accept the posthumous first grade Medal of Merit on behalf of our mother, Ivana, from President Miloš Zeman,’ Ivanka wrote.

‘Born and raised in what was then Czechoslovakia, my mother grew up in Zlin, skied on the National Team and attended Charles University in Prague. Through her life she maintained a deep love and connection to the Czech Republic.

‘I know that mom would have been extremely honored by the recognition, as were we to be here in Prague to receive it on her behalf.

‘Thank you President Zeman for honoring her life and contributions yesterday.’

Ivana was born in the Czech Republic in the Moravian city of Zlín, which was known as Gottwaldov during the communist years.

She was born in Zlín in 1949, at the beginning of Joseph Stalin’s communist influence over the country, to electrical engineer Miloš Zelníček and telephone operator Marie Zelníčková.

Ivana started a modeling career in her home country before eventually moving to Canada and then to the United States.

Lara Trump, wife to Don Jr., told Fox News at the time of her passing that Ivana was only able to escape the communist country due to being a ‘world-class skier.’ 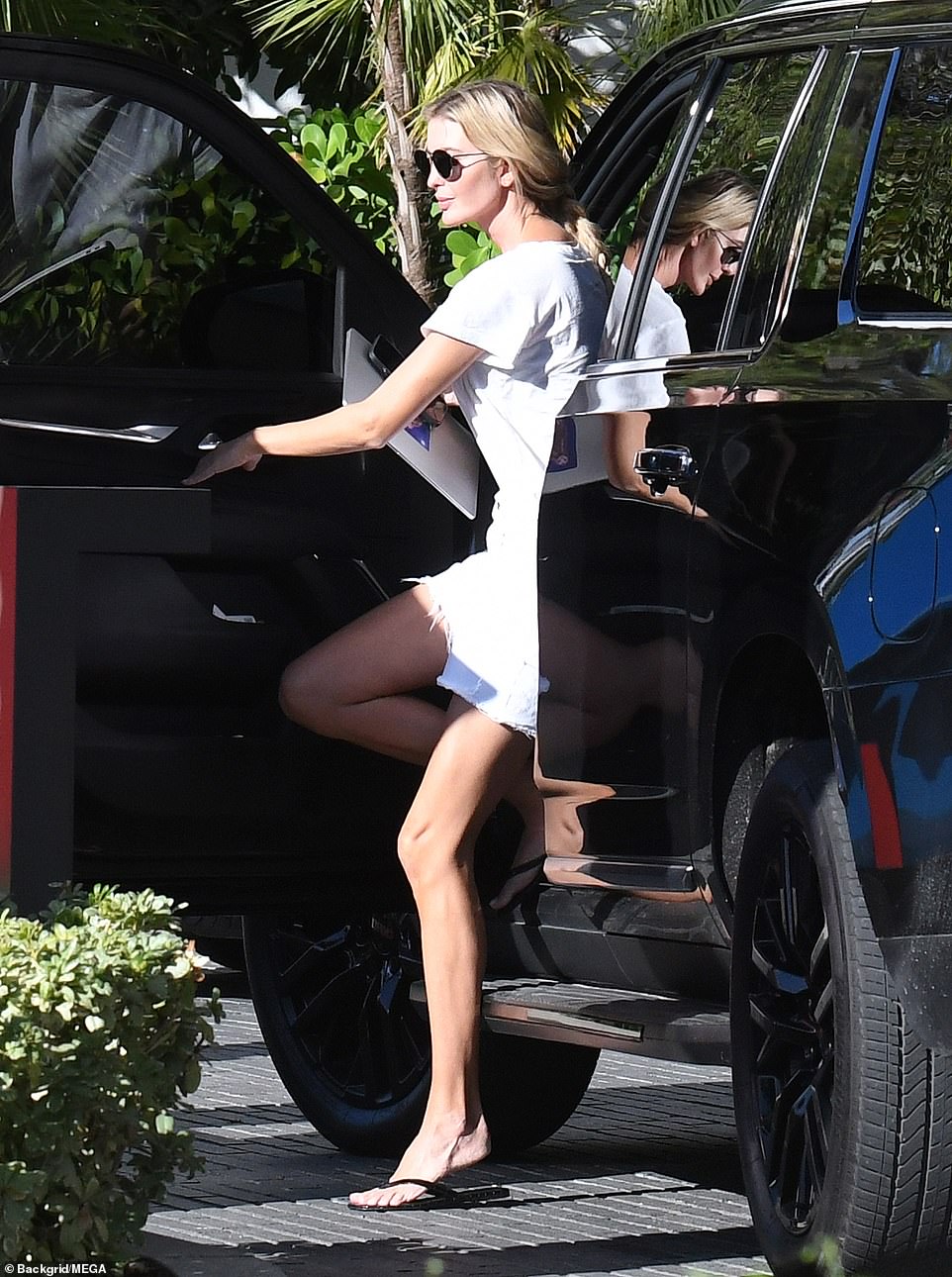 Not long after she was seen leaving the building, Ivanka returned home – where she was seen clambering out of the driver’s seat of her large SUV 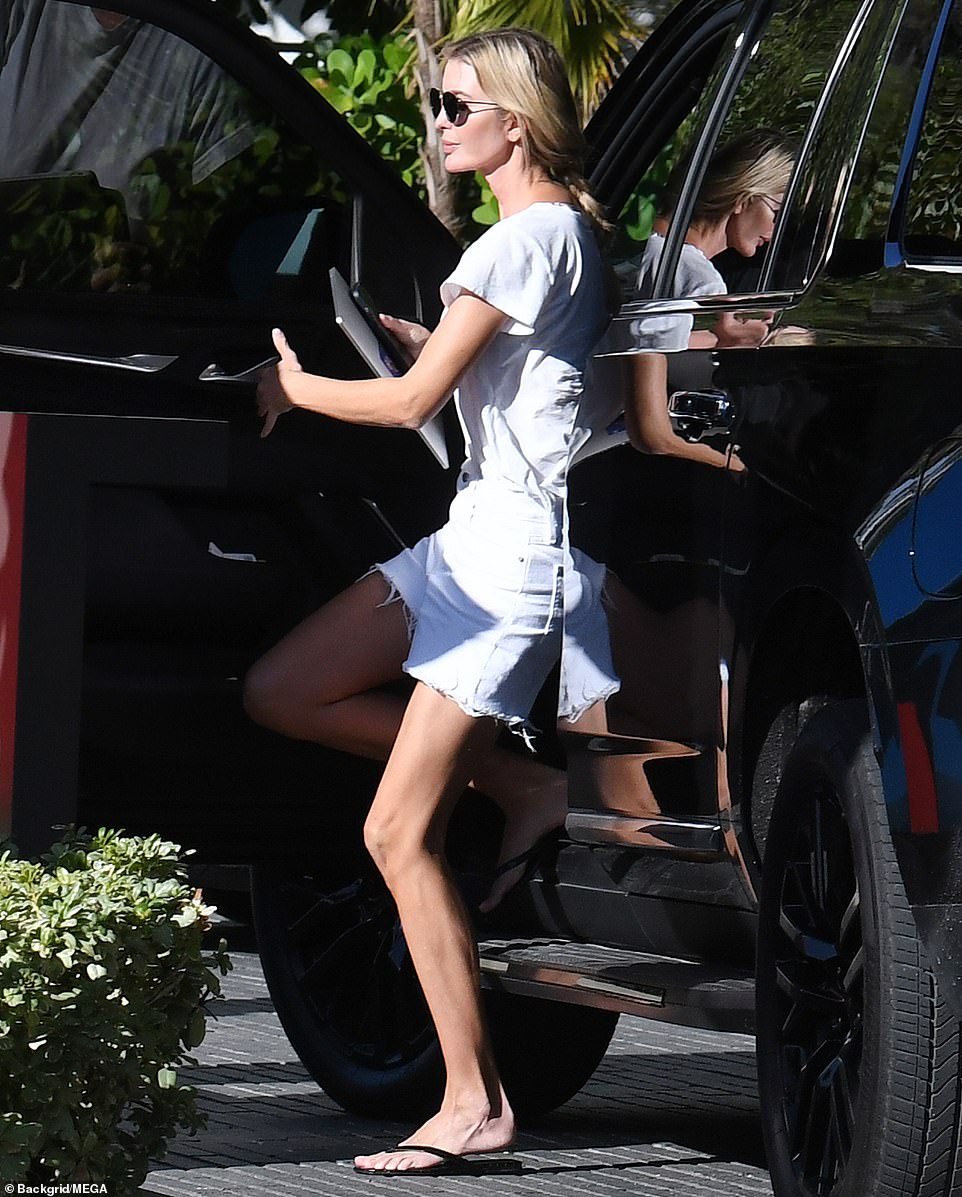 Taking full advantage of the warm Miami weather, Ivanka showed off her toned legs in her shorts 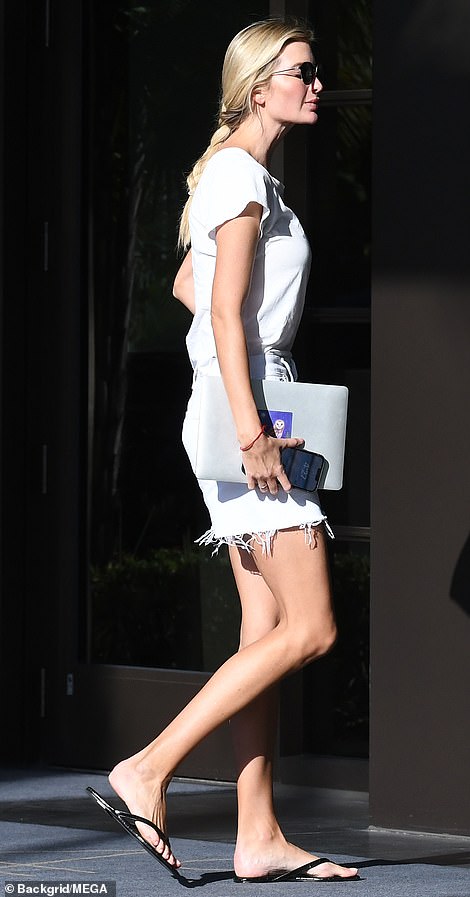 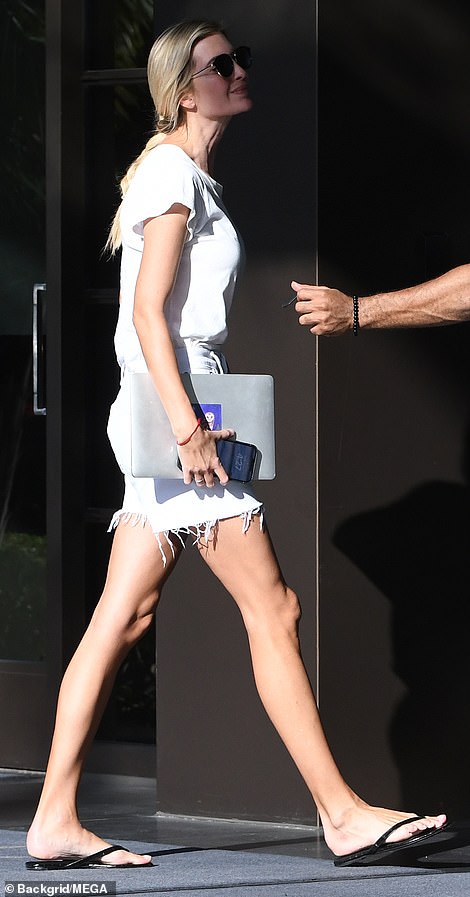 She got a warm welcome from one staff member, who held open the door for her

Independent Czechoslovak State Day is celebrated every year on October 28 to commemorate Czechoslovakia becoming a country after the first world war. Czechoslovakia would eventually split into two countries – the Czech Republic and Slovakia – in December 1992.

A month after Ivana’s passing, the medical examiner ruled she died as a result of a fall. She was said to have taken a tumble inside her $2.5million Upper East Side townhouse in Manhattan, where she was found at the base the staircase by a housekeeper.

The examiner said she died of blunt impact injuries to the torso as a result of the fall and it was ruled an accident.

At her funeral, the family displayed a few of her magazine covers, including her May 1992 Vanity Fair cover, which features her sitting on a yellow couch with the headline ‘Ivana Be a Star.’

The original cover featured Hillary Clinton’s name on the cover, with the headline ‘Will she get to the White House with Bill or without him?’

But the version on display at Ivana’s memorial on Lexington Avenue appeared without the headline, which was issued during Bill Clinton’s 1992 presidential campaign.

The photos also showed that the other two headlines on the cover of the Vanity Fair magazine remained on the version displayed at her funeral.

They were regarding conservative commentator Rush Limbaugh and the other about Imelda Marcos, the former first lady of the Philippines.

It is unclear exactly why the headline was removed from the cover at the funeral. Donald and both Clintons used to be friends, with Bill and Hillary both attending his wedding to Melania in 2005.

But the relationship soured when Trump ran against Hillary during the 2016 presidential election, and spread conspiracy theories about the couple. 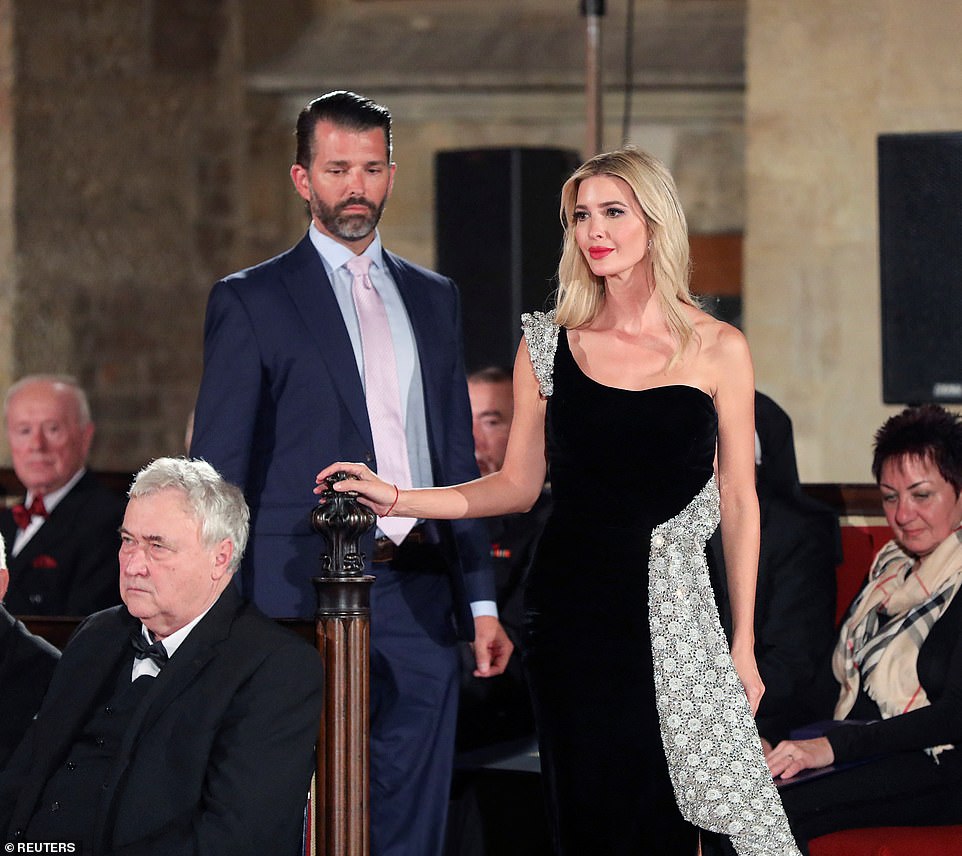 Her appearance in Miami on Monday comes just a few days after Ivanka and her brother Don Jr accepted a posthumous award for their late mother Ivana, who died in July at the age of 73 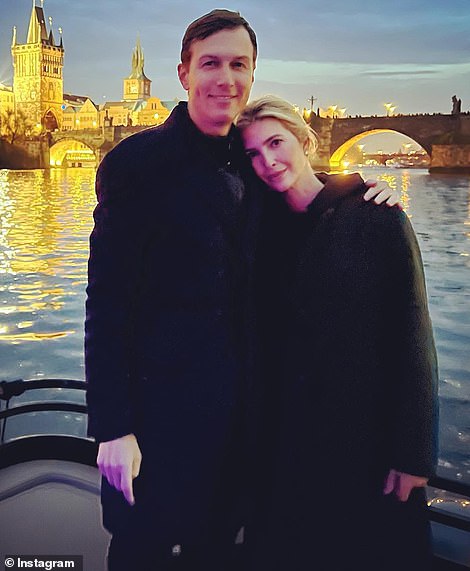 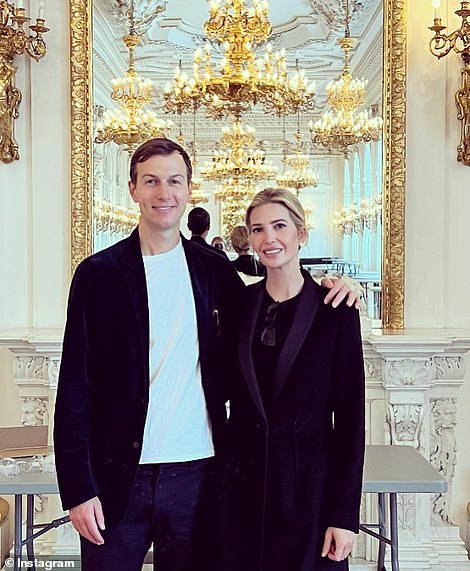 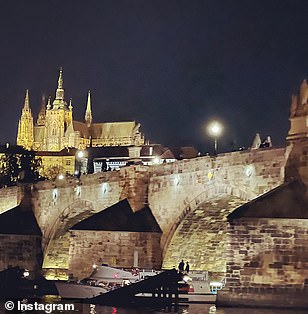 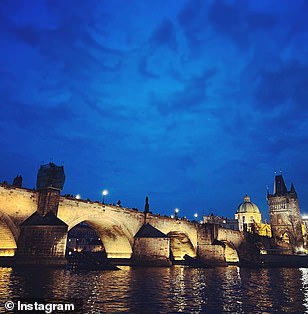 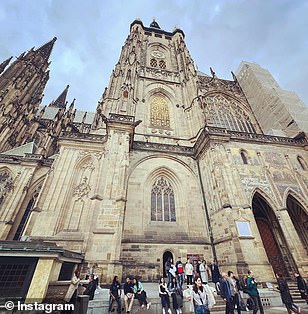 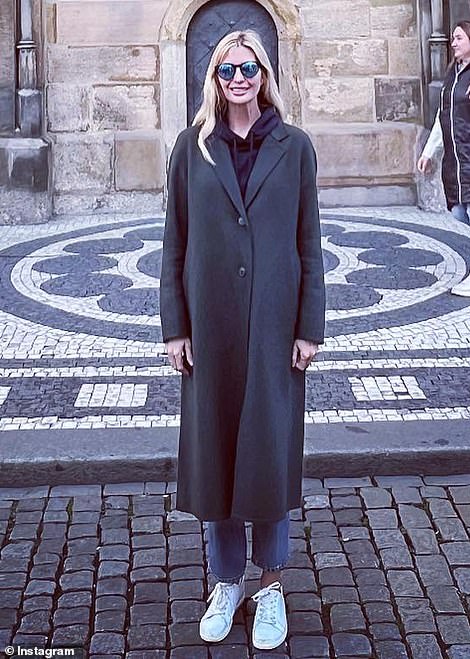 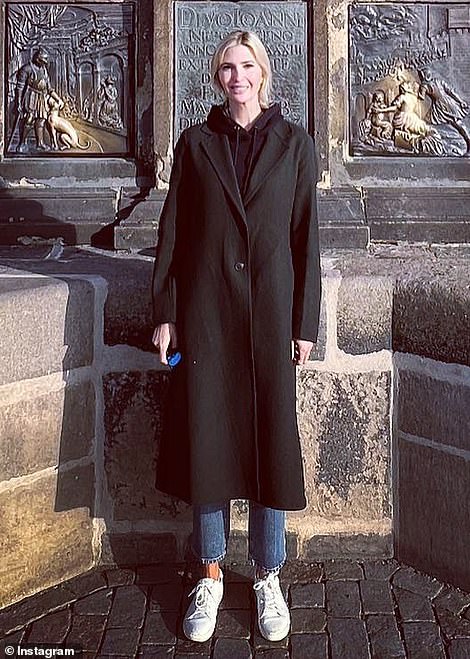 Ivanka posed up up in front of several landmarks while dressed casually in a black hoodie, jeans, white sneakers, and a long dark trench coat

All of Ivana’s children spoke at the two-hour Mass service on Wednesday in front of 100 mourners, including Donald, his wife Melania and their 16-year-old son Barron.

Ivanka told the crowd: ‘Growing up, my mother didn’t tell me a woman could do anything she wanted to — she showed me.

‘She was a trailblazer to men and women alike. My mother once told me there was nothing she couldn’t do in heels. She taught us how to spear fish and then cook what we caught. My mom expanded our minds.’

Don Jr. spoke next and delighted the congregation with fond memories and jokes. Before he returned to his seat, he said: ‘I love you, mom.’

Eric Trump, the youngest, spoke next: ‘She had brains; she had beauty. She was the embodiment of the American dream…

‘She was a force of nature, could beat any man down the slopes, any woman on the runway. She ruled the three of us [kids] with an iron fist but also a heart of gold.’

A mound of red roses lay before the altar, surrounded by 73 burning candles which symbolized each year of Ivana’s life.

After the service, Ivana’s body was carried out of the building in a golden casket, past her family and dozens of VIP guests.

In August, Ivana youngest supervised as removal men who took away her prized items. Among the many items that met their end was Ivana’s old Vogue magazines.