Home » ‘It doesn’t cut it’: Tourism sector hits out at Australia’s ‘border roulette’

‘It doesn’t cut it’: Tourism sector hits out at Australia’s ‘border roulette’

The tourism sector says it has been treated like a “second-class citizen” in the federal budget, warning that operators will go under before the government ever reopens the border to international visitors.

The government’s budget predicts the border will reopen mid next year but is based on the assumption that the vaccine rollout will be completed by the end of this year. 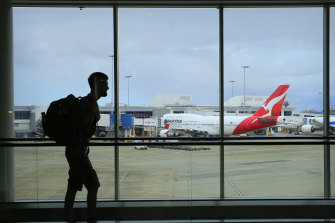 The budget papers assume that inbound and outbound international travel will remain low through to mid-2022.Credit:Getty Images

The government had previously declined to set out when the border would open or state a goal for when the population would be vaccinated.

The budget papers assume that inbound and outbound international travel will remain low through to mid-2022, after which “a gradual recovery in international tourism is assumed to occur”.

“The continued economic recovery will rely on the effective containment of COVID-19 outbreaks both here and abroad and will be a key factor in the timing of the reopening of international borders, which could weigh on the outlook for the tourism and education sectors,” the budget document warned.

Treasurer Josh Frydenberg told the ABC’s 7.30 that the assumptions were “cautious”.

Margy Osmond, from the Tourism and Transport Forum, said given the delays to the vaccine rollout, the sector needed more certainty from the government on its plan for opening up than the vague outline given in the budget.

“To say the middle of next year – it just doesn’t cut it,” she told The Sydney Morning Herald and The Age.

“We need to be able to prepare; I’m getting calls from international travel operators asking if we could have some certainty because we’d like to start making bookings.

“But it’s becoming border roulette, everyone in the government’s got a different attitude about when the border will reopen.

“We can’t recover without international borders being open, they need to address certainty and then skills and the level of support for things like attractions, otherwise they’ll go under and there will be nothing left for tourists to come and see and no staff to serve them when the border eventually does reopen.”

The international border closure is also creating a huge skills shortage, as workers who would ordinarily work in the agriculture, hospitality and other low-paying sectors have been shut out.

James Goodwin, from the Australian Airports Association, said the pandemic stimulus measures were masking the broader economic effects of keeping the borders closed.

“We urge the Australian government to work with industry and develop a plan to slowly and safely reopen the borders, starting with more travel bubbles with other COVIDSafe nations, similar to the arrangement we have with New Zealand, which is working well,” he said.

“Low national COVID-19 vaccination rates need to be rapidly lifted … to enable industry to work constructively with the government on a safe, if staggered, future border re-opening timetable.”

The government had previously given up on setting out a new goal for vaccinating the population for COVID-19 after failing to achieve its target of rolling out 4 million jabs by April.

So far 2.7 million vaccinations have been administered. The government has struggled to secure supplies after ruling out the AstraZeneca vaccine for anyone aged below 50 and dropped its target of delivering a first dose to all adults by October.

Labor’s treasury spokesman Jim Chalmers said the budget was hostage to the vaccine rollout being complete by the end of the year. He had little confidence in the government’s ability to deliver, based on their initial performance.

“No wonder the tourism sector is angry when so much of their business was counting on the Prime Minister delivering here,” he said.

“This budget is hostage to the vaccine rollout and we know how comprehensively the government has already failed in meeting its early goals.

“Scott Morrison needs to do more than just assume the vaccine rollout will be achieved by the end of the year but show how he can guarantee this so the economy can be reopened safely.”

The budget papers show funding for repatriation flights and extra consular assistance for Australians stranded overseas as a result of the border closures. The $119.9 million has been allocated until 2024-2025.

The budget did not allocate funding for new quarantine facilities, despite repeated calls from some of the Labor premiers, the federal opposition and crossbench MPs.

Independent MP Zali Stegall said she was “disappointed” the budget failed to provide any solution to opening the borders sooner.

“Given the situation globally and the pace of the vaccine rollout domestically, it is difficult to see us opening the borders until well into 2022 without a different approach to quarantine,” she said.

“The Morrison government has announced $487 million for quarantine in the Northern Territory but no new facilities nationally.

“This would have been a serious investment in the development of a national federal quarantine system and would have demonstrated a commitment to resuming trade, investment and tourism.”