More than 10 inches of snow were dumped on Lubbock, Texas, as an intense winter storm slammed the state and moved toward the Southeast, threatening millions in its path. The same storm dumped heavy rains on Los Angeles earlier in the week.

The storm tore through Texas, dumping snow and unseasonal heavy rain, CBS News’ Janet Shamlian reports.  Travel grinded to a near-standstill as plows and tow trucks became a lifeline for those caught off guard.

Overnight, heavy rains hammered Houston.  Roads and highways turned into fast-moving streams  as sewers backed up and overflowed.  First responders used a high-water rescue truck to help these drivers after they stalled on a flooded city street.

With the warnings widespread, many taking no chances.

“Getting candles for sure, batteries for flashlights and headlamps,” said Stephanie Cantu. “I already have my propane stove ready just in case.” 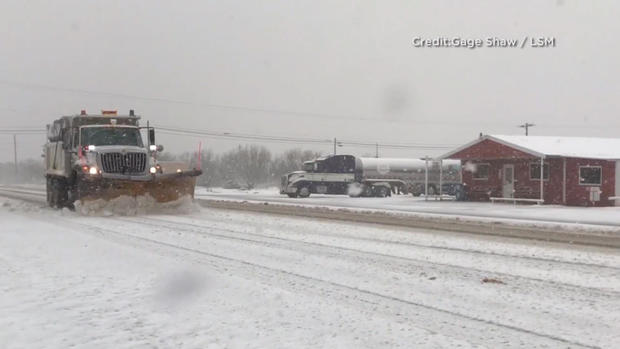 Around 1,724 were without power in Texas as of Saturday afternoon. There were 10,195 total flight delays reported, according to FlightAware, and 809 cancellations.

Officials told KHOU the elevated structures in these areas could be cut off for several days. The river is expected to rise to threshold levels by Saturday afternoon and reach its peak crest Monday evening. It is forecasted to remain above flood stage into Wednesday, and officials say some residents may be cut off for 4 to 5 days.

The high water that swamped roads and bayous in Houston is already draining away, but the system is now targeting the Carolinas with snow and bitter cold.

Governors in Virginia and North Carolina already declared emergencies. Up to 18 inches of snow could fall in the Carolina mountains.

A winter weather advisory is in effect from Texas to the Carolinas, said CBS Minnesota meteorologist Lisa Meadows.

Virginia Gov. Ralph Northam announced Saturday he’d declared an emergency to help state agencies prepare for a storm that’s expected to hit hard the southern part of the state. North Carolina Gov. Roy Cooper issued his declaration Friday and said impacts of the storm would vary across the state. Forecasters are calling for up to 18 inches of snow in the mountains and possible flooding at the coast.

“Snow may be beautiful but it can also be treacherous and I urge North Carolinians to take this storm seriously and get ready for it now,” Cooper said in a statement Friday.

The National Weather Service said Saturday the heaviest snow is expected in northwest North Carolina and southern Virginia. The weather service said a “prolonged period of snow is expected” to begin as early as Saturday evening and lasting until Monday. 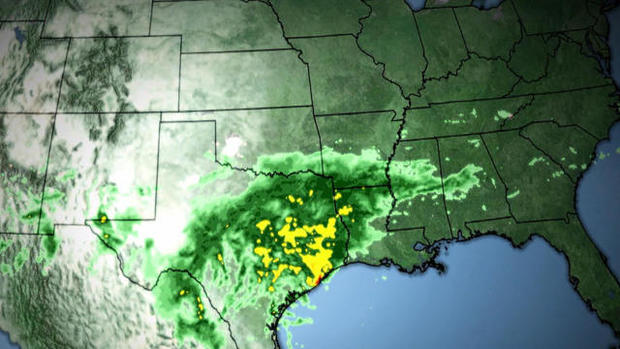