It was big news when music finally came to Instagram earlier this year — but in news that should surprise absolutely no one, the initial arrival of tunes to your Stories was just the beginning. Tons of new music features are coming to Instagram Stories soon that not only build on the functionality of the app’s existing music integration, but also add something else to the mix: The ability to use music with the questions sticker. Thanks to these new additions, you’ve got yet another way to interact with your followers — and the language used by this method is universal, too. Who doesn’t love a good tune?

Both the questions sticker and the ability to add music to Stories arrived during the summer of 2018 — the questions sticker in July and the music-in-Stories feature a few weeks earlier at the end of June. Both features do pretty much what you’d expect them to: The questions sticker, which can be added to any Instagram Story the same way you add any other detail (GIFs, emojis, etc.), allows you to give your viewers a prompt to which they can respond directly in your Story, thereby enabling a whole new way to engage with your followers; meanwhile, the music-in-Stories feature lets you add a musical soundtrack to any photo or video in an Instagram Story from directly within the app — no need to employ a separate app for that purpose. The music feature does have some limitation — you can’t just use any old song; it has to be one offered by Instagram’s built-in music library — but overall, it’s a much more convenient way to add some tunes to your Stories. 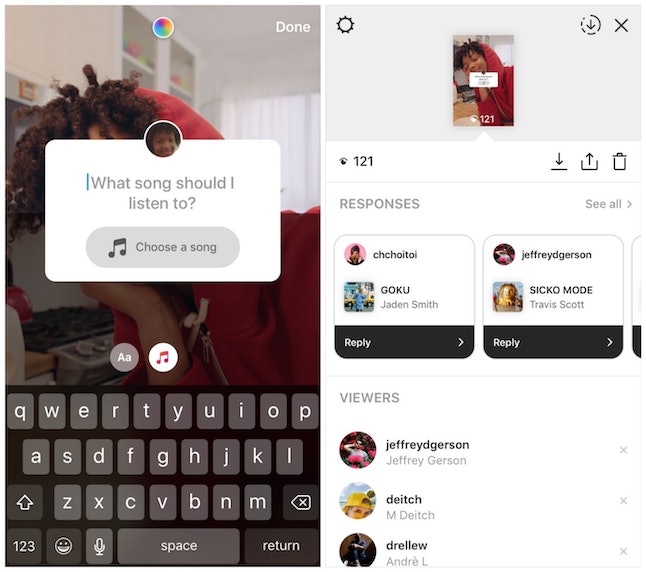 The new feature combines these two previously released options, allowing your followers to respond to prompts posed by questions stickers with songs. To use it, just pop a questions sticker into your Story like you usually would. When you do, you’ll notice that there’s now a little musical note icon. Select that, and when your followers respond to your question, they’ll be able to do so with a song pulled from Instagram’s music library. Tapping your followers’ responses will let you listen to the songs they picked out. You can also share your favorite responses to your Story, as well as take photos and videos with the songs playing.

But while the ability to use music in conjunction with questions stickers is the biggest of the new additions, Insta is also launching a bunch of visual effects for its musical features that respond to both beat and sound. If you swipe to “Music” while in camera mode, the icons for these new effects will be situated above the camera capture button. If you’re forever fascinated by music visualizers — like, uh, me — this one’s for you. 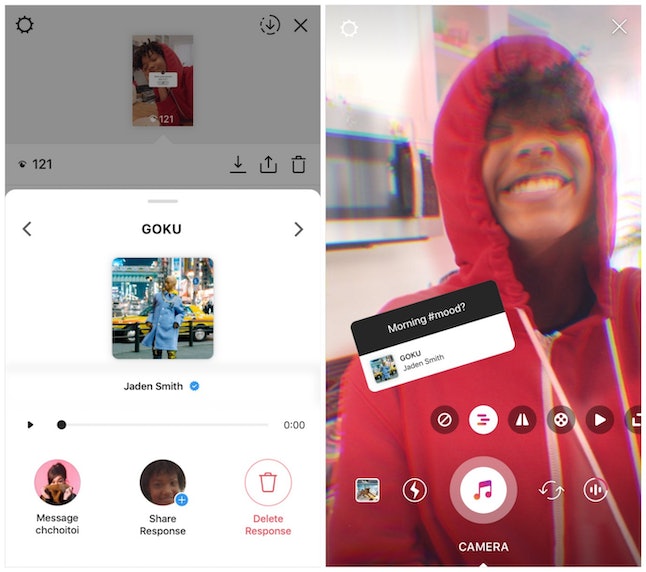 The new music-in-Stories features will begin rolling out for both iOS and Android users starting today. (Note, though, that new Insta features usually roll out gradually, so don’t panic if you don’t have these ones immediately; if you’re in a region where the Instagram music library is available, you’ll be getting them eventually.) And be on the lookout for other new features, as well; the questions sticker will soon be compatible with Instagram Live, while an interactive countdown sticker will be making its debut in Instagram Stories. Don’t forget to update to the latest version of the app. Happy ‘gramming!