Inside the Princess Diana statue unveiling as Harry beams alongside William 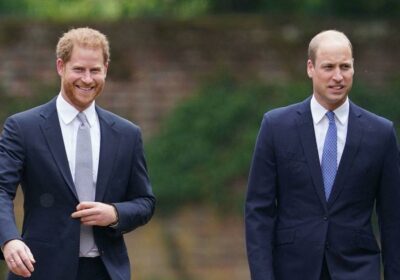 Prince William and Prince Harry have unveiled the statue of their late mother, Diana, Princess of Wales, in a private ceremony.

William, 39, and Harry, 36, walked side-by-side for the unveiling on Thursday 1 July in The Sunken Garden at Kensington Palace, London, on what would have been their mother’s 60th birthday.

The special ceremony also marked the first time that the brothers had come face-to-face since the funeral of their grandfather Prince Philip in April.

In a joint statement, the brothers penned a heartfelt social media post alongside a picture of the pair gazing up at the statue.

It read: “Today, on what would have been our Mother’s 60th birthday, we remember her love, strength and character – qualities that made her a force for good around the world, changing countless lives for the better.

“Thank you to Ian Rank-Broadley, Pip Morrison and their teams for their outstanding work, to the friends and donors who helped make this happen, and to all those around the world who keep our mother’s memory alive — Prince William and Prince Harry.”

William and Harry beamed as they walked side-by-side ahead of the unveiling of the statue.

The brothers, who wore dark blue suits for the ceremony, appeared to share a joke at one point with Harry laughing as he turned to his elder sibling William as they walked towards The Sunken Garden.

Princess Diana’s brother Charles Spencer, 57, and her sisters Lady Sarah McCorquodale, 66, and Lady Jane Fellowes, 64, were also in attendance at the ceremony.

William and Harry looked delighted to be reunited with their aunts and greeted each other with a kiss on each cheek.

In a sweet moment, Lady Sarah appeared to whisper something to Harry as she held onto his shoulder.

Together, the brothers pulled a large green cloth from the statue, with Harry grinning as he held onto the material.

William was heard saying “ready?”, before he and his younger sibling pulled off the cloth and the guests applauded.

The Sunken Garden at Kensington Palace was a favourite place for Diana, Princess of Wales, and will be the permanent home on the statue.

The beautiful walled garden has also been re-designed with over 4,000 flowers, including 200 roses, 500 lavenders 300 tulips 50 sweet peas, 100 dahlias and 100 of Diana’s beloved forget-me-nots, that reflect her favourite blooms.

Garden designer Pip Morrison devised the layout and planting scheme before the garden and estate team at Historic Royal Palaces brought the visions to life.

Harry and Meghan chose to take their royal engagement photographs in The Sunken Garden at Kensington Palace in November 2017, as a touching tribute to Diana.

Who designed the statue?

The statue has been designed by world famous British sculptor Ian Rank-Broadley.

Ian is an acclaimed sculptor who has also produced designs for British coinage.

The 69 year old sculptor won a Royal Mint competition in 1997 to design a new effigy of Queen Elizabeth II that appeared on coins dated from 1998 until 2015.

In 2002 he won a second Royal Mint competition to design the Queen Mother Centennial crown coin.

Meanwhile in 2007 Ian created a joint portrait of the Queen and Prince Philip to celebrate the 60th wedding anniversary.