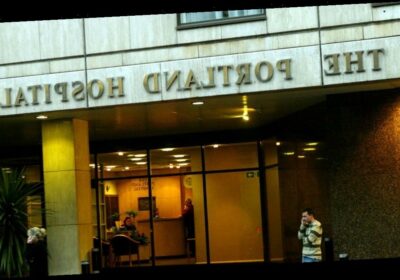 The Portland Hospital in London is one of the top private maternity hospitals in Europe.

It's known as one of the best and most exclusive place to give birth, and its clientele includes Victoria Beckham, Megan Markle and, most recently, Dani Dyer.

Giving birth in the Portland will set an average new mum back a minimum of £15,000.

When the hospital was featured on BBC's Five Star Babies in 2018 Chinese ‘it-girl’ Liu Hui said she expected to spend £30,000 on the whole experience.

Other famous clients include Jools Oliver, Liz Hurley and Sarah Ferguson, the Duchess of York.

The private hospital offers new mums a celebratory meal following the birth of their child of champagne, lobster and foie gras if they so wish.

At no point do the new mums share a ward and following the birth they are whisked into private rooms, complete with a bed for their partner.

They are then cared for round the clock by midwives who can feed their new babies in the hospital’s nursery if the mum needs some sleep.

The rooms each have en suite bathrooms and come fully stocked with slippers and Molton Brown toiletries.

A physiotherapist will also visit the mother after birth to offer support and suggest required postnatal exercises.

The hospital's 10 chefs are then on hand to prepare something off their luxurious menu that changes seasonally and is tailored to each woman’s individual dietary requirement.

The hospital boasts a ‘hotel experience’ for its clients and the kitchen staff are headhunted straight from London's Dorchester hotel.

Upon leaving the hospital, new mums are given a goodie bag believed to contain an invitation to a professional mother and baby photoshoot, more champagne and luxury toys.

As described in Megan and Harry’s book Finding Freedom, the hospital prides itself on its privacy and security.

"Portland Hospital offered not only state-of-the-art care but also an underground entrance where blacked-out SUVs driving in and out were the norm," the book reports.

According to the biography, Meghan “never considered” giving birth at the Lindo Wing where Kate Middleton had delivered all three of her children because she “wanted something more discreet.”

However, when Lily Allen gave birth there in 2011, she questioned the hospital's discretion and security.

Speaking about her experience at the Portland to The Guardian, the pop star said that a tabloid journalist had somehow learned her baby's sex and weight before she had even called her mum.