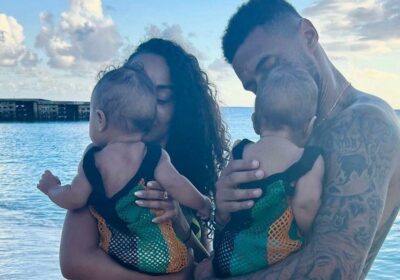 The 29 year old has been engaged to her footballer fiancé for two years after Andre, 30, popped the question on their fourth anniversary in a romantic lockdown proposal.

Leigh-Anne and Andre have been incredibly busy since the singer said "yes" to her beau – with Leigh-Anne becoming pregnant and giving birth to her and her hubby-to-be's twins.

Black Magic singer Leigh-Anne has also been busy with her career in recent months from her first movie role in festive rom com Boxing Day and her Confetti tour with her band.

However, now Leigh-Anne and her fellow bandmates are on a hiatus she has a little more time on her hands – possibly enough time to walk down the aisle.

As Leigh-Anne and Andre reportedly plan to say "I do", OK! takes a look at their sweet relationship…

When did Leigh-Anne meet Andre?

The pair are said to have met back around mid-2016.

Around that time, speaking about a future with the Watford striker, Leigh-Anne told Metro.co.uk: “It’s not something I’ve actually really thought about because we’re always so busy, but it’s in the back of my head.

"If I wasn’t in Little Mix we probably would have started planning already. We’re both really excited so when the time comes, then yeah, we’ll be ready."

Whilst Andre has been making more appearances on Leigh-Anne’s social media, the couple tended to keep loved-up selfies more few and far between at the start of their romance.

The pair first went public with their relationship on 29 January 2017, with pop star Leigh-Anne sharing a snap of them together, captioned: “Gonna miss this one,” followed by a broken heart emoji.

Fans of the star were quick to ask who the mysterious man in the photo was, and then Leigh-Anne shared another photo of her footballer boyfriend the month after, writing: “So he hates cheesy captions.. but i'm a cheeseball.. and so is he low-key. but I f***ing love this boy.. my actual [world emoji] miss him too much.”

Proving herself to be very serious about her boyfriend and admitting she loved him, things looked like they were going very well for the pair.

In the adorable photo, Leigh-Anne can be seen snuggling up to Andre.

In that same year, Andre flew out to the USA to surprise Leigh-Anne while Little Mix were supporting Ariana Grande on the Dangerous Woman Tour.

In a photo shared to Instagram, the star could be seen with her legs wrapped around Andre as they embraced one another.

Leigh-Anne and Andre jetted off for their first holiday together in June of 2017, with both of the stars finding time in their busy work schedules to enjoy some quality time.

In dreamy pics, Leigh-Anne showed off her sensational bikini body whilst posing alongside Andre, with views of sand and sea in the background.

The loved-up pair wowed on the Brit Awards red carpet in 2018, which was their first red carpet appearance together – a milestone for any celebrity pairing!

Leigh-Anne could be seen wearing a white robe-like gown, holding a white rose, whilst Andre looked suave in all black.

In December 2018, the adorable couple decided it was time to move in together.

Leigh-Anne shared a photo on Christmas Day writing: “Sometimes I wish I could put it into words.. but I just can’t…

“I couldn’t love you anymore if I tried. First Christmas in our new home together.. Merry Christmas everyone from our family to yours.”

On 28 May 2019, Leigh-Anne and Andre celebrated their third anniversary, with the Little Mix star writing a gushing tribute to her love.

She penned: “It doesn’t make any sense unless I’m doing it with you… My right arm, my escape from the world and my soul mate.

“Where the hell has 3 years gone? All I know is I’m ready for the rest of my life with you. Happy Anniversary you beautiful soul.”

The sultry shot sees Leigh-Anne sitting on Andre’s lap and in a series of other images shared, we see behind-the-scenes pictures of Andre appearing in the Little Mix music video for song Think About Us.

In May 2020, on their fourth anniversary, Andre popped the question during a sweet lockdown engagement at their shared home.

Leigh-Anne looked ecstatic whilst donning a red off-the-shoulder dress and held up her hand to flash a giant diamond-encrusted rock towards the camera.

Andre looked equally thrilled as he wrapped his arms around his new fiancée for the camera.

One of the pictures he shared revealed the moment he got down on one knee to propose to the singer, as the scene showed Leigh-Anne sitting under a blanket with her hands covering her eyes in shock.

Andre captioned it: "Let the caption speak for itself this time," alongside a red heart emoji and a diamond ring emoji.

He added in Spanish: "Hasta la muerte," which means, "Until death".

Manchester City footballer Tosin Adarabioyo wrote: "Congrats bro," [sic] with an emoji of hands up in the air.

While Rak-Su singer Jamaal Shurland added: "Congratulations to you both".

In May 2021, Leigh-Anne delighted fans as she announced she was pregnant with her first child.

The singer shared a series of gorgeous photos of herself wearing an emerald green silky gown and embraced her bump on her Instagram to share the news.

She then wrote in the caption: "We've dreamed about this moment for so long and we can't believe the dream is finally coming true… we can't wait to meet you."

As Perrie announced her baby joy, Leigh-Anne gushed in the comments: “Arghhhhhhhh so so so happy for you both! And so bloody happy we get to go on this journey together! Love you so much” next to a string of heart emojis.

Leigh-Anne shared a string of photos throughout her pregnancy, confidently embracing her baby bump but kept the details of her pregnancy under wraps.

Three months after announcing she was expecting, Leigh-Anne had another surprise in store for fans as she announced she and Andre had become parents of twins.

As she posted a black and white photo of her newborns' feet, she gushed in the caption: "We asked for a miracle, we were given two…

Stand by your woman

Andre rarely speaks about Leigh-Anne in public, as the pair are incredibly private about their romance.

But, during The X Factor star's 30th birthday celebrations, the footie star gushed over Leigh-Anne and had a stark warning for trolls amid her fall out with Jesy Nelson.

In the speech after Leigh-Anne had spoken to the crowd, Andre told party-goers: "We haven't finished yet, it's my turn… If anyone has anything to say, come and find me," Andre began while the crowd of Leigh-Anne's family and friends cheered on.

In a loud and clear message to online keyboard warriors, Andre explained: "The one thing I will do in my life is protect my family."

Andre continued: "If you blogger d***heads want to come and talk, if you try and disrespect my baby mama, my wife, my kids, there is a going to be a problem."