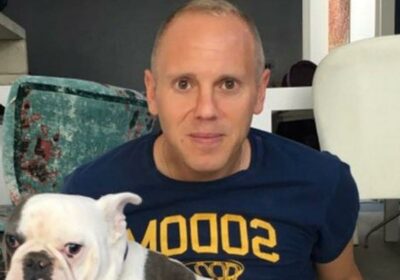 Judge Rinder made his Good Morning Britain debut today covering for Richard Madeley, much to the approval of the show’s viewers.

The TalkRadio host hosted his first full programme as an anchor alongside Susanna Reid, which has left many fans keen to find out more about the TV star.

When he isn’t filming or working as a barrister, Rob Rinder, lives in a plush London home that he shares with French bulldog Rocco.

He divorced his husband Seth Cummings in 2018, and since then has established a plush bachelor pad for himself.

Rob Rinder lives in London’s posh Islington and admits that he is ‘unashamedly spoilt’.

His living room can be just about seen in snaps taken as the criminal barrister is about to embark on some yoga in pictures shared on social media.

In another, fans spied that Judge Rinder’s property is also home to a white baby grand piano.

During an appearance on Lorraine, viewers were given a sneak peak of his home office set up which includes some artwork on the walls and an orange desk chair.

Despite the clearly stylish surroundings, the legal expert has previously said he doesn’t consider himself to have any home style.

Speaking to The Times, he said: "Truth is, I’m the gay that style forgot; friends with kids call my house my cathedral to gay selfishness. It’s filled with art. I tend to buy artwork after particular legal cases."

Indeed, framed artwork can be seen throughout the modern home.

Rob also offered a glimpse into his house appearing on Celebrity Gogglebox alongside Susanna Reid.

This Morning on Good Morning Britain, Judge Rinder hit the headlines after ripping into Prince Harry during a discussion about recent comments the royal made about the British press.

Judge Rinder fumed: "I want to be clear, I like Meghan and Harry, her views might not be your cup of tea, fair enough.

"But my question is, if he's worried about misinformation, what about the fact him and Meghan have taken a huge deal from Netflix and the misinformation about his late mother, Lady Diana, and they've taken millions of pounds.”

However, Rob’s criticism of Prince Harry sparked some anger from GMB viewers.

With one saying: "What is the obsession with Prince Harry #gmb? Get a sense of proportion!!"