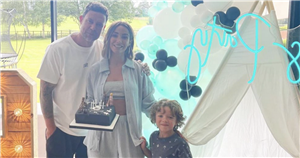 Frankie Bridge has given a glimpse into the sweet birthday celebrations for her six year old son Carter.

The Saturdays songstress, 32, who shares sons Carter and Parker, seven, with her former footballer husband Wayne Bridge, shared a collection of snaps with her 1.3million Instagram followers of the special day for her youngest son.

Mum-of-two Frankie organised for an indoor teepee for her little boy with a bright blue neon sign that read: "Let's party".

The brunette beauty also set up a sweet grazing picnic table for Carter and 11 of his friends in the living room at their sprawling Surrey home. We can see that Frankie laid out rugs and cushions of the floor for the guests along with a huge light-up six and blue balloon arch for her birthday boy.

Frankie and Wayne looked every inch the doting parents as they posed for a family snap with their little boy and his birthday cake.

The six year old was also treated to a surf stimulator bouncy castle in the garden with Frankie seen trying her best to stay on the board. Meanwhile her eldest son Parker appeared to be a natural and Frankie penned: "Just like his dad. Good at everything."

Captioning the snaps, she penned:"He may be 6… but he’s still my baby and he knows it. my little best mate… he makes me laugh everyday… Mummy cuddles are still life… and he still believes in all the magic my little bear. Don’t ever change…"

It comes after Frankie appeared on Loose Women with her sister Tor Cook, who lives in Bermuda, in May.

Her sister spoke about having had four miscarriages and going through IVF during the coronavirus pandemic. Although Tor now has twin boys, Frankie said that she had been overcome by guilt during her sister's struggle to have a baby.

Frankie said: "It was difficult for both of us, we've always been really close and Tor knew that I always was going to settle down and have babies at quite a young age.

"It wasn't really until she was ready to have kids and then going through her struggles that it was really hard.

"I didn't always know what the right thing was to say and I would often feel guilty being around her with my boys because there was one point, Tor, where we came over to Bermuda to see you and you were pregnant at the time and you miscarried the baby while we were there."

Frankie admitted: "As much as you said that it was nice we were there as a distraction, I couldn't help but feel guilty that we were there almost rubbing Tor's face in my kids."

But Tor reassured her, saying: "I didn't feel like that at all. It was nice to take my mind off it and have family around me."