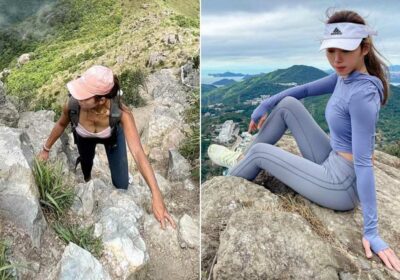 A Hong Kong Instagram star tragically plummeted to her death after she slipped while snapping a selfie at a waterfall.

The shocking incident occurred after Sofia Cheung, 32, and three friends embarked on a trip to Ha Pak Lai park around 11 a.m. Saturday, the Sun reported. The influencer had decided to take selfies at the edge of a waterfall at the park’s Pineapple Mountain site — a locale popular with hikers at sunset — when she apparently lost her footing and fell into the 16-foot pool below.

Cheung’s horrified friends promptly called emergency services, who quickly arrived and whisked the woman to the hospital, where she was pronounced dead on arrival, according to the Sun.

The intrepid gal had frequently posted pics of herself posing on the edges of steep cliffs to her Instagram account, where she included the tagline, “Life should be fun not dumb.”

Cheung’s last-ever Instagram pic, from July 9, depicted the bombshell sitting in the surf while holding a boogie board. The caption read, “Better Days are coming. They are called: Saturday and Sunday.”

The haunting photo has since been inundated with condolences, with one bereaved fan writing, “RIP don’t wanna believe this happened to you.”

Another lamented, “thought better days are coming when Saturday and Sunday? will gonna miss your chat every day. I love you always. rest in peace my pretty sofi.”

Cheung’s not the first to perish while snapping an ill-advised pic. This past January, an Indian woman plunged to her death while taking selfies near a waterfall.

And, in a harrowing incident last year, a Kazakhstan woman died after plummeting over 100 feet off a cliff in Turkey while posing for a photo to commemorate the end of the local coronavirus lockdown.