Home » Lifestyle » In the deep end: The swimming pool in Australian art

In the deep end: The swimming pool in Australian art 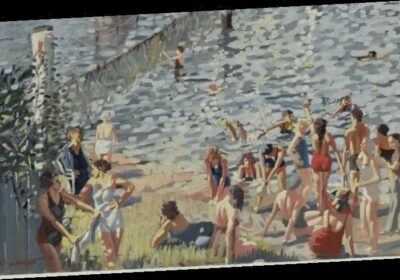 When David Hockney moved to Los Angeles in 1964 it was the swimming pools that made the most vivid impression. He had noticed them from the air – thousands of small patches of bright blue. No desirable Hollywood property was complete without one.

The swimming pools of LA were the most tangible point of difference with the England the artist had left. Growing up in Bradford the only pools had been public ones, where everyone mucked in together – the sleek blue pools of California were symbols of private pleasure. For Hockney this meant one could gaze at length upon lithe male bodies rather than snatch furtive glances. In England, homosexuality was illegal until 1967, but LA allowed a freer, more permissive lifestyle.

Beyond the implicit eroticism, the enjoyment of the sunshine and the water, Hockney’s analytical mind began to consider the aesthetics of the swimming pool. He told an interviewer: “Water in a swimming pool is different from, say, water in the river, which is mostly a reflection because the water isn’t clear. A swimming pool has clarity. The water has transparency and drawing transparency is an interesting graphic problem.” 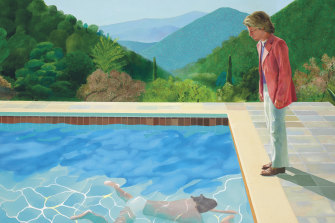 David Hockney’s 1972 Portrait of an Artist (Pool with Two Figures).Credit:AP

Every artist who has tried to depict a swimming pool – and in Australia there must be hundreds – will testify to the difficulties of capturing the play of light on water, the distortions of half-submerged limbs, and the right balance of geometric rigidity and implied motion. Most of Hockney’s swimming pool pictures are exercises in severe graphic design offset by rippling waters and tanned bodies.

Such challenges have been met by Martine Emdur, in an epic series of paintings in which anonymous swimmers cavort in cool, blue-green depths, illuminated by shafts of sunlight. In contrast to Hockney, Emdur adopts a submarine perspective, studying her swimmers from the bottom of the pool. That point where water meets air forms a vivid, highly reflective plane at the top of a picture. Her swimmers’ heads are usually lopped off by that line, suggesting a symbolic division between the social world, above the surface, and the realm of pure bodily sensation below.

The demarcation between public and private found in Emdur’s work is a feature of almost every swimming pool painting. In many cases the viewer is made into a voyeur, spying on a group of naked or near-naked bodies. Other artists emphasise the democratic aspects of a pool, as a place in which social distinctions – and cares – are abandoned along with the swimmers’ clothes. 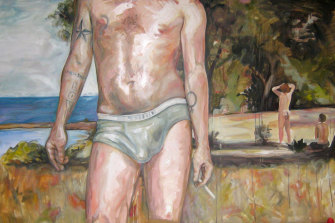 This idea was already current among the Australian Impressionists. In Tom Roberts’ The Sunny South (c. 1887), we watch from a distance as a group of boys go skinny-dipping at Ricketts Point, near Beaumaris. There are more bathers in Arthur Streeton’s Spring (1890) and Evening with Bathers (1888); and Charles Conder’s The Yarra, Heidelberg (1890). These classic Heidelberg School images conjure up hot, lazy days of summer, with swimmers cooling off in the Yarra.

One might trace such idylls of leisure even further back, to John Glover’s The Bath of Diana, Van Diemen’s Land (1837), in which tiny Aboriginal figures sit on the banks of a river or play in the water. It’s a work that now suggests lost innocence because the tribes were to be driven to the brink of extinction. Glover himself was only too conscious of “the gay, happy life the natives led before the White People came here”. Nowadays his painting of that happy life comes across as an elegy.

By the time Herbert Badham painted The Swimming Enclosure in 1941, Australia had become a very white society with a broadly democratic ethos. Gathered at Parsley Bay in Sydney’s Eastern Suburbs we see a lively crowd of people, many of them in bathing suits. United in their hedonism, we can’t tell whether they are rich or poor, bankers or beggars. It’s the polar opposite of a Victorian picture such as William Frith’s Derby Day (1856-58), in which every figure’s social status is denoted by their clothing and their bearing. Frith’s social panorama is ordered hierarchically but in Badham’s Swimming Enclosure every man or woman is as good as the next. 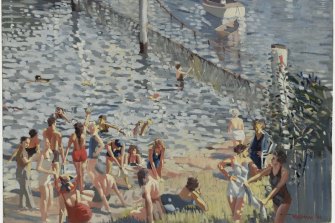 Among the most ambitious works of Australian swimming pool art must be Wendy Sharpe’s eight mural-sized paintings at the Cook & Philip Aquatic Centre in College Street, Sydney, that celebrate the life of swim champion and movie star Annette Kellermann (1886-1975). Known as “Australia’s mermaid”, Kellermann was one of our earliest international celebrities, with her prowess in the water being readily attributed to the free, healthy, athletic nature of her homeland. Sharpe portrays the highlights of Kellermann’s career in a series of colourful narrative paintings, although she doesn’t include the notorious pose from A Daughter of the Gods (1916), in which Kellermann became the first actress to appear nude in a Hollywood movie.

Most Australian images of swimming pools and ponds are saturated with casual joie de vivre, but there are some notable exceptions. Nigel Thomson, a habitual iconoclast, saw swimming pools as symbols of decadence and complacency. In one of his pictures a happy couple recline in the water, but the woman is holding a saw behind the man’s head. In a 1979-80 self-portrait he portrays himself underwater, with a shark peering over his shoulder. In Feeding Time (1980-81) a girl sits in a wheelchair at the bottom of a swimming pool, while a shark circles.

Perhaps the most chilling of Thomson’s macabre images is Mrs Cynthia St Lawrence Hopeton (1980-81), which features a golden-haired mother and child standing next to a palatial pool in which a man’s body floats amid a spreading plume of blood. This time the grotesquerie is muted but the humour is blacker and drier than ever. The image is borrowed from an iconic photo by Slim Aarons, rearranged to reflect Thomson’s personal feelings about the filthy rich.

The floating body in Thomson’s painting conjures up echoes of Jacques Deray’s classic movie, The Swimming Pool (1969), in which Maurice Ronet ends face down in the water. In the film the pool lies at the centre of a web of jealousy and sexual intrigue, a mixture utterly foreign to the casual, cheerful images that dominate Australian art.

There is, perhaps, a midway point between the local taste for simple pleasures and the bleak satire of Thomson in the paintings of Sydney bathers Jeffrey Smart produced in 1961-62, which are imbued with a sense of mystery and sexual tension. The most suggestive is Elizabeth Bay (1961), in which a naked woman partially concealed by a curtain is shown drying herself on a jetty, against the backdrop of a dark, stormy sky. She is being observed by a young man, just as naked, who stands with his back to us. 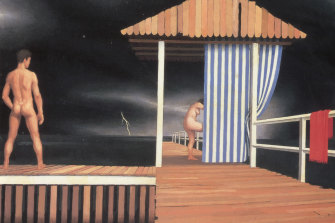 The gathering storm might signify the stormy feelings building in the young voyeur’s breast but Smart is never so obvious in his symbolism. It’s the enigma that appeals to him. We don’t have a clear idea what’s happening in this disjointed narrative but are invited to use our imaginations to decide whether the man and woman are a couple, or whether the watcher has some evil intent. Perhaps the main reason this work is so different from every other bathing scene in Australian art is the mass of dense black clouds that loom in the background. Take away the sun, the crowds and the seductive flicker of light on water, and even an Australian swimming pool can shift from pleasure to danger.