Home » Lifestyle » I’m a Scot who moved to London, and I can see why the Queen spends every summer in my home country

I’m a Scot who moved to London, and I can see why the Queen spends every summer in my home country 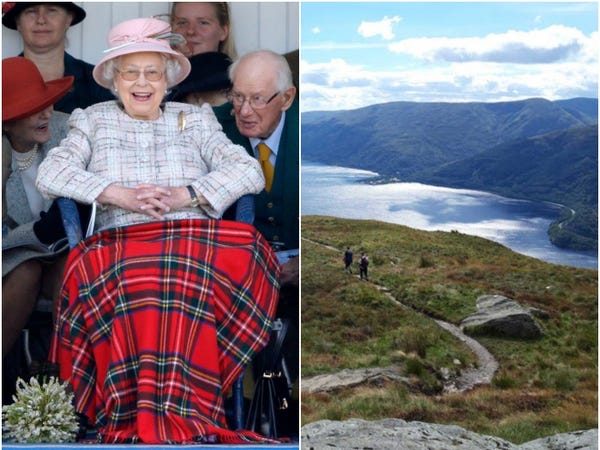 The royals have spent every summer there since 1852, when Queen Victoria and Prince Albert purchased the 50,000 acre estate in Aberdeenshire.

Surrounded by the scenic Cairngorms National Park and located 50 miles from the nearest city, Aberdeen, it's a stark contrast to the bustling Buckingham Palace.

As Queen Victoria reportedly once said, Balmoral makes "one forget the world and its sad turmoils."

The same can be said about Scotland as a whole.

This year, I got to spend my summer there, too — I decided to return from London, where I had been living for the past year, to my home city of Glasgow to quarantine with my family during the UK lockdown.

While I love London, as I'm sure the monarch does, returning to a country that's filled with gorgeous scenery, exciting history, and the friendliest people you can meet was the best decision I could have made.

Scotland is the ideal place to quarantine

There's no doubting that the Queen's vacation will have been different this year than in summers past.

Her Majesty didn't host the hundreds of staff that usually accompany her to Scotland, nor did she attend church or put on the annual Ghillies Ball, a traditional Scottish Ceilidh dance.

However, the monarch would have had plenty to do and see at Balmoral, where the scenery itself is worth a visit.

My own lockdown experience was spent walking, hiking, and enjoying the stunning views that you wouldn't find in the British capital.

In Scotland, you'll always have whimsical places to explore right on your doorstep. Despite living in the outskirts of the country's largest city, I have only ever been a short drive away from mountains like Ben Lomond (pictured above), lochs, waterfalls, national parks, farms, beaches, and woodland areas.

Here's a photo from my visit to the Isle of Skye's "fairy pools" in 2018, which was just as dreamy as it sounds.

The iconic waterfalls have a pretty fascinating backstory. One mythical legend has it that the chief of the Scottish clan MacLeod married a fairy princess, which is why many places on the island were named after the magical creatures.

While my family aren't quarantining in a castle, we can also still visit one whenever we feel like it.

If the Queen ever gets tired of Balmoral Castle or Holyrood Palace (her official residence in Edinburgh, Scotland's capital) there are hundreds of others she can try.

My personal favorite is Inveraray Castle, the ancestral home of the Duke of Argyll from the 1700s that was used for the Christmas episode of "Downtown Abbey" in 2012.

With its blue turrets and beautiful backdrop (it sits on the shore of Loch Fyne), the castle looks as if it was plucked straight out of a fairytale — and it's only a two-hour car drive from Glasgow.

Visitors from all over are attracted to Scotland for the traditions that set us apart from the rest of the UK.

For instance, a Ceilidh is a traditional Scottish dance which is usually set to bagpipe music, and the men wear kilts when they take part.

The video below shows the royal family taking part in Balmoral's annual Ceilidh:

Growing up, every Christmas we would have a mini "practice Ceilidh" at school instead of gym class until the end of the semester, when we would have the real thing — our version of a prom.

Scotland also has its traditional food, like haggis, which is made up of sheep heart, liver, and lungs. It's considered so gruesome that it's banned in the US.

Our rivers and countryside make it one of the best places in the UK for fresh produce. According to former royal chef Darren McGrady, the Queen often enjoys fish from the River Dee — known as one of the best salmon and trout rivers in the country — or game from the Balmoral grounds.

The people make Scotland one of the best places to be

In 2013, "People Make Glasgow" became my city's official slogan, but I think the saying goes for the entire country.

Unlike in London, where I knew none of my neighbors, at my family's home in Glasgow I know just about everyone.

Strangers have no issue starting conversation with each other, and small talk is pretty common. It's not unusual to have someone stop you mid-walk to strike up a conversation about the weather — or in recent times, the latest lockdown restrictions.

I'm not saying the Queen makes small talk with her neighbors at Balmoral, but I do believe the friendly people in Scotland make it one of the best places to be.

In Her Majesty's case, perhaps this means making more time for her family, like I did. After all, Prince William, Kate Middleton, and their children reportedly paid a visit to the castle this year.

Despite the unfortunate circumstances, spending the summer with my own family has felt like a blessing — especially after spending most of the year apart.

While my new life in Glasgow is undoubtedly worlds away from what the monarch has experienced, I'm sure the same things drew us both back to Scotland this summer.