Home » Lifestyle » ‘If it’s successful or not doesn’t matter that much’: Courtney Barnett’s new album

‘If it’s successful or not doesn’t matter that much’: Courtney Barnett’s new album

Courtney Barnett sometimes likes to take Polaroids of the people who matter to her. The singer-songwriter values the intimacy created by the boxy vintage camera – you have to be no more than a metre or two from your subject to capture their image on the vivid, shallow-focused film print. It happens, in every sense of the phrase, within touching distance. 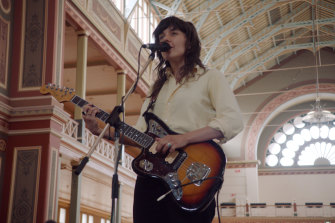 Courtney Barnett performing at the Royal Exhibition Buildings in MelbourneCredit:

“It sparks a memory and that’s a very magical thing about photos,” Barnett says. “Polaroids especially are this very small moment in time, and when you look back at them, you can remember everything.”

On the first day of spring, with her captivating new album Things Take Time, Take Time finished and ready for release, Barnett was working from her apartment in the Melbourne suburb of Collingwood, thinking about odd jobs that needed ticking off. She’d realised that her filing system for the many Polaroids she’d accumulated was inadequate: throwing the photos in “a beer carton-sized box” for years was neither organised nor accessible.

“I want to scan and catalogue them,” explains the 34-year-old singer-songwriter, keeping her laptop steady so that I don’t get nauseous on our video call as she navigates her kitchen to make herself a peppermint tea. Barnett is the most unassuming of interview subjects: dedicated to her art but not the elevation of it. Advance an involved theory about her work and she will allow a polite “maybe” before paring down the concept with her answer.

In 2014, when her career was taking off at a vertiginous pace and she was just back from an American tour where she’d played her breakthrough single Avant Gardener on The Tonight Show with Jimmy Fallon as four million Americans watched, I first interviewed Barnett at an inner-city Melbourne vegetarian restaurant. “I don’t feel I know everything – or maybe anything – about myself,” she calmly noted, sanguine about success and wary of certainty.

“The idea that we’ll know everything about ourselves is too high of an expectation. To be in that constant state of being open and ready to learn is probably the most important thing whether you’re 26 or 46,” Barnett says now. “When I get angry or frustrated or sad, I want to be aware of my reactions to things and then question them – and maybe consider a different approach the next time.”

Things Take Time, Take Time is a quietly radical next step for the acclaimed alternative-rock singer and guitarist. The 10 songs, notable for their hand-made textures and evocative detail, have an intimate, sustained mood. Begun before lockdown and finished during, the lyrics aren’t so much era-specific as deeply attuned to their creator. There’s a degree of hope, even generosity; the break-up song Before You Gotta Go unfolds not from anger but care.

“I wanted [the album] to reflect more simple songs. I was trying to take my time and write things in a more calm and reflective way, which was the kind of mood that I was chasing,” Barnett says. “In the middle of last year, looking ahead to the world seemed hard to do; it was overwhelming. Everyone had their own version of how they coped and mine in a way was writing and working on music.”

Barnett had come back to Melbourne in March 2020. She was worn out by two years of touring her second album, 2018’s Tell Me How You Really Feel, which had been released in the midst of her long-term relationship with fellow singer-songwriter Jen Cloher ending. Known for songs studded with household satisfaction, Barnett returned without anywhere to live. She took over a friend’s lease and lived alone for the first time in her life: to fill the silence, she started singing to herself, songs about chores and domestic appliances.

One new track, the hips-friendly Take it Day by Day, began the same way, a self-mocking composition about the friends on weekly Tuesday night video conference call who would urge her to stay positive. “Don’t stick that knife in the toaster,” jokes Barnett, “baby, life is like a rollercoaster”. Small moments, minor consolations have a resonance bestowed on them across the album, creating a lived-in quality that is genuinely affecting.

“I was writing a lot and there was too much to focus on. It was a constant reminder that less is more,” Barnett says. “In those moments, I was examining what was the one word or the one phrase that was important among everything, and focusing on that and focusing on what propels it, and how it feels and how it tastes and how it looks.”

Barnett has only realised in hindsight that the recurring themes on Things Take Time, Take Time are time and distance. There are pauses and unseen gaps that allow too long for reflections, messages are left in these songs and there’s a nervous wait for replies. It reaches a peak on the jangle and harmonies of If I Don’t Hear from You Tonight, a paean to a relationship starting – Barnett possibly no longer lives alone – where you want to cheer on the fingers-crossed protagonist hoping for a positive response from a crush.

“Our minds go to the worst places when we do the thinking for someone else. We make up the worst stories and assumptions,” Barnett says. “It can be debilitating if you look at things in regret, but it’s good to be aware of it without letting it rule your life. It’s good not to think too much in the past or the future.”

When Barnett talks about recording Things Take Time, Take Time she nearly always speaks of “we”, grouping herself with her co-producer, fellow arranger and linchpin instrumentalist Stella Mozgawa. The Sydney expatriate, who drums with Los Angeles indie band Warpaint, was essential to Barnett, who’d encountered Mozgawa on the music festival circuit and then befriended her when Mozgawa played drums and toured on the 2017 collaborative album Barnett made with their mutual friend, American singer-songwriter Kurt Vile.

‘You have to find what works for you, and I’m lucky my life and career revolves around music.’

As the songwriting for this album took shape, Barnett started to think about producers and studios. She would seek Mozgawa’s advice, sending her demo recordings for feedback and soliciting information on using various drum machines in her home recording set-up. Barnett admits that “maybe subconsciously” she was trying to coax Mozgawa into offering her services, although she readily admits that reaching out to people isn’t always easy for her.

“There’s this part of me – which I don’t like – which thinks that people would never want to work with me when they could be doing all these other things,” Barnett says. “It’s very negative and I don’t like it, but I was thinking that, ‘what if I ask her and she says no?’”

Cutting a cover for a Sharon Van Etten tribute album let Barnett and Mozgawa break the ice, and it went so well that last December they spent five days in a Sydney recording studio starting the album. For Barnett, there was less certainty and more idea swapping: the pair took turns playing bass and if they didn’t like a recording, they’d “start again and flip it inside out”. When they felt the first pass at the closing track, Oh the Night, didn’t stand out, they re-recorded it with Barnett playing drums and Mozgawa on piano.

“You experiment with different things and see what works best with the song. On Here’s the Thing, I got a cello bow and played my guitar with it so it’s like this string section,” Barnett says. “Even within that there’s this weird sound that’s more like a brass section than the tone the bow picked up. It’s such a beautiful thing.”

While Barnett and Mozgawa were in Sydney, the border with Victoria closed, so they stayed in NSW for several months, recording vocals in cupboards and living rooms. Barnett, who grew up in Mona Vale on Sydney’s northern beaches, was able to visit her brother and his family. They drove past their childhood family home, visited the Ku-ring-gai Chase national park and swam in the ocean. 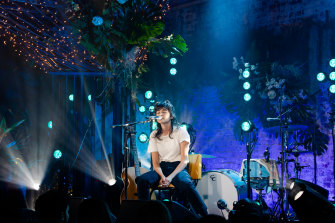 “It felt nostalgic in a family holiday kind of way,” says Barnett, the younger of two children to a ballerina mother and graphic designer father. The Sydney summer even included a few sets of tennis, a sport the musician played competitively as a teenager complete with an on-court temper she has mockingly insisted she inherited from her father. An admirer of Australian tennis ace Ash Barty, Barnett now plays purely for fun. Off the court, her outlook is driven by trying to recognise the positive.

“I definitely get frustrated a lot, when you read certain things and see people being selfish or extremely entitled, and that is obviously frustrating to everyone,” Barnett says. “But it’s good to remember that there are a lot of good people doing good things – even just the people in science and health working hard to sort shit out regardless of the people questioning them.”

After several years punctuated with trying times, Barnett believes she’s mostly in a good place: “getting there – it’s an ongoing process,” is her clipped verdict. She’s currently in America, where the touring circuit is up and running, with a sizeable North American tour running from the end of this month to the middle of February. Europe and Australia will follow in 2022 as the world hears Things Take Time, Take Time, a bespoke album that contains Courtney Barnett’s entire world.

“It’s a strange time to release an album, but it seemed like the right time for the songs to exist out there. If it’s successful or not doesn’t matter that much. Hanging onto the songs for any longer doesn’t do them justice,” Barnett says. “You have to find what works for you, and I’m lucky my life and career revolves around music. Just write what you want to write and don’t worry about how it will make its way into the world.”

The best of Good Weekend delivered to your inbox every Saturday morning. Sign up here.