Home » Lifestyle » I was told ‘they don’t hire people that look like you’: Michelle Lim Davidson

I was told ‘they don’t hire people that look like you’: Michelle Lim Davidson 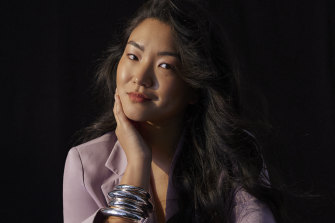 Michelle is the first Korean-Australian to lead an Australian television show.Credit:Jedd Cooney

Back in 2010, when Michelle Lim Davidson was about to graduate from the Western Australian Academy of Performing Arts (WAAPA), she was handed advice that no aspiring actor wants to hear. “Agents and industry people came directly up to me and said, ‘I just want to let you know, you’re very good. You have talent. But you will never work,’ ” she recalls. “They were like, ‘You’ll never work on television, and it’s going to be really hard for you to get a job in main-stage theatre. They don’t hire people that look like you.’ ”

Michelle, who was born in Korea but raised in Australia, was left reeling and racked with self-doubt. “I asked myself, ‘What am I going to do? Why am I even here?’ I just didn’t realise it would be such a problem.”

But only a couple of days after her WAAPA graduation showcase, she proved her doubters wrong. In the audience of that showcase was British comedian Ben Elton, who selected Michelle to be part of his 2011 TV sketch comedy show, Ben Elton Live from Planet Earth.

The show would last only three episodes but it was enough to launch Michelle’s career. Since then she has starred in television shows such as Utopia, Doctor Doctor, Harrow, Get Krack!n, Top of the Lake China Girl, The Secret She Keeps and The Newsreader, for which she was nominated for an AACTA for Best Supporting Actress in a Television Drama. 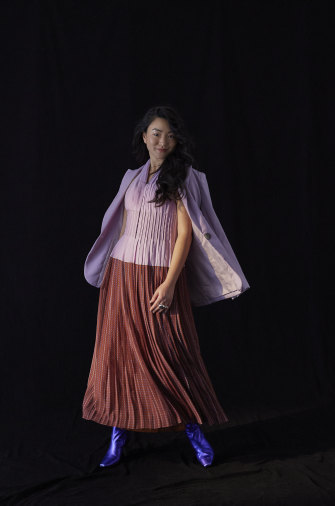 Michelle’s film credits include Ivan Sen’s Goldstone and she has a huge list of theatre productions to her name. But for anyone with a preschooler in the house, Michelle is probably best known as a regular presenter on Play School, a role she’s held for the past 10 years.

In real life, Michelle looks much younger than her 34 years, and she admits she still gets asked for ID at her local bottle shop. As someone who spends her time in front of the camera, she is surprisingly apprehensive about today’s photo shoot.

“The first thing I said to everyone this morning was, ‘I’m really nervous. When I say I’m nervous, I’m actually terrified,’ ” she says, laughing and hiding her face with her hands.

It’s her latest role, in Channel 9’s upcoming drama After the Verdict, that brings her into the Sunday Life photo studio. The series is a murder mystery with a comedic twist about four people who meet while serving jury duty – Clara (Michelle), Daniel (Sullivan Stapleton), Margie (Magda Szubanski) and Ollie (Lincoln Younes). When the case is over, the four jurors start having second thoughts about the woman they’ve declared “not guilty” and go about investigating the murder for which she’d been accused. 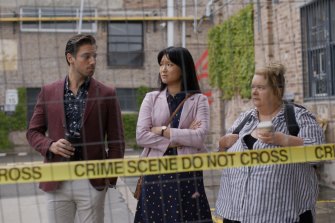 “One of the things I love about the show is that we’re all quite different: Magda, Lincoln and Sullivan and me,” says Michelle. “So the relationship the characters form is a very unlikely bond.”

Michelle describes her character, Clara, as “quirky”. “She has absolutely no life skills that align with being like a private detective, but she’s on this mission to get justice for the victim. So they end up on this extreme journey. Clara is maybe a bit similar to me; she can’t back out.”

There’s something else that makes the role of Clara particularly significant. This is the first time a Korean-Australian character has led an Australian television show. “I could not have anticipated that my journey would bring me here. Everyone said it wouldn’t happen,” says Michelle.

But the path to this point hasn’t been without bumps along the way. Michelle recalls once being asked to fill out her details on a form at a casting agency and under the category of Asian ethnicity there were specific options such as Chinese and Japanese, but there was no box to tick for Korean. “I remember saying, ‘I’m Korean,’ ” says Michelle. “The agent just looked at me and said, ‘Oh, you could pass as any of them.’ ”

“I remember saying, ‘I’m Korean.’ The agent just looked at me and said, ‘Oh, you could pass as any of them.’ ”

Michelle doubts many other actors have been asked to end their audition scene with an unscripted karate kick, or been asked if they speak Mandarin. “I said, ‘I can’t speak Mandarin.’ And they said, ‘What about Cantonese?’ ”

It was Michelle’s role as Noelene Kim on The Newsreader where she first played a Korean woman on Australian television. Even then, the role was adapted for her. “I auditioned and I said, ‘You know, I’m Korean … I’m not sure if that’s going to fit in the show.’ But they were very open to it. So I had never even auditioned for a Korean woman.” 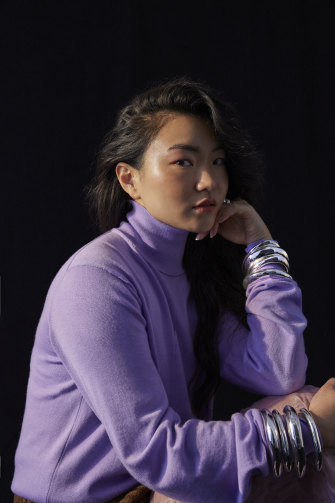 Michelle was four-and-a-half months old when she was adopted by her Australian parents, who live in Newcastle. She speaks of feeling like an outsider growing up in the harbour city.

“I was the only Asian person at my school until year 4,” she says. “I never felt like I fit into the beach culture. I was not good at sports.”

Michelle says her parents joke that she didn’t see the sun for the first 12 years of her life because she was so shy. But she found her personal expression through the arts and took up dancing, where her shyness would evaporate once she was on stage.

Michelle’s parents also enrolled her into drama lessons in an attempt to bring her out of her shell. She says a switch flicked when she started year 7 at a performing arts high school. Soon she was performing in high school musicals and community theatre, and slowly merged from dancing to acting.

After finishing school, Michelle worked as a “sandwich artist” at Subway, while applying year after year to gain entry into WAAPA. It took three attempts. The move to Perth would prove to be life-changing.

But there was another important journey Michelle would take. It took many years before she felt ready to return to the country of her birth, but she eventually reconnected with her family in Korea. “It’s a surreal experience. I’ve never really felt like I fit in here. I also don’t really fit in there.

“It’s the best and worst thing I’ve done in my life. It’s not what you think it’s going to be. It’s not all Disney. It’s a very unique and special connection; I felt it spiritually. I relate to my father’s home town and just feel connected to a place, to land, that I can’t explain. But there’s so much loss on either side, and I’ve lost so much time. So I just feel like I’m kind of catching up.” 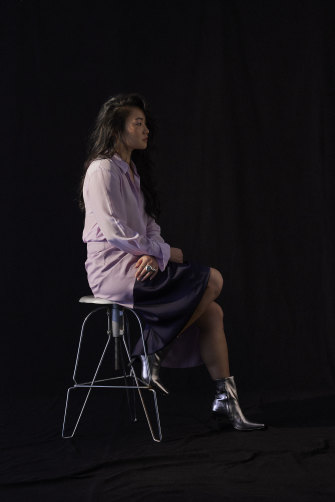 Michelle beautifully expresses the sense of feeling caught between two worlds and not quite belonging to either. “It was when I was flying home and looking at the map of the plane’s journey on the screen in front of me. The plane was midway across the ocean, the halfway point, and I thought maybe that’s where I am.”

“The plane was midway across the ocean, the halfway point, and I thought maybe that’s where I am.”

Her experience inspired her to write a play which is titled, Where We Love
Is Home. “It’s ultimately about finding home within you. I feel like I carry my home. I’ve made that world for myself. It’s so freeing for me. I was no longer trying to fit in anymore. I just felt like I could be me.” 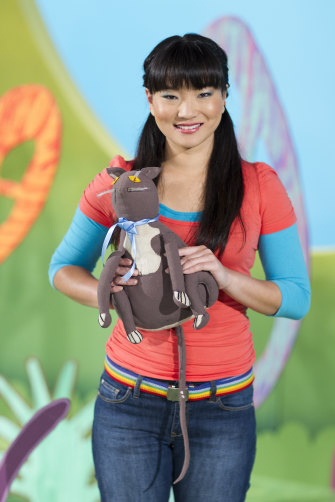 Michelle has been a regular presenter on Play School for the past 10 years: “You realise how important it is for little kids to see you.”Credit:ABC

Besides the upcoming release of After the Verdict, and developing projects for theatre and television, Michelle is busy preparing for filming the second season of The Newsreader. She has also just wrapped a 90th anniversary special for the ABC, and it’s her role on Play School that brings her a special kind of joy.

“When you get out and you meet the kids who are watching, it’s really enjoyable,” she says. “Back to that diversity, you realise how important it is for little kids to see you.

“I remember, a mum told me this story about how her daughter was screaming from the living room. The mum rushed in thinking something was wrong. The girl was pointing to the television saying, ‘This girl looks like me. She has the same eyes.’ The girl asked her mother, ‘One day, can I be like Michelle?’ And I got to say to that mum, ‘Yes, yes, she absolutely can.’ ”

After the Verdict will launch on Wednesday, August 10 at 8.45pm on Channel 9 and 9Now.