Home » Lifestyle » I Tried To Deliver Century-Old Mail To Its Rightful Owners. It Took Me 2 Years.

I Tried To Deliver Century-Old Mail To Its Rightful Owners. It Took Me 2 Years. Millions of pieces of mail make their way through the United States Postal Service each day and most are faithfully delivered. But sometimes mail can’t be delivered. Maybe it’s because there’s a mistake in the system. More often, the letter writer has the wrong address or terrible penmanship.

Undeliverable letters, or “dead letters,” are forwarded to an office where clerks take a closer look and try to direct them into the right hands. This process has been roughly the same since our national postal system was founded in 1775. But in my small town in Pennsylvania, back at the turn of the century, there was one mysterious postmaster who didn’t follow the rules.

Instead, for reasons still unknown, he kept some of those dead letters, which were discovered nearly a century later by my friend and “journalism buddy” Joan Swigart. In the mid-90s, Joan, always looking for a scoop, found 10 unopened missives in the old general store and post office, which had long been abandoned.

I was a few years into my career writing for small-town newspapers when Joan gave me the letters. Joan, at 87 years old, had retired and finally decided she wasn’t going to get around to doing any dead letter sleuthing, but she thought that I might be up for it.

I carefully opened the letters, which were dated between 1902 and 1910, and started to look for clues. One letter was written in tidy cursive by a 13-year-old girl, the daughter of a coal miner, who complained to her aunt about having a cranky teacher, Miss Sheffar. The girl confessed to having received at least one “licken” at the hand of Miss Sheffar, and then threw her older brother under the bus by revealing that he had gotten too many to count.

Another letter, addressed to Billy from West Grove, was written in a passionate, sprawling script by a former lover. Mary was a young nurse determined to make Billy insane with jealousy by talking about the doctor who told her that the only thing to “take the mischief” out of her would be marriage. She referred to what must have been a scandalous encounter with Billy, in which she was wearing “a black silk bathing suit.”

Several of the other letters surprised me, not because of their Victorian gossip or a casual reference to corporal punishment, but because they were in different languages — Italian, Hungarian and Yiddish. Where I live, and where the letters were found, is much like countless other rural lumber towns that aren’t exactly known for cultural diversity.

One letter, written in Italian and addressed to Antonio Ceccarelli, was from his father across the Atlantic. “Dear son, now I’m telling you that I would like in the month of May, 1906, to come and see you on this Earth if God will give us life,” he wrote, adding that “I hang on to the fantasy to come to your land.” It made me sad to think this letter went unanswered.

Perhaps the letter that affected me the most was written by a Hungarian woman named Mari Horvath. Actually, the letter was scribed by her husband, Janos, but it was clearly Mari’s voice as she expressed to her sister how hard it was to run a boarding house in America. Her sister had just recently emigrated with her husband and they had started their own boarding house. Mari also commented on the picture that her sister sent and didn’t hold back on her opinion. “Potatoes in the old country did you better than the beer here,” she wrote.

I liked Mari’s sense of humor, which endured despite what must have been a grueling life. When I found out more about her by researching her census records and obituary, I discovered that her life seemed to have been nothing but hardship. Around 1905, she was employed at the New Jersey Worsted Spinning Co., a brutal working place.

I read accounts of what happened at this textile mill and others like it and everything the workers had to contend with, including the deafening shriek of machinery, stagnant air, and open troughs provided for toilets. Disease was rampant. In fact, the conditions at these mills were so horrific that they led to one of the most bitter strikes in the history of the American labor movement. When I learned that Mari died in her 60s, still working for the same mill, I couldn’t help but mourn her, a woman I never met who died decades before I was born. 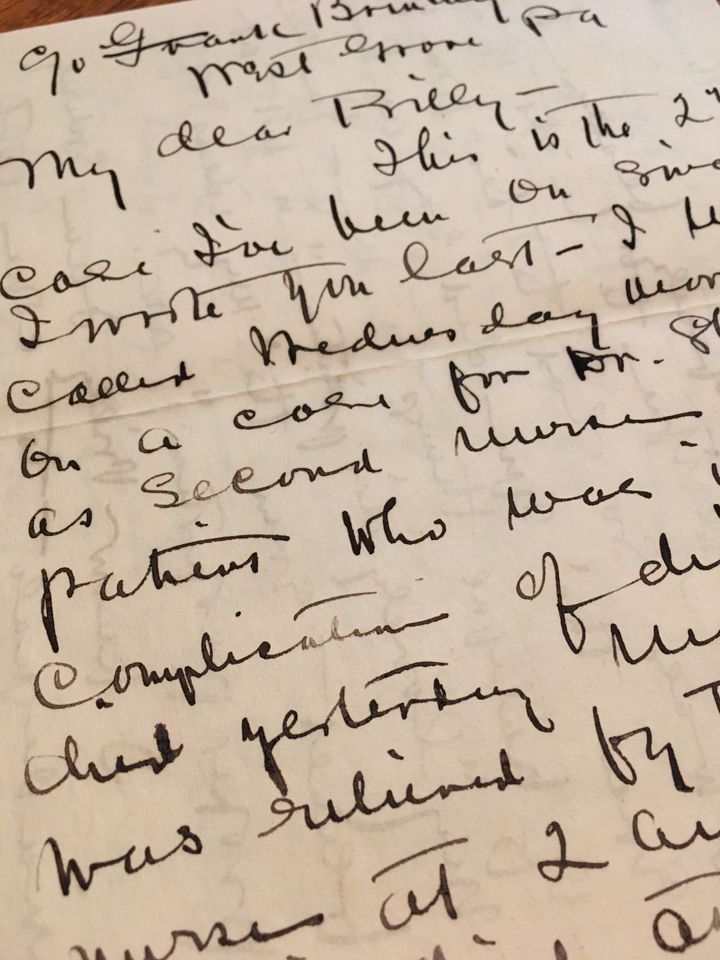 Joan had always wanted to track down the descendants and deliver an ancestor’s lost mail to them — so that’s exactly what I did. I never found a descendant of Mari Horvath, but I did manage to deliver seven of the other letters by using online resources like ancestry.com or newspapers.com that led me to obituaries that listed family members. I also had the help of a few local historians and Facebook groups that pointed me in the right direction. It seemed everyone was eager to see these letters finally get to the right places.

All of the descendants I found were genuinely shocked to receive this intimate artifact from their family’s history. Some remembered stories about their ancestors and were thrilled to make this new connection. One man I talked with could trace his ancestors to the early settlement of Taunton, Massachusetts.

For others, the letter I provided was the only clue they had to their family history, including the one written in Yiddish. My research on that letter uncovered the saga of four brothers who emigrated from Eastern Europe and experienced both the wide-eyed possibilities and crippling tragedies of life in America.

When, after two years of research, I finished my dead letter assignment, I returned to Joan and told her about all of the stories I had uncovered. She was delighted, especially when she saw the letters addressed to her that I had asked the descendants to write.

I thought about how there used to be millions of personal letters, fluttering back and forth like fragile lifelines, spanning continents and connecting people in a way that can’t be replicated by modern email, text or TikTok. The dead letter experience made me ― a typical millennial who has one foot in the world before email or texting or social media ― think of all of the letters I had written in my life. Letters that, despite my ever-growing email inbox, I still write when I want to express sincere emotion or am searching for some kind of physical connection despite the distance between me and my loved ones.

Across our history, the U.S. Postal Service has endured. In the face of a global pandemic, this American institution has responded to our nation’s collective need to stay connected by providing us with an opportunity to share what can’t be replicated online.

I was eventually able to deliver those letters from the past, though far too late to fulfill their original purpose. Messages like the one to Antonio Ceccarelli from his father were a somber reminder of how important it is that our mail reaches its destination on time so that we don’t have to live with nagging “what-ifs” or regret. Still, I was glad to know those letters finally reached someone who would treasure them.

Sometimes a simple piece of mail isn’t all that simple ― and it can mean everything.

Jess Weible is a freelance reporter and author of “Dead Letters: Delivering Unopened Mail from a Pennsylvania Ghost Town.” She is also a founding editor for The Watershed Journal, an inclusive, regional literary magazine for the western Pennsylvania Wilds. Weible leads two writing groups, the Writer’s Block Party and the Rebecca M. Arthur’s Young Writers. She lives with her husband and two boys in Brookville, Pennsylvania. Visit jessweibleauthor.com for more.

Do you have a compelling personal story you’d like to see published on HuffPost? Find out what we’re looking for here and send us a pitch!