How the most expensive Indian movie ever made conquered the world 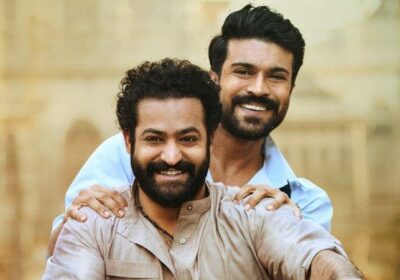 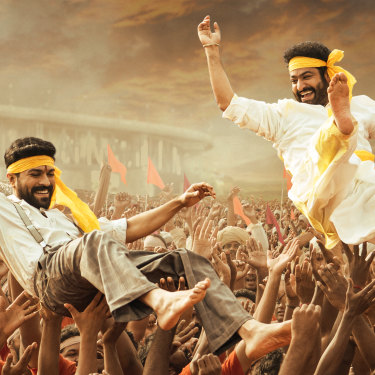 RRR’s spectacular action and bold visual effects have made it a huge hit, even with those who may not pick up on its heady mix of history, religion, myth and nationalism.Credit:Netflix

If you’re among the many millions who have helped make RRR a box office hit, as well as the biggest Indian movie ever on Netflix, you’ve probably marvelled at its insane special effects, staggering action set pieces featuring hundreds of real (not CGI) extras, and mad storytelling that morphs from historical epic to religious allegory to superhero movie without missing a beat, all while it finds room for some of the most over-the-top song-and-dance numbers ever committed to film.

If you’re a non-Indian viewer you might be only dimly aware of the heady mix of politics, myth and Hindu nationalism that drive it. Yet these are the very things, some experts say, that have helped make RRR – which stands for Rise! Roar! Revolt! – such a hit.

What is RRR, how big a hit is it, and what’s it really all about?
First, the basics. RRR is a three-hour-plus historical drama set in the 1920s that tells the story of two real heroes of the Indian independence movement, Komaram Bheem (N.T. Rama Rao Jr), an Indigenous tribal leader, and Alluri Sitarama Raju (Ram Charan), a guerilla leader. Both Bheem and Ram, as they are known in the film, are highly fictionalised versions of these historical figures, with the latter waging his campaign from within the British military (which never happened). 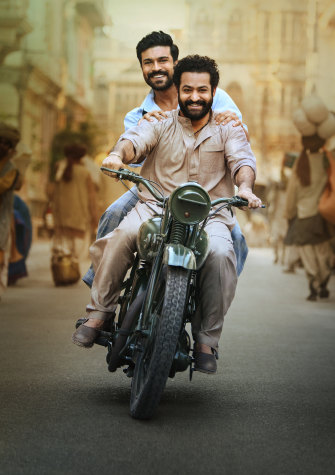 Ram Charan, rear, as Rama Raju and N.T. Rama Rao Jr as Komaram Bheem in RRR. The film has been a roaring success, in India and abroad.Credit:Netflix

The film is directed by S.S. Rajamouli, one of India’s most successful filmmakers, and with a budget of around 5.5 billion rupees ($102 million) is the most expensive Indian movie ever made.

It has incredible stunts, insane CGI sequences (an attack on a British stronghold featuring a truckload of wild animals, including tigers and wolves, is the absolute standout), and over-the-top musical numbers. It is bonkers.

It’s a Bollywood movie, right?
Not quite. The movie was made in the Telugu language spoken in southern India. Bollywood films are primarily made in Hindi. The south Indian industry, which also makes movies in Tamil and Malayalam, is colloquially known as Tollywood, and turns out around 300 features a year, about a quarter as many as Bollywood.

How big a hit is RRR?
In India, where the average ticket price is about 100 rupees ($1.85), the film has taken more than 10 billion rupees ($185 million). That suggests around 100 million Indians have seen it in cinemas.

In the US, it made $US14 million ($20 million) playing to mostly Indian audiences in March before getting a second-wave release in arthouse cinemas earlier this month where, according to Deadline, “some 90-95 per cent of the audience has been non-Indian”.

In Australia, the film opened on 209 screens – a number typically reserved for mid-market Hollywood films – in the last week of March, taking more than $2.4 million in its opening weekend, more than every other title bar The Batman. It finally grossed a whisker under $3.6 million, making it one of the biggest box office hauls ever for an Indian film locally.

On May 20, the film debuted on Netflix in 15 different subtitled languages at number seven globally. For the next three weeks it was number one. In its first four weeks on the streamer it was “viewed for 45 million hours across the world”, a spokesman for the company says. It has been in the top 10 in 62 countries including the US, Brazil, UK, Kenya, Italy, Australia and New Zealand.

Why has it been such a hit?
According to Sydney-based producer-director Anupam Sharma, the movie has struck a chord with Indians at home and abroad because it features the big stars that Indians literally worship – “there are fans who have built temples for their stars, and there are public holidays for some star films’ release days” – and massive spectacle.

Sharma also points to the “non-controversial” enemy, which sets RRR apart from the recent wave of Hindu nationalist-leaning cinema in which Muslims are depicted as the objectionable Other. “In the current nationalistic climate where anything against authorities is considered anti-national, making Britishers the villains is perfect,” he says.

What about the subtext?
While the movie “isn’t as virulently Islamophobic” as other recent Indian films, says Chennai-based writer Karthik Shankar, “it’s notable that in the opening scene where Ram is fighting a large mob, the crowd seems to be made up of Muslims and Sikhs”.

By the end of the film, Ram has effectively been transformed into the Hindu god Rama, while Bheem is cast more or less as the monkey god Hanuman, and incorporated into the Hindutva (Hindu nationalist) cause represented in a musical finale that pays tribute to Hindu heroes of the revolution while omitting pan-Indian figures such as Gandhi and Nehru. 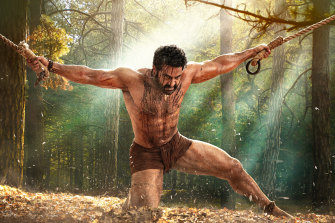 Shankar observes that the movie’s “nationalist sentiment” comes into focus here, by “merging together disparate groups” including those, such as Bheem’s Indigenous Gond, “that have been antagonised and oppressed by the Indian state into a unified Indian identity”. The realities of caste are obliterated too, as the untouchable Bheem happily accepts his subservient status to the Kshatriya (higher caste) Ram.

What about the love story?
RRR features a romance of sorts between Ram and Sita (Alia Bhatt), a woman from his village who is also secretly involved in the resistance to the British. Their relationship has a historic basis as well as an echo in religious myth, but the real romance in RRR appears to be between Ram and Bheem.

The pair first lock eyes and clasp hands in a daring rescue of a boy in a burning river, while dangling from a rope draped over either side of a bridge (yes, it’s as mad as it sounds). The sensuality of that moment is topped by their dancing together, by scenes of them clinging to each other on a motorbike, and by Bheem lovingly tending Ram’s wounds in the forest.

There are echoes in all this of the classic brother-in-arms trope of Indian’s masala cinema, says Melbourne-based academic Vikrant Kishore, but “they are totally pining for each other. The emotional quotient of the love relationship is at the extreme end of homoeroticism.

“The heroes are so in love with each other that the heroine is totally sidelined,” Kishore adds. 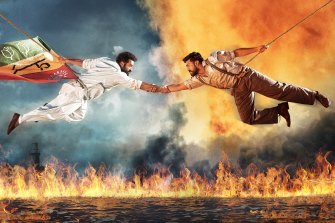 Hands across the water: Is the relationship between Ram and Bheem simply brothers in arms, or something more?Credit:Netflix

So, should I watch it?
Some of the acting is risible, the dialogue is corny, the exploits of the central characters unbelievable (the moment Bheem swings a motorcycle as if it were Thor’s hammer springs to mind). The action and special effects and dancing are utterly over the top, and some of the politics and coded messaging are dubious.

But put all that aside and you have one of the most exuberant and exhilarating pieces of filmmaking you could wish for.

“Most Indian filmmakers would say, ‘leave your brains at home when you come to watch a masala movie’,” says Kishore. “RRR is the perfect celebration of family, friendship, nationalism and the age-old fight for good against evil that scores high with audiences across the world. No wonder it is a blockbuster.”