Home » Lifestyle » How can I claim compensation if my flight is delayed or cancelled?

How can I claim compensation if my flight is delayed or cancelled? HUNDREDS of British Airways flight were cancelled after an IT glitch halted check-in and flight departures.

It comes after a quarter of all UK flights were disrupted by delays or cancellations last year. Here's what you need to do to get your money back. 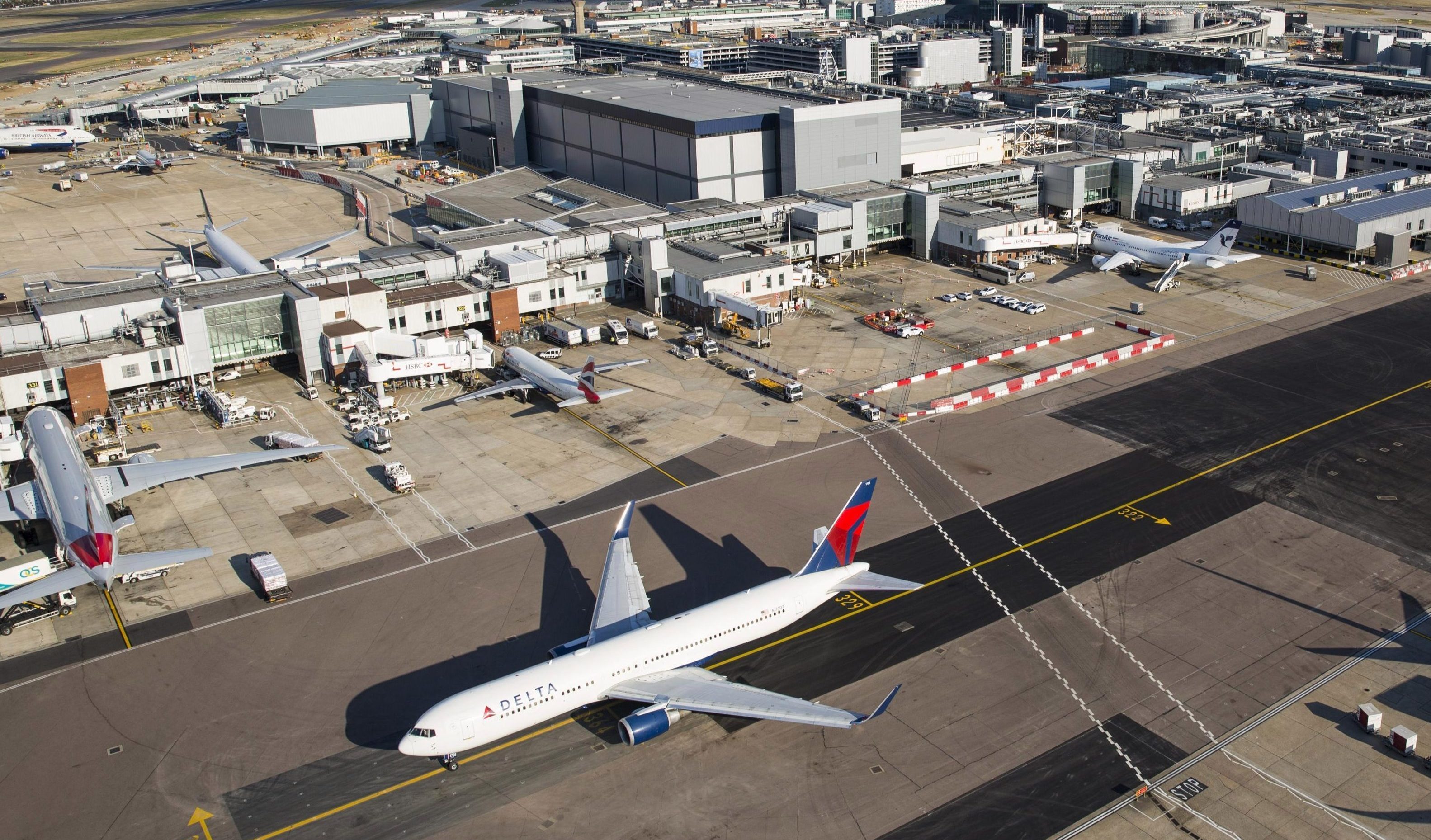 What are my rights if my flight is cancelled or delayed?

Passengers flying with an EU airline or a non-EU airline flying from a EU airport are protected by the Denied Boarding regulations.

This means that the airline must offer you the option of either being reimbursed for a cancelled flight or rerouted on either the next possible flight or on an agreed date.

It must also provide you with meals and phone calls and hotel accommodation and transfers if the rerouting involves an overnight stay.

If you opt for a full refund instead then the airline has to give you the money back for the part of the journey that wasn't made and any parts already made that are then useless.

You are also entitled to the earliest possible return flight.

You may also be able to get some money back if your flight is delayed by three hours or more and you were flying from or to a European airport, or with an EU-based airline such as Ryanair or British Airways.

In the case of strikes or computer glitches, like the one which affected BA passengers in 2017, you can claim compensation from the airline for cancellations and delays of more than three hours.

More than 60 flights were cancelled out of Heathrow on Friday and dozens more delayed after a malfunction hit Swanwick Air Traffic Control Centre. 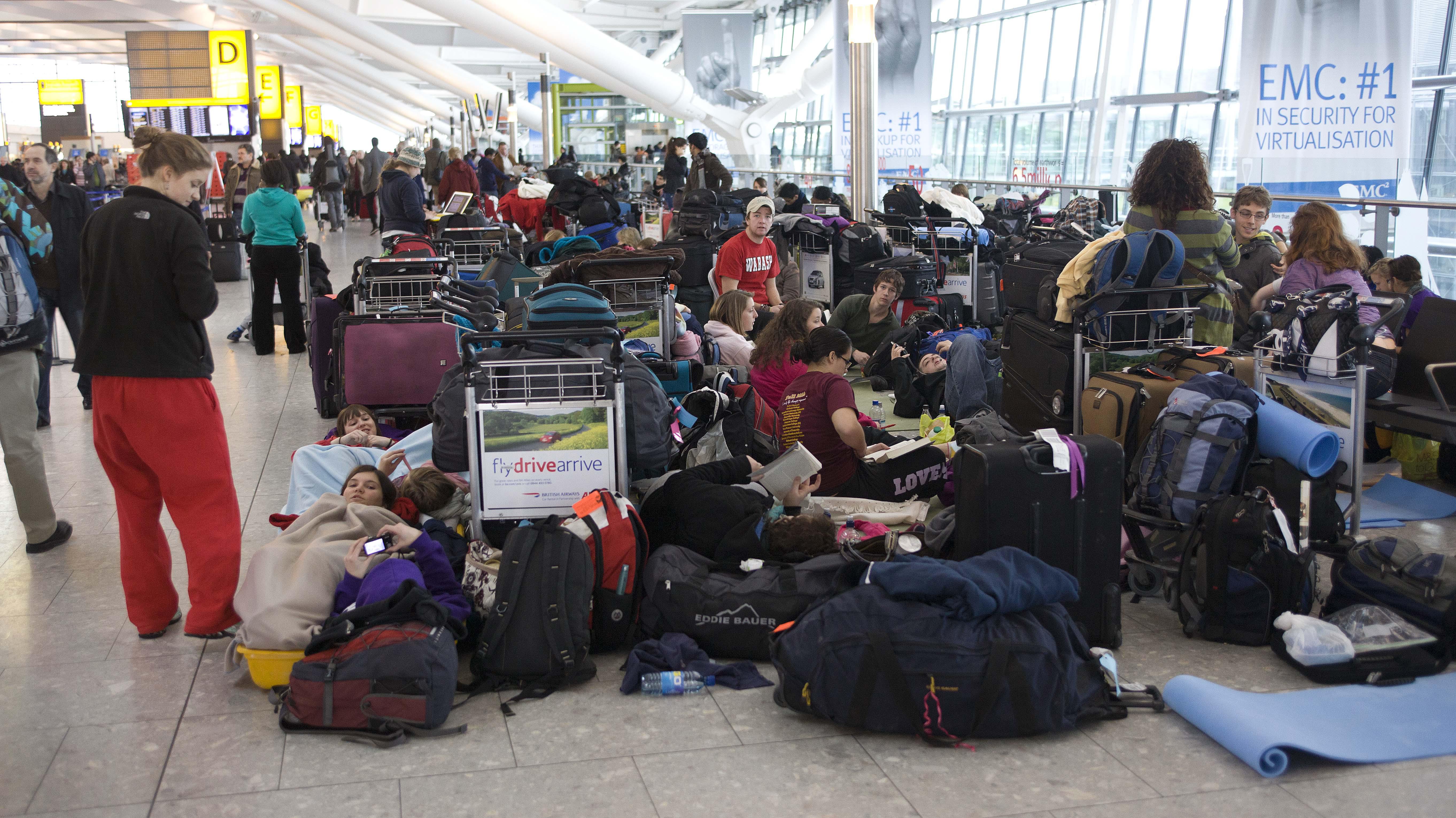 When am I not entitled to compensation?

The airline doesn't have to give you a refund if the flight was cancelled due to reasons beyond their control, such as extreme weather.

Some airlines may stretch the definition of the "extraordinary circumstances" but you can challenge them through the aviation regulator the Civil Aviation Authority (CAA).

For example, if you are told you can't fly due to weather conditions but other flights are departing then you may want to raise this with the airline.

It also doesn't have to pay back your cash if you're told about it at least two weeks in advance, or if it's cancelled and rerouted between one and two weeks of the day you're supposed to leave and gets you to your destination no more than four hours late.

You won't be able to claim compensation for flights cancelled and then rerouted that get you to your destination no more than two hours later than planned. 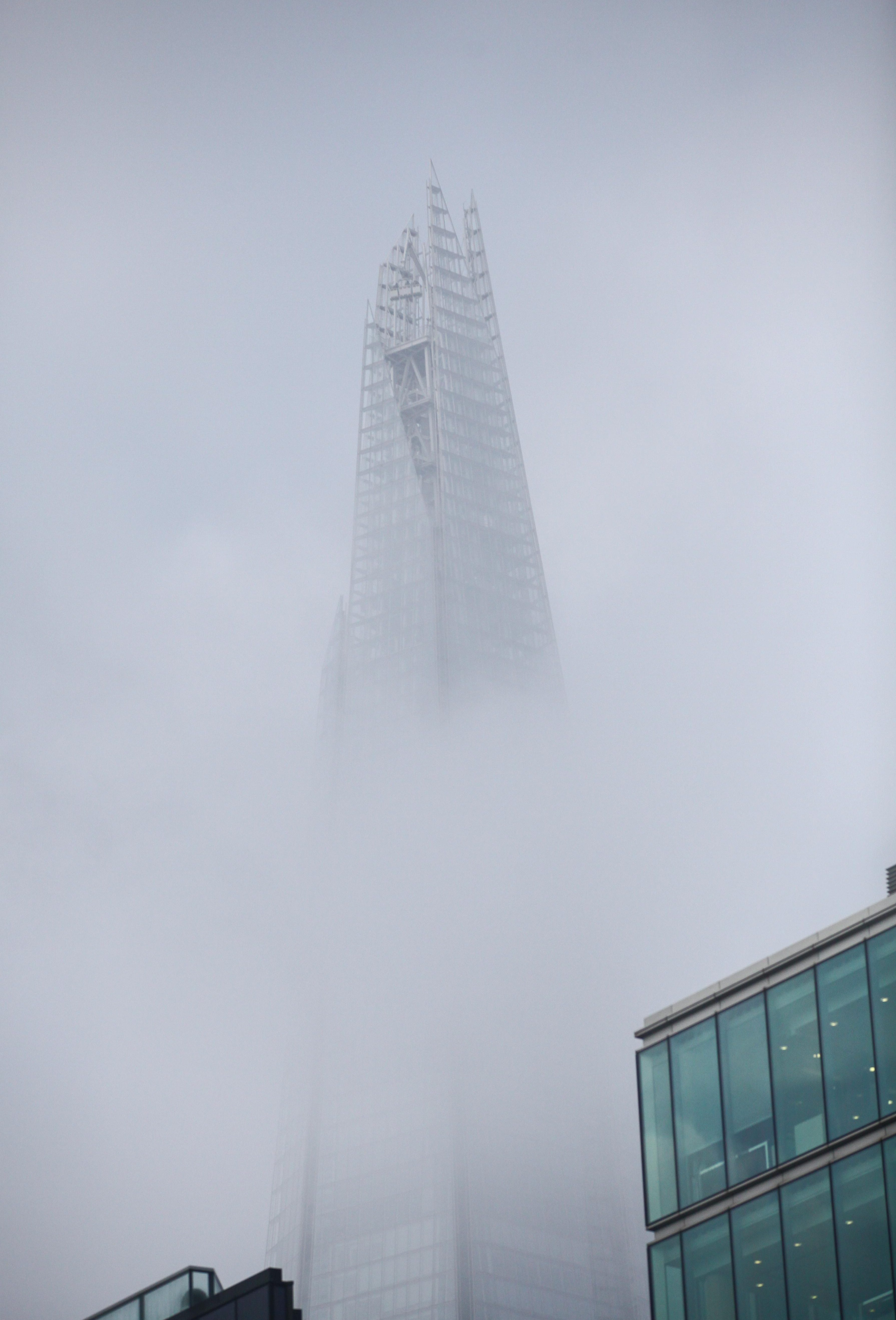 Can I get compensation if the airline has gone bust?

Earlier this year Flybmi announced it was going into administration.

Your rights depend on whether or not you booked your flights through a site that is Atol protected.

Atol protection means that you're guaranteed a refund if a company goes into administration and an alternative route home will be found for you.

Your booking will be Atol protrected if you booked ta package holiday through a travel agent, booked flights directly through the airline.

If you booked through another company that isn't protected and paid with a credit card you may be able to claim through your provider under the section 75 of the Consumer Credit Act.

If this doesn't work then you’ll have to join the list of creditors who are owed cash and you're unlikely to get your money back. 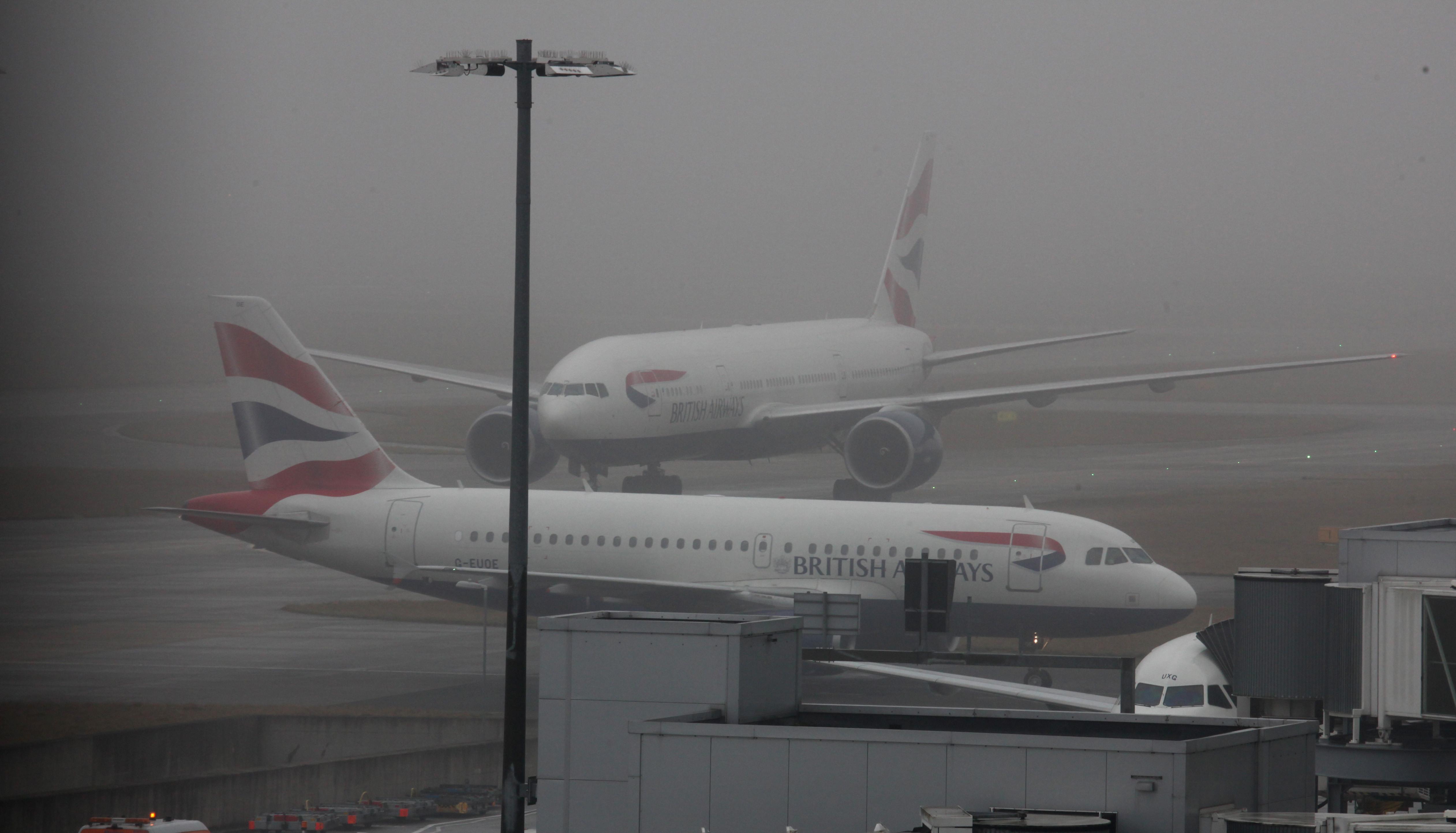 Can I get a refund if my connecting flight is cancelled?

EU rules mean passengers caught up in delays on a connecting flight outside the UK can now claim compensation of up to £530 – but the rules are complicated.

Before, you could only apply for a payout if your flight was leaving an EU country or you were flying with an EU-based airline, and it was delayed by more than three hours.

So if you were flying from London to Sydney with a stop off in Dubai, and the second flight was delayed or you're stopped from boarding, you couldn't claim any money back.

This is because the second flight isn't leaving from the EU.

But under the new rules, you'll be able to claim a payout because you checked-in at an EU airport. 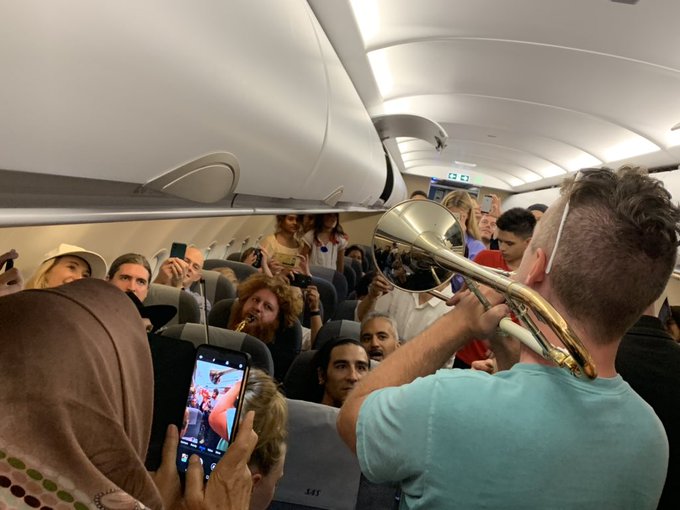 In August 2019, British Airways flights were cancelled with delays around the world affecting thousands, after an IT glitch halted check-in and flight departures.

Almost 300 flights were cancelled or delayed at Heathrow and Gatwick airports alone as holidaymakers had their plans thrown into chaos.

More than 200 other flights were delayed, with some more than five hours behind schedule.

It's just another problem to hit the flag carrier airline of the UK – having this year faced a multi-million pound fine over a hack of their customer's data, the threat of pilot strikes and baggage mayhem.

It's the third major IT outage for BA in two years after 672 flights were cancelled with 75,000 people affected over a May Bank holiday in 2017 and another glitch in July last year. 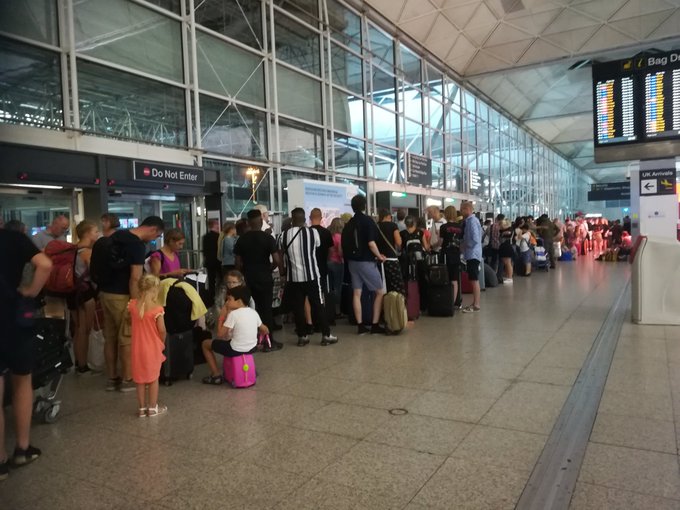 Will my insurance cover me if my flight is cancelled?

If you can't claim compensation directly through the airline, your travel insurance may refund you.

According to comparison site MoneySuperMarket.com, if you’re delayed at a snowbound airport then a standard travel insurance policy would usually cover you.

Policies vary so you should check the small print, but a delay of eight to 12 hours will normally mean you qualify for some money from your insurer.

Remember to get written confirmation of your delay from the airport as your insurer will need proof.

If your flight is cancelled entirely, you're unlikely to be covered by your insurance.

How can I find out if my flight is delayed or cancelled?

In unusual conditions you are advised to check the status of the flight with the relevant airline before setting off for the airport.

You can also check today's live departures boards for Heathrow, Gatwick and London City airports by following these links.

Earlier this year, Heathrow Airport were forced to cancel around 100 flights because of severe weather warnings.