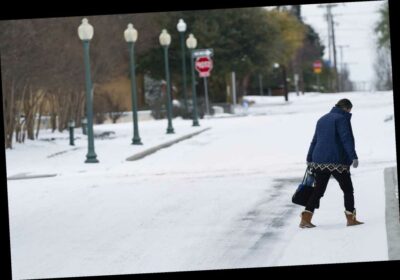 Houston has ordered millions of residents to use boiled or bottled water as the city's water pressure plummeted dangerously low from winter storms sweeping across Texas.

On Wednesday, city officials issued a boil water notice for Houston's main water distribution system, urging residents to use only boiled or bottled water for drinking, cooking, brushing their teeth and cleaning. The city's water pressure dipped below environmental standards (at least 20 PSI, as mandated by the Texas Commission on Environmental Quality) due to record-low temperatures, the Houston Chronicle reported.

City officials expect the pressure to increase by Wednesday evening and return to "operational range" on Thursday, according to the Houston Chronicle.

Arctic storms dropped large amounts of snow and ice on states from the South to the Northeast over the past several days, knocking out electricity in Texas, Louisiana and Kentucky, as well as other states.

More than 3.1 million Texas customers were without power as of Wednesday afternoon, according to PowerOutage.us, which tracks power outages throughout the country. Texas has its own power grid, which has struggled amid the weather crisis.

At least 23 people have died, according to the New York Times. Included in the death toll are people who perished trying to stay warm during the storm. Earlier this week, a woman and child died of carbon monoxide poisoning in Houston after running a car in the garage to try and keep warm, Houston Police said.

In Sugar Land, a grandmother and three children died early Tuesday in a house fire, the Houston Chronicle reported. Authorities believe the family may have been using a fireplace to generate heat after their power went out, but the cause of the fire is still under investigation. Houston Mayor Sylvester Turner advised local grocery stores to stock up on water and pleaded with residents to be mindful of their water usage as hospitals were running low on the critical supply, the Houston Chronicle reported.

"Be conservative on water usage today," the mayor tweeted. "It is needed for hospitals and fires."

Residents were also advised not to use sprinklers, washing machines, dishwashers or other non-essential appliances that require water.

Many other local jurisdictions across Texas have also issued boil water notices due to the storm, including Pearland, Fulshear and Greatwood-Sugar Land, the Houston Chronicle reports.

As Texans struggles to cope, another arctic storm, nicknamed Viola by The Weather Channel, is hitting the Lone Star State with snow and ice and expected to bring bitter cold conditions to the region through Friday, according to The Weather Channel.