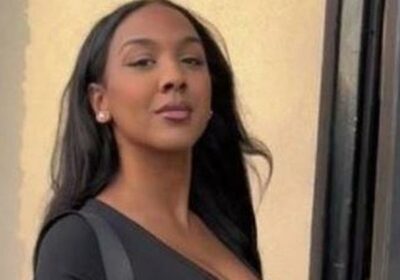 A 'hot' service worker has been hailed as a 'baddie' by customers after she wowed them with her stunning looks at work.

Jazlyn Anastasia documents her life as a waitress on social media – but she claims her good looks have made some jaws drop while she's on shift at the restaurant.

The 24-year-old, who has long dark hair and a curvaceous figure, performed a skit on social media with her co-workers to show how staff and restaurant guests respond to her when she arrives.

READ MORE: Hooters girl shows how she looked before saucy job – when she was 'overlooked'

In the video, which has gained 104,000 likes, she was seen walking through the restaurant as bar staff and "customers" stared at her with open mouths as the food was dropped and drinks were spilt.

She titled the TikTok clip: "POV: I'm on schedule."

But her fellow hospitality staff weren't the only ones drooling over her appearance as viewers took to the comments to praise her for serving some delicious looks.

One user wrote: "A serve… literally."

Another dubbed her a "baddie."

A third said: "As they should girl you’re so pretty."

"Idk if it’s the camera quality but this looks like it can be a commercial," a fourth commented.

The news comes after a Hooters girl revealed she will always be a sexy waitress until she 'can't'.

Mia works in a branch of the American restaurant which is notorious for the skimpy staff uniform – orange booty shorts and a white crop top with the owl logo.

The brunette beauty recently shared how much she earns in just one shift and, it has got people questioning if they are in the wrong line of work.

In a TikTok clip which racked up 4million views, Mia cashed up her tips after a hard day of waitressing as she started to count the big wad of notes she had in her hand.