Home » Lifestyle » ‘He’s absolutely a COVID baby’: Births up 50 per cent in some areas as Victorian baby boom surges on

‘He’s absolutely a COVID baby’: Births up 50 per cent in some areas as Victorian baby boom surges on

For much of last year, Victorians in lockdown had four permitted reasons to leave home.

Or, in the eyes of many couples, one very good reason to stay home. 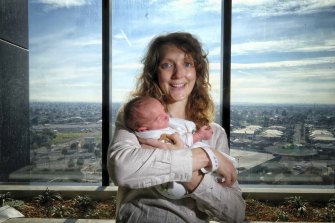 The number of babies born in Victoria has boomed over the past year, at an average of 5.7 per cent across the state but by as much as 50 per cent in some areas. Births have skyrocketed in particular in the regions, which make up seven of the top 10 baby boom areas.

Midwives and doctors witnessed the highest surge in March and May this year. Have you done the maths? That’s nine months after Victoria’s second wave lockdowns began then peaked, in June and August last year.

Melburnian Hannah Martin gave birth to her first child Soren two days ago. Was this timing always the plan or did the pandemic play a role?

“Oh, he’s absolutely a COVID baby. Yeah, no doubt. We just thought well, we’re going to be stuck here for a few years, not going overseas, the time’s right. But we’re very happy with the timing.”

Ms Martin was full of praise for the healthcare she received at Western Health’s Joan Kirner Women’s and Children’s Hospital in Sunshine. The hospital that serves Melbourne’s growing western suburbs has seen 6659 babies in the past 12 months, the highest number across Victoria.

Over the last 12 months the Hamilton area, in Victoria’s west, saw a 51 per cent increase in births. Bendigo went up 43 per cent, Ballarat up 38 per cent and Kilmore 34 per cent. In Melbourne, Sandringham hospital saw a 21 per cent increase followed by Western Health and Box Hill on 10 per cent.

The last 18 months have undoubtedly presented emotional highs and lows: whether it has been boredom, celebration, a renewed change to enjoy quality time or, like Ms Martin, no chance to travel overseas. 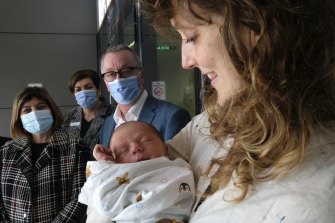 As to why regional Victoria has experienced the peak of the lockdown baby boom, Health Minister Martin Foley suggests the hike in Melburnians seeking a seachange to start a family is one key factor.

“I think what we’ve seen is a part of a movement to the regions on the back of the pandemic right across the country in fact. We’re seeing the attractions of lifestyles and opportunities in our regions grow, and that reflects particularly young families moving to those areas,” he says.

The converse effect of this unexpected boom has been an intense strain on hospital staff and budding families.

There have been reports of women giving birth in emergency departments, mothers quickly returning to hospital with complications and babies “failing to thrive” or losing more than 12.5 per cent of their bodyweight after being discharged early.

Bookings at public maternity services have jumped by up to 35 per cent while already-overworked nurses and midwives have regularly been asked to work double shifts that amount to 18 hours’ work.

Cara Kennedy, the acting maternity operations manager at Sunshine Hospital, says midwives and nurses have worked more overtime in response to the baby boom of recent months than during the height of last year’s second wave.

“It’s exhausting, it takes its toll particularly when you’re picking up extra shifts. But the staff have been incredibly adaptive and resilient, particularly with ever-evolving COVID guidelines, PPE [personal protective equipment] and surge plans.”

In response to the pressures, the Victorian government on Friday announced $13.2 million for 38 health services across the state to hire 175 extra maternity staff.

Ms Kennedy says it will allow staff to “spend more time at the bedside with the women and provide that care that really is part of our midwifery philosophy”.

Healthcare workers will probably need the support: after Victoria’s most recent lockdown in June, they could have their hands full again next March.