Home » Heiress with a £1,500 monthly allowance stays with a skint family

Heiress with a £1,500 monthly allowance stays with a skint family 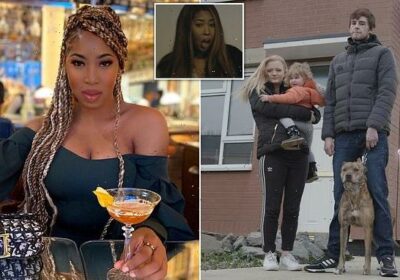 Nigerian heiress who has a £1,500 a month allowance from her millionaire granddad is reduced to tears as she hears how a struggling dad ate out of bins and slept rough as a teenager on Rich Kids Go Skint

A Nigerian heiress living off a £1,500 monthly allowance from her grandfather got a brutal reality check while staying with a skint family of three on tonight’s Rich Kids Go Skint.

Engineering student Mercedez, 24, who lives in a £2,000 a month penthouse flat in London, went to stay with expecting parents-of-one Liam and Caitlan in Doncaster on 5Star’s hit series.

Used to a life of luxury funded by her millionaire grandfather, who owns several car and engineering companies in Nigeria, the heiress splashed her cash on designer handbags, buying two to three a month up to £6,000 and spending £100 a day on food takeaways.

Meanwhile, Liam and Caitlan, who were both unemployed, scraped by on £548 a month of benefits, selling their belongings at the pawn shop to make ends meet and relying on the help of a local food bank to feed their two-year-old daughter Esme-Rose, all the while expecting another baby.

Mercedez’s worldview was turned upside down when she learned that Liam used to sleep rough as a 13-year-old and had to forage in bins in order to feed himself. 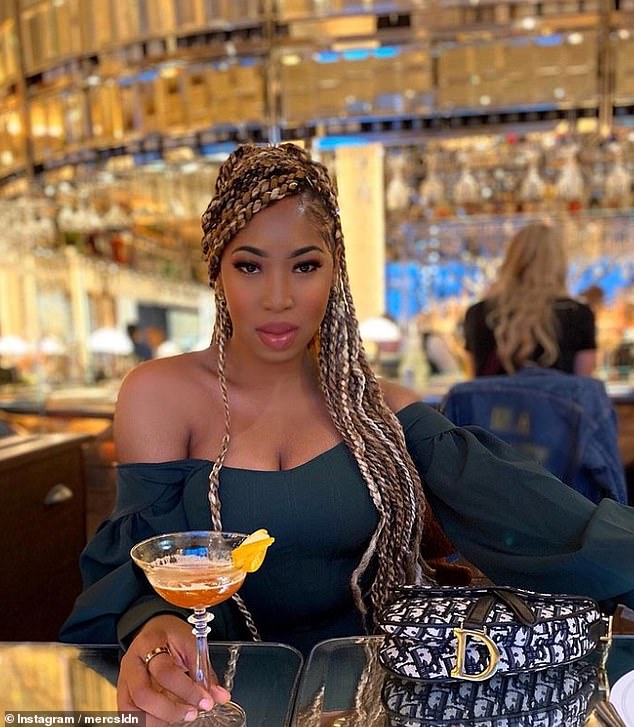 Engineering student Mercedez, 24, pictured, who lives in a £2,000 a month penthouse flat in London, went to stay with expecting parents-of-one Liam and Caitlin in Doncaster on 5Star’s observational series 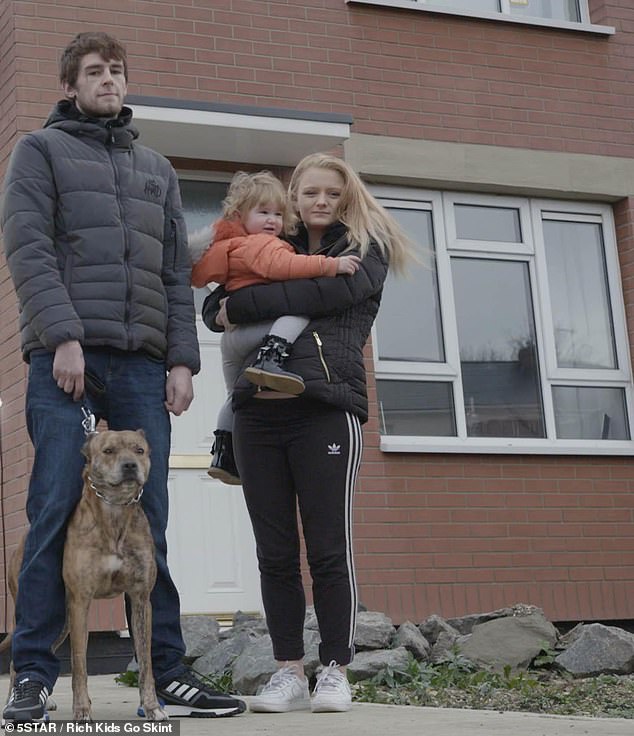 Liam and Caitlan, pictured with their two-year-old daughter Esme-Rose, admitted they struggled financially

The conversation happened after Liam hardheartedly sold a bracelet of Esme’s in order for the family to get by for the month.

‘When I was 13 years-old, I couldn’t get no money at the time, no money or job,’ he told Merecdez.

‘There’s a shop just around the corner, I had to sleep underneath it, for six and a half months.

‘This here,’ he said, pointed to a corner full of rubbish, it used to be a walk bin, where I spent most of my time, for six and a half month, behind here, eating out of bins,’ he told her. 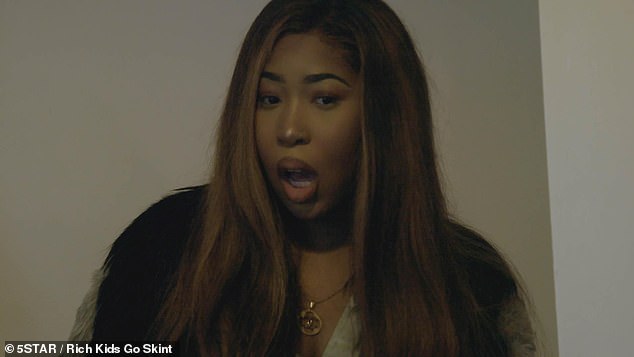 Mercedez, pictured, was shocked to hear about the couple’s financial voes and their living conditions

‘Sometimes I used to, on a Friday night, sit outside clubs begging for money, something I wouldn’t ever want anybody to go through,’ he added.

‘I can’t even imagine,’ Mercedez said, wiping tears from her face.

However, resilient Liam said he learned from the experience.

‘I am who I am today because of that reason, I went to live with my nan, my nan got me through college, I studied catering.’

The soon to be father-of-two’s voice cracked as he went on: ‘I just felt like I wasn’t good enough, I felt like, I basically grew on my own two feet. 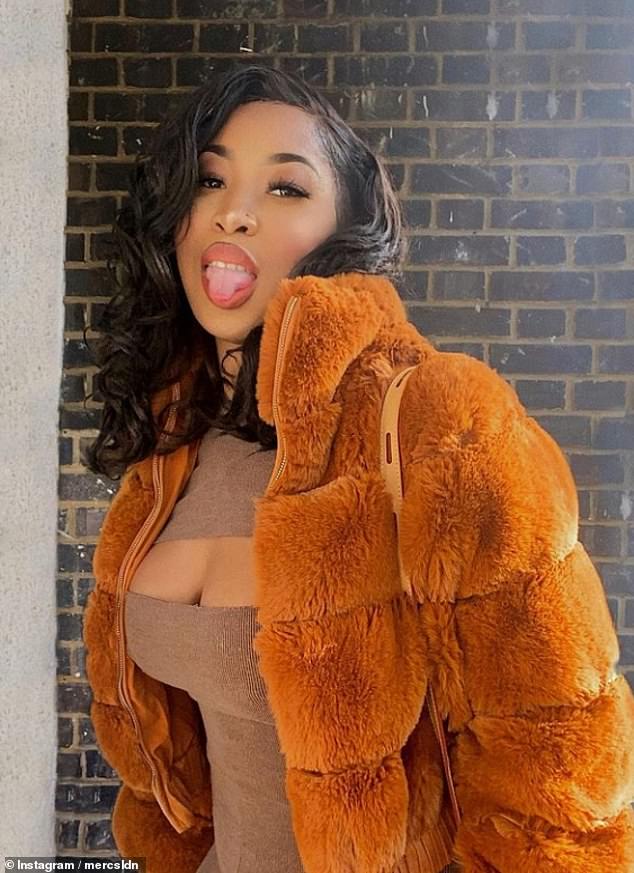 The heiress’s lifestyle was all paid for by her grandfather, and Mercedez spent £100 on food a day, never worryign baout paying her own bills 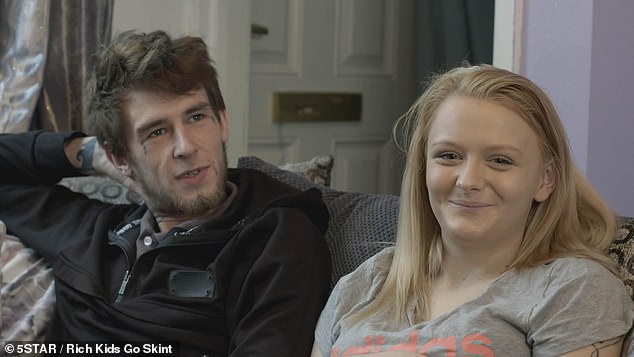 Liam and Caitlin, who were both unemployed, said they wanted to work, but hadn’t found any jobs

‘I managed to pick myself up and basically who I am today, I’m a good guy, people see that deep down,’ he added.

Mercedez, who was crying as well, had kind words for Liam after his confession.

‘From all you’ve gone through, you’re still so positive, you’re an amazing person,’ she said.

Before she went to stay with the Doncaster couple, Mercedez admitted she felt ‘out of touch,’ because of her privileged lifestyle, and she was hoping the show would be an eye opener. 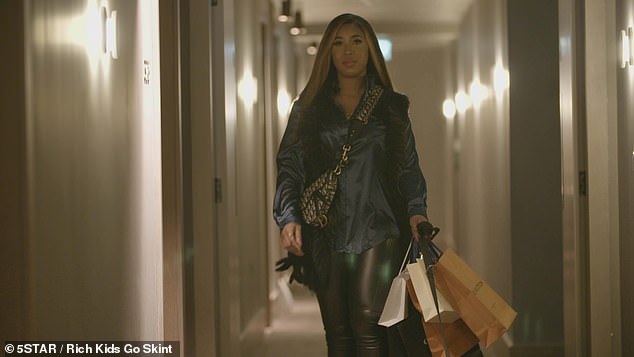 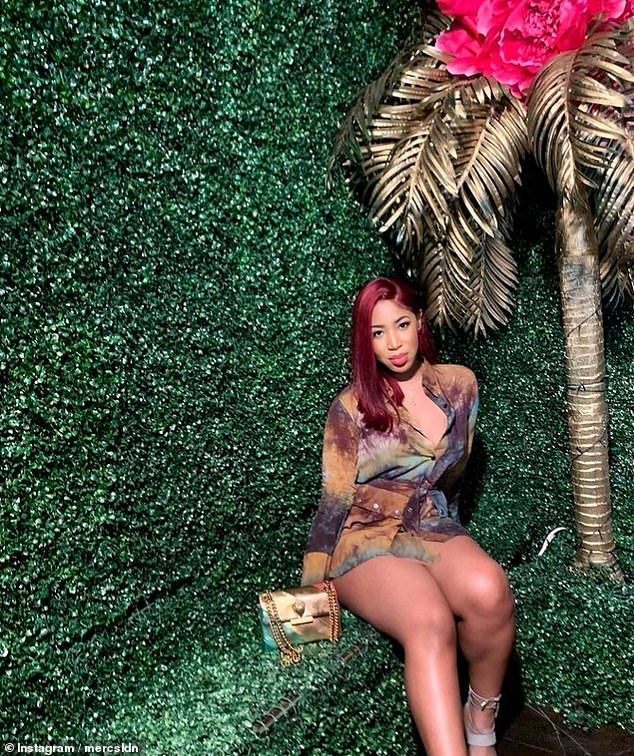 The heiress, pictured, was moved to tears when she heard how Liam spent six and a half months living rough on the street when he was 13

Having lost her father when she was four, Mercedez and her mother were financially supported by her grandfather.

‘Because of what my granddad has achieved, I’ve been able to live a luxury lifestyle,’ she admitted.

And even now that she was 24, she still received a £1,500 allowance, plus all her bills and rent taken care of.

‘If I do need more, I can just send an email to my granddad, within 24 hours the money’s in my account and I’m all good to go,’ she said.

‘Electricity, gas, I don’t know what this is, I have no clue,’ she said.

‘I prefer to keep this money to go shopping to buy bags,’ she added. 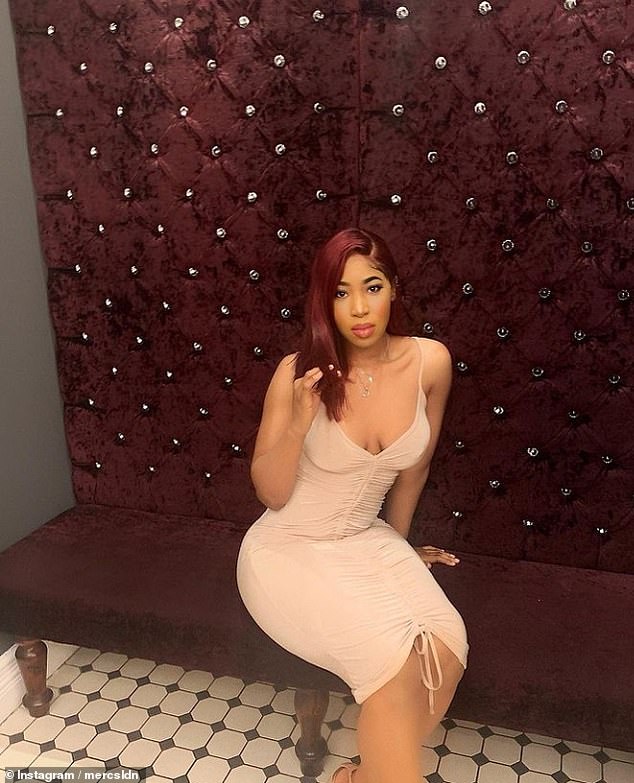 Mercedez said she only had to ask her grandfather if she wanted more money, but admitted her privileged lifestyle left her feel out of touch

The heiress had an impressive wardrobe of designer items, from £1,100 Louis Vuitton bags to £850 Gucci sneakers £900 Dior trainers.

‘I feel like when you buy designer it’s a lot more comfortable and it just looks good, everyday is a catwalk,’ she said.

While she liked to look stylish, Mercedez also splashes out on food, ordering take away for every meal, including breakfast, racking up £100 in food a day.

‘Having money on tap it has made me feel out of touch so to be thrown into the deep end would be eye opening and something that would be very, I guess, shocking,’ she said.

And she was not disappointed when she went to live with Liam and Caitlan, who stayed in a two-bedroom council house.

The couple admitted they deeply struggled financially, living on benefits and not being able to find jobs. 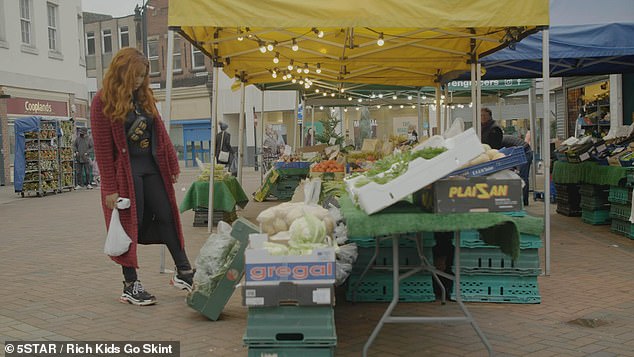 The heiress was challenged by Caitlan to buy a dinner for four on a budget of £6. She sutrggled at first, but Mercedez eventually pulled through (pictured at the market)

As well as their daughter Esme, two, they have another baby on the way and admitted they sometimes had to go hungry for a day and a night straight in order to make ends meet.

‘That’s all our life is, it’s one big fight, asking “where is that money going to come from”.’ Liam said.

Caitlan explained the couple had had to sell furniture, including their TV, in order to make extra money.

‘I do wanna work, 100 per cent want to work, I’ll do brick laying, gardening, anything,’ Liam said.

As she approached the house, Mercedez grew anxious.

‘I’m actually kinda scared of the way we’re heading to right now,’ she said, I feel we’re in Coronation Street or Emmerdale,’ she said.

Once she arrived at destination, Mercedez grew aware neighbours were gawking at her car.

‘The houses are like boxes, they’re really small,’ she added.

And once inside Liam and Caitlan’s house, she was shocked by the lack of space and small rooms, saying: ‘I am lost for words.’ 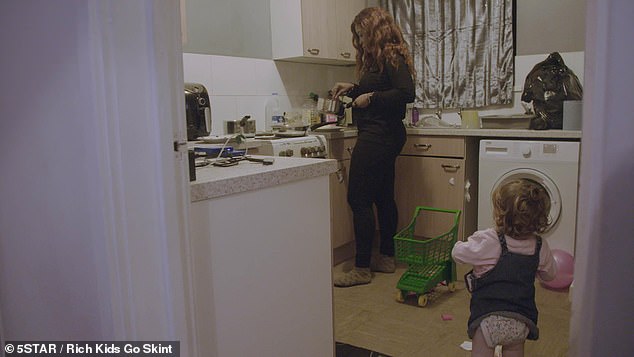 The heiress had to cook for Liam, Caitlan, Esme and herself, a world from her usual dinner takeaways

The first meeting between the heiress and the family was plagued with awkwardness, with Mercedez remarking their living-room was as big as her wardrobe, and saying ‘oh no,’ upon hearing Caitlan was expecting another baby.

The heiress was also confused about her first skint lunch, which consisted of a pot of noodles.

‘It looked like it was growing in the water,’ she told the camera.

Mercedez also seemed shocked that Liam and Caitlan admitted to her they had never heard of fashion designers Louis Vuitton and Chanel.

But Mercedez soon showed a softer side after hearing about Liam and Caitlan’s financial struggle.

‘We managed on it, don’t we,’ Caitlan said. ‘It’s a struggle but normally we spend £100 on shopping a month,’ she added.

‘Sometimes we are anxious and depressed and upset over it, I’ve gone a full day and night without nowt to eat,’ he told Mercedez.

The news was shocking for takeaway-addict Mercedez.

‘That they’d go hungry and don’t even eat for a day, I’m gonna be emotional,’ she said, with tears in her eyes. 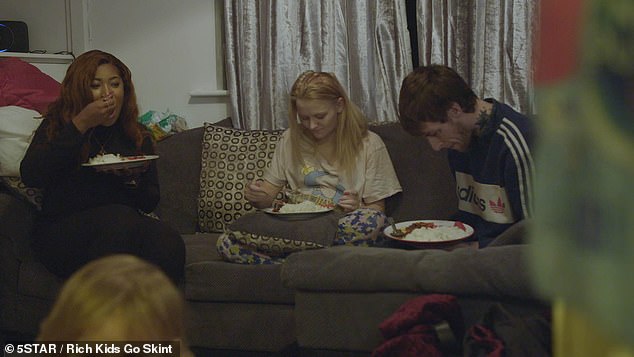 Over dinner, the couple and Mercedez chatted. After her experience, she said Caitlan and Liam had totally changed how she saw the world

‘Caitlan is 21, it’s hard thinking about when I was 21, I think about how I’d have handled all of this,

‘You’re so much more mature than me, handling all of this at the age of 21,’ she told the expecting mother-of-one.

Mercedez soon got a taste of the skint budget when Caitlan tasked her with buying a dinner for four on only £6.

She then cooked up a feast for Liam, Caitlan and her.

At the end of the experience, Mercedez revealed she wanted to help the couple get back on their feet.

She bought books for Esme, and a gift voucher for driving lessons and a written test for Liam or Caitlan.

‘I feel completely different than when I first came in and you guys showed me there way more to life than superficial goods and whatever I might be interested in,’ she told Caitlan.

‘It’s definitely made me appreciate things I might have overlooked before,’ she said.

Mercedez, i thought she was stuck up when we first seen her but she’s nothing like that, she really understands how we live,’ Liam said.

‘As much as I’ve been blessed, I haven’t actually taken a step back to realise what I have and just how different everything could be, this has been amazing I feel like I really needed this, i’m very happy I’ve done this,’ Mercedez said.

Since the show, the heiress as drastically reduced her spending and started donating her designer clothes and accessories to charities.

Rich Kids Go Skint is available on My5.