Home » Lifestyle » Hamilton is both high art and thrillingly entertaining

Hamilton is both high art and thrillingly entertaining 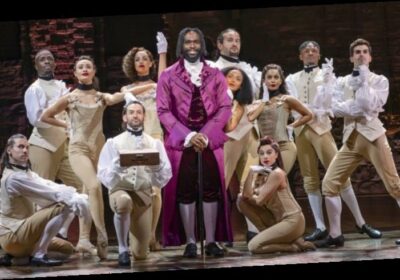 Yes, it really is that good.

How better to depict the American Revolution than with a hip hop musical theatre revolution? The words fly at you like grapeshot from a canon, but from the moment you adjust to their velocity the history becomes the hip hop present, so you ride the raps as if on a jet-stream, and the zinging cleverness of the rhymes (“doing this/ruinous”; “jettison/debt is in”; “harem/share ’im”) makes your brain buzz like a hive. 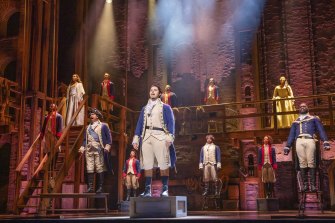 Jason Arrow and the Australian Hamilton cast at the performance premiere in Sydney on Saturday night. Credit:

That cleverness is the perfect shorthand for characterising one who was both loquacious to the point of being prolix and a towering intellect. Alexander Hamilton rose from the gutter in the Caribbean to become as influential as anyone in shaping what became the United States. In a life less than 50 years long he was a master of military stratagems, political essays, legal arguments, constitutional arrangements, banking systems, streamlining currencies and more. He also featured in the new country’s first political sex scandal.

The brilliant Lin-Manuel Miranda not only wrote the words and music, he originated the title role in New York, so each successive Hamilton has the show’s creator looming over him. Jason Arrow shrugs that shadow aside and hits the bullseye. It’s a devilish part, not only because of its immensity (the lion’s share of the show’s 27,000 words), but also because the character is not inherently sympathetic. The real Hamilton was cocky and impatient for his greatness to be recognised, so Arrow has to win us over with some cracks of vulnerability, while convincing us of Hamilton’s dazzling intelligence. He does all that and more.

It’s a level of excellence that runs like a river of gold through the writing, performing, music, design (including Howell Binkley’s peerless lighting and Paul Tazewell’s conjuring-trick costumes), Andy Blankenbuehler’s choreography (that often helps propel the story, rather than being merely decorative) and Thomas Kail’s fluid direction.

Miranda uses rap to solve a problem that’s existed since recitative faded from fashion in opera and musicals: how to communicate swathes of information in a rush, without resorting to dialogue (given that songs communicate emotion more efficiently than information). Had he penned Hamilton as a conventional musical, he’d have had to drastically narrow a story that in its sheer completeness is more like a novel than a play or film, let alone a musical.

The rap component doesn’t just accelerate the dissemination of information, it gives the whole show a momentum that’s echoed in the instant changes of time and place without changes to David Korins’ set.

Furthermore, by mixing rap and song, Miranda makes time a toy, so for instance Hamilton meets, flirts with, proposes to and marries Eliza (Chloe Zuel) in minutes. And it’s not as though he uses rap because he can’t write songs – in fact he shames much recent composing for musical theatre. My Shot has the anthemic “Rise up!” refrain, Helpless is a modern R&B classic, Ten Duel Commandments is almost frighteningly visceral, The Room Where it Happens is wickedly catchy, and both Hurricane and Burn are exquisite ballads.

However much the story-telling fizzes and pops, it would count for nothing if it didn’t hook our hearts, and it does this again and again as we share triumphs and desolation from multiple characters’ viewpoints. Zuel deploys a mellifluous voice while conveying Eliza’s inner core, and Akina Edmonds sparkles with vitality as her sister, Angelica. Matu Ngaropo has presence as Washington, Victory Ndukwe cuts a capering Lafayette and even more rollicking Jefferson, and Brent Hill delights amid the waspish humour of King George.

A big part of Miranda’s narrative ingenuity was setting up Burr as an antagonist from the outset; one whose story constantly intersects with Hamilton’s, culminating in the equally tragic and foolish duel. Lyndon Watts expresses the character’s urbane dryness as well as a darker relentlessness that almost matches Hamilton’s.

This show is both high art and thrillingly entertaining, and don’t despair if you have to wait to see it, because the cast will only get better.