On imdb.com Dickinson, the 10-part series that was first cab off the rank for Apple TV+, has a decent enough user rating of 6.9 out of 10. But actually read the reviews people have posted there and you realise how much that average is a result of wildly differing opinions, more nines and 10s at one end, and ones and twos at the other, than a consensus in the middle that, yep, it’s actually pretty good.

"Dreadful", "seriously awful", "a disgrace and a stain on Emily Dickinson's name" go the 1/10s. 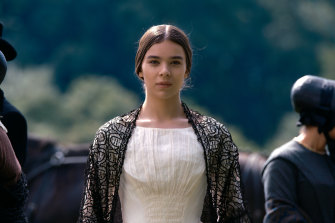 So, who's right? For once, I'd have to agree with the mob: I'd rate it somewhere around that 6.9, maybe even a little higher.

Imagine a mash-up between Pride and Prejudice and Gossip Girl and sprinkle in a little Marie Antoinette and you have some idea what to expect with this unconventional take on the historical biopic. It's beautifully dressed and costumed, well-researched, faithful to the source, but it's also modernised, rich with slanguage, and leavened with music from your teenager daughter's playlist.

As Dickinson, Hailee Steinfeld – herself likely to feature on many a teenage daughter's playlist – is moody emo queen, obsessed with death and determined to find a way to render it in verse. She lives with her well-to-do parents in a large house in Amherst, Massachusetts, and rails against the coming of the railroad because it will destroy her favourite tree. "I need that tree," she implores her father (Toby Huss), a lawyer, politician and chauvinist of the highest order. "It's where I go to think, to listen. If you let them kill that tree, you're killing me."

Earnest though Emily is, she's also up for it. When her father and mother (Jane Krakowski, who has most of the seriously funny moments) go away for a night, she convinces her sister Lavinia (Anna Baryshnikov, daughter of Mikhail) and brother Austin (Adrian Enscoe) to join her in throwing a house party, complete with liquid opium, lollipops and lascivious dancing. The only thing missing is the Facebook invitation.

"Parties are like shipwrecks," Emily declares. "You should emerge from them soaking wet, out of breath and hopelessly disoriented. Come on, let's do it."

Emily's true love, of course, is the woman her brother is determined to marry, Sue Gilbert (Ella Hunt, who has more than a hint of the young Katie Holmes about her). Theirs is a love that dare not speak its name, except that Emily does dare speak it – in her poems and letters – loudly and often. But in an era when her father could write a pamphlet titled On the Proper Place of Women and demand, without irony, that Emily read it and take its directives to heart, that expression could only ever be private. 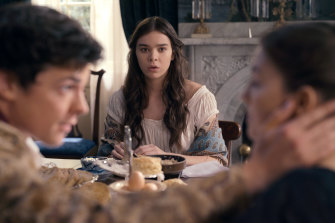 It's a fine and tricky balancing act Dickinson attempts, freeing Emily from the fustiness of academic studies and imbuing her with a sense of teenage passion and rebelliousness and desire, while at the same time hewing close to the facts of her life. Oh, and playing it in equal parts for comic and dramatic effect. But, for the most part, it succeeds.

She may wear Victorian clothing and endure the social constrictions of an earlier age, but this thoroughly modern Emily is easy to relate to, in all the ways that really matter.