Spoilers ahead for the Jan. 31 episode of Grey’s Anatomy. Fans were expecting someone to die on Grey’s Anatomy, but not the person who ended up actually passing away. Catherine Avery survived Thursday’s dramatic episode, but Meredith’s father Thatcher died on Grey’s Anatomy. While Catherine underwent surgery to extract the cancerous tumor on her spine, Richard encouraged Meredith to visit her father — who didn’t have much longer to live himself.

The episode was split into telling Catherine’s story and Thatcher’s, and Catherine was ultimately able to walk away from her dangerous surgery with all her motor functions intact. Unfortunately, her doctors were only able to take out 95 percent of the tumor, so Catherine will still have to do three-month checkups to monitor the cancerous nodule that was left behind. But she was just happy to be alive and able to operate, chase her granddaughter around, and choose the movies on date nights.

Thatcher wasn’t so lucky, but he and Meredith were able to get some closure before he passed away. Meredith wasn’t eager to visit him, but she did as Richard asked and actually was able to come to a good place with her dad in the end. "There’s so much to say, I don’t know what to say," Thatcher said when Meredith entered the room. She replied that it was OK, they could just sit with each other. 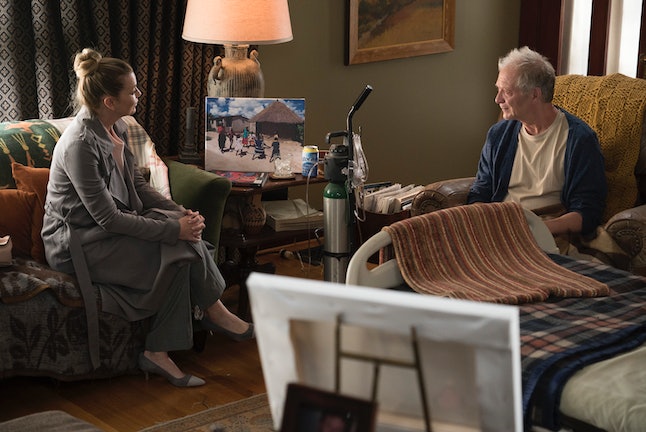 Eventually he started to open up that he’d had time to reflect on his actions. He apologized for the mistakes he’d made in his life and in Meredith’s, and he understood that she had every right to still be upset about some things he’d done. It was clear in the end what meant the most to him in his life — his family. His room was decorated with pictures of his loved ones, with photos of his daughters Meredith and Lexie (R.I.P) taking center stage. "I had a life because of you," Thatcher told Meredith, acknowledging that she once gave him part of her liver.

Thatcher was even seemingly able to forgive Meredith’s mom for sleeping with Richard. When he found out they’d had a daughter (Maggie), he said he was glad at least something good came out of that situation. Most importantly, he told Meredith that if he could do it all over again, he would still marry Ellis, because even if they weren’t happy all the time — that’s how he got Meredith. The two then bonded over how brilliant, but frustrating Ellis could be. 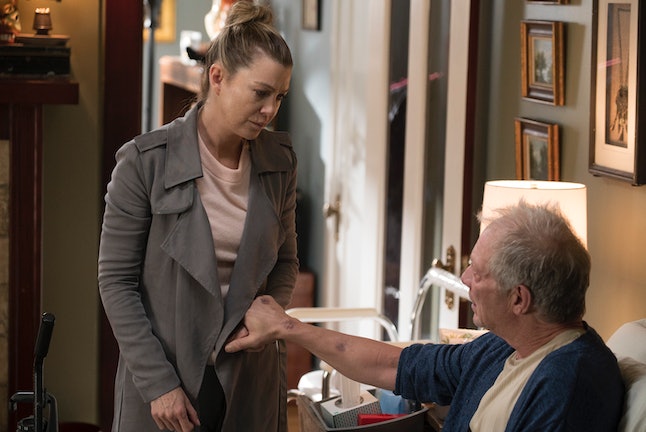 Meredith spent her father’s final moments telling him about how wonderful his grandchildren are, and that even though he didn’t get to know them, he would like them. He died in Meredith’s arms, and ultimately gifted her some of his belongings to pass on to her children. Meredith and Thatcher never had a perfect — or really even good — relationship, but in the end they were able to see past that and love each other as family. It gave Thatcher the closure he needed to be able to let go, and Meredith the closure to move on in life knowing that her dad may have been messed up, but he did love her.

She never would have gone to see him on her own, so Meredith owes Richard a lot for prodding her into doing so. She’s a strong woman, but being able to get that closure — especially after such a complicated life together — will help Meredith heal in ways she probably didn’t even know she was still hurting.

And so Grey’s Anatomy lost another character, but it was a pretty good way for him to go out — and that’s the best a character like Thatcher could ask for.