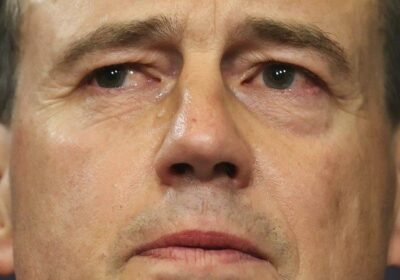 Health Minister Greg Hunt has choked back tears while recalling violent threats made against him and his young family as the Australian Federal Police reviews the security arrangements of federal MPs following the stabbing murder of their British counterpart. 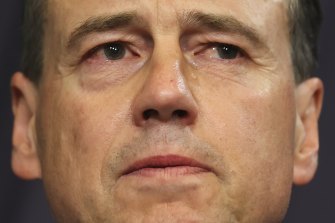 Health and Aged Care Greg Hunt sheds a tear when speaking about threats to his family, during a press conference at Parliament House in Canberra. Credit:Alex Ellinghausen

Mr Gunner’s family had to leave their Darwin home after his personal address was disclosed in front of a large contingent of anti-vaccine protestors at the weekend.

Mr Hunt told reporters in Canberra he had never spoken about details of the threats received.

“There was a period where, yeah, the lives of my children were threatened quite openly some years ago, and that, it was a matter of great concern. But we have very fine Federal Police in this country,” an emotional Mr Hunt said.

“To those that think violence or the threat of violence is acceptable in any way, shape or form, it is not. As a country, we have to, I think, re-learn the value of respect.

“And I don’t mean holding… parliamentarians up on any pedestal. We’re not better than anybody, but they’re not worse than anybody.

“They are overwhelmingly public servants that seek to serve the nation, and there will be differing views and different approaches. But this notion of national tolerance and mutual respect is something I believe in ….we follow the advice of the police at a state and federal level based on threat assessments, but it’s that culture of mutual respect, which is critical.”

Home Affairs Minister Karen Andrews met with AFP Commissioner Reece Kershaw on Tuesday after half a dozen Coalition members raised concerns about the safety of their colleagues and staff members in their weekly party room meeting.

She told Parliament on Tuesday evening that members should not let the murder of Conservative MP Sir David Amess at a public meeting with voters deter them from important work in their communities.

Federal Agriculture Minister David Littleproud said he had received “a number of death threats” during his five years in parliament and had an AFP security detail at times as a minister.

“Obviously that comes with what comes out of my mouth sometimes, so… but we live in a free country and I should be able to say what I want within reason,” the Nationals MP said.

“But obviously, I trust the AFP in making determinations of whether I need protection or not. I think Australia is a very mature country. They understand the political process. Some of them aren’t as engaged in the political process as we’d like, but I think broadly we’re a safe country.”

Opposition home affairs spokeswoman Kristina Keneally said she was personally thankful for the effort the AFP makes to protect federal MPs of all political persuasions and said she had received threats in recent months.

“When my children were younger it was quite stressful. I had situations as NSW premier where I had police in my house with their guns drawn, clearing rooms to ensure an intruder wasn’t there, with my children upstairs. This is part of the job, unfortunately.”

She took aim at several Coalition MPs who she accused of giving a “wink and a nod” to ideologically motivated groups, saying it was in the national interest that they were called out and rejected by everyone from Prime Minister Scott Morrison down.

“We all have a role to play in saying Australian democracy is worth preserving. It’s better than this. If there are things that Labor can do to assist the government, in making a more secure environment, then I’m happy to do that,” she said.