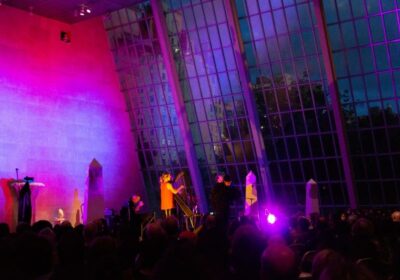 The Temple of Dendur in the Egyptian art wing of New York’s Metropolitan Museum of Art is one of the most unique and visually arresting places in a city filled with them, containing the 2,000-year-old Temple itself along with other sculptures and pieces of art, a large reflecting pool and a giant, 25-foot-tall floor-to-ceiling window that extends the entire length of the hall and overlooks Central Park.

It also may be the most unique and visually arresting music venue in the city. Over the years the room has hosted concerts by everyone from Interpol to the Estonian Philharmonic Chamber Choir, but it’s hard to think of a more fitting artist for such a setting than Pakistani singer Arooj Aftab, who won a Grammy earlier this year for her song “Mohabbat” from her latest album “Vulture Prince,” and was also nominated for Best New Artist.

This is less due to a cultural connection than the sound of her music: She is a stunning singer, with a voice that can swell or diminish with remarkable agility as she sings often-complex melodies following Eastern music’s tricky, fluid scales. She is also accompanied by an unusual band of stellar musicians, and gives them ample room to showcase their virtuoso skills: Harpist Maeve Gilchrist, whose playing ranges from delicate to downright aggressive; guitarist Gyan Riley, who reels off astonishingly fast solos on an acoustic guitar but is equally adept at holding down a simple chord progression; bassist Shazad Ismaily, who doubled on synthesizer; and violinist Darian Donovan Thomas, whose soaring playing often didn’t sound like a violin — while all of the instrumentals were technically “organic,” all four had a battery of effects at their feet. Unlike most non-traditional music venues, the sound in the Temple was spot-on and stunning, projected by four obelisk-shaped speakers on the sides of the stage that were impressively on-theme for the Egyptian room.

Despite the formality of the setting and the intricacy of the music, Aftab’s between-song banter was irreverent and often hilarious. She spoke of feeling intimidated “in this beautiful place full of stolen art” (although the Temple was gifted to the museum by the Egyptian government in 1965); “People think these songs are serious, but most of them are about being intoxicated and completely failing at love.”

While she played most of the set wearing a very large, puffy, ruffled black top, she gestured at it and said, “I can’t even tell where my arm is — I feel like I’m in a car. If my stylist is here, could you get the other thing? I might abandon this,” and sure enough, in a few minutes her stylist delivered a sleek grey cloak.

But there were no laughs when the group performed, focusing primarily on songs from “Vulture Prince.” The musicians were accompanied by a gently pulsing light show and projections that at times reflected off of the pool with several statues at its side; at another point their shadows were cast, amid lighting, onto the wall to the left of the stage. And during the occasions when the intensity built and at one point became impressively filled with aggressive, discordant noise, the lighting was right with it.

They closed with two of the highlights from “Vulture Prince,” the Grammy-winning “Mohabbat” — “This is the song that everybody likes, the happy one, that’s why we play it at the end — you’re supposed to save the bangers for the end, right?” — and a breathtaking version of the slow and lilting “Saans Lo.” Then the musicians left the stage and walked down the aisle through the crowd, past the Temple and the millennia-old art, after creating their own performance for the ages.