Home » Lifestyle » Giselle review: Beauty that can move to tears

Giselle review: Beauty that can move to tears 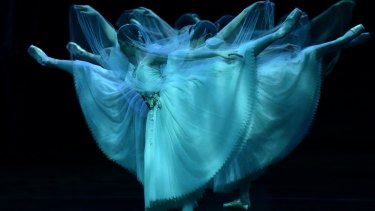 Exquisite dancing and convincing acting by Ako Kondo and Chengwu Guo gave the Australian Ballet's opening night audience a memorable Giselle. Maina Gielgud's production may be more than 30 years old – the ballet itself is 178 – but it is still capable of bringing tears to adult eyes.

Ako Kondo looks the epitome of those old engravings of early Giselles, so light she is almost the floating spirit that she represents in Act II. In Act I, her joy at finding love is infectious, filling the stage with warmth. And the quality of her dancing, its beauty and precision, is at the heart of her outstanding performance.

Chengwu Guo's portrayal of the philandering Count Albrecht is interesting in that he is less charming than most at the start, but softens from the impact of the tragedy his character precipitates. His dancing is impeccable, both in the lyrical simplicity of Act I and the bravura aerial feats of Act II.

Bravo to both of them.

The achievements of supporting performers were creditable but variable on the night. The peasant pas de deux usually provides a choreographic highlight in Act I, but Jill Ogai and Marcus Morelli might have been put off by a slight slip early on to give an adequate rather than an exuberant performance.

Andrew Killian's rough-hewn Hilarion is exactly right. Olga Tamara, as Giselle's mother, is pivotal to the drama, as she should be. Timothy Coleman, in little more than a walk-on role as Albrecht's attendant, made a strong impression for his thoughtful, clear-cut presentation.

Nicola Curry is an authoritative Queen of the Wilis, with appropriate big jumps, but not as menacing as she might be. Similarly, the corps of betrayed Wilis were admirably synchronised without being threatening.

Lucky Australian dancegoers have been fortunate in their contact with Giselle in the past few months. In November, Teatro alla Scala Ballet Company brought its production to Brisbane, offering a particularly satisfying combination of dance history with a contemporary dramatic edge. And Meryl Tankard's Two Feet at the Adelaide Festival allowed us a glimpse of Natalia Osipova's supremely tragic interpretation in a blended role.

All add to the richness of experience with this ballet classic, which in the AB's version has set designs by Peter Farmer gracing the choreography of Marius Petipa, Jean Coralli and Jules Perrot to the music of Adolphe Adam, sympathetically played by the Opera Australia Orchestra.