Home » Lifestyle » From Seth Myers to Liam Gallagher, Amyl and the Sniffers soak up global spotlight

From Seth Myers to Liam Gallagher, Amyl and the Sniffers soak up global spotlight

Amyl and the Sniffers have gone a long way to rock ‘n’ roll over the past few months, playing California’s famous Coachella festival in April and appearing on US television before wrapping up a three-month international tour in Madrid last week.

They flew home the next day, but there was little downtime for the hard-working Melbourne band who have become one of the country’s biggest acts. Their Australian tour cranks up this weekend in Queensland, and includes a July 24 show at Byron Bay’s Splendour in the Grass, ahead of hometown shows at The Forum Theatre. 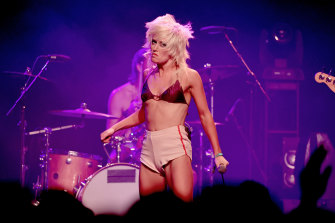 Amy Taylor, vocalist with Amyl and the Sniffers, on stage at Coachella in California in April.Credit:Theo Wargo/Getty

Amyl and the Sniffers will be playing alongside Gorillaz, the Strokes and Glass Animals for Splendour in the Grass, which also features local stars Tim Minchin, the Avalanches, DMA’s, G Flip and Genesis Owusu among more than 100 live performances across three days and nights.

Among their many tour highlights, Amyl and the Sniffers supported Liam Gallagher at Knebworth and had a television appearance on Late Night with Seth Meyers. Since storming the Coachella stage, the band played almost 50 shows across the US, Europe and the UK.

“That [Seth Meyers performance] feels like three years ago,” vocalist Amy Taylor said. “It was pretty cool … and Seth was really nice. He came into the green room and took a selfie with us.

“Looking out at the audiences, there’s been all different age groups, different sizes and shapes … and that’s what’s really special, bringing a bunch of different people together.”

Looking out at the audiences … that’s what’s really special, bringing a bunch of different people together

Taylor, guitarist Dec Martens, Gus Romer (bass) and Bryce Wilson (drums) are headlining a dozen shows around the country, before returning overseas in September for more dates in North America, the UK and Europe.

And they’ll reunite with Gallagher in Byron Bay, where the former Oasis frontman is also performing on the final day of the festival. 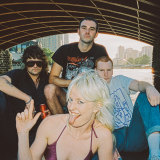 Amyl and the Sniffers are back from a hugely successful overseas tour and ready to rock local audiences.Credit:Jamie Wdziekonski

“We’re all pretty pumped to get home, the tour has been fun and playing shows has been really fun, but everyone is looking forward to seeing their mates,” Taylor said.

“And we’re really looking forward to all those [Australian shows], I reckon they’ll be fun.”

A busy tour schedule was something Taylor could only dream of during months of COVID lockdown in Melbourne. Since restrictions lifted, they band seized the chance to support their latest album Comfort to Me with shows in regions they last toured more than three years ago.

As well as songs from their 2019 ARIA Award-winning self-titled debut album and newer songs, Martens said they played a few covers as well, including Cold Chisel’s Bow River.

“There was a guy in Amsterdam who sang every word … he wasn’t even Australian.”

Almost a year since Comfort to Me reached second spot on the ARIA album chart, Romer said the band is thrilled to back on stage, cranking out live music.

“You tighten up when you play every night, you get better,” he said. “And you get more receptive to subtle nuances and how your bandmates are playing … it’s just tighter and better.”

Sydney band C.O.F.F.I.N supported Amyl and the Sniffers on the US leg of their tour and will head out with them again for the upcoming Australian shows.

“They’re one of our favourite bands, so it was cool seeing them play every night,” Taylor said. “They were really good and won over a lot of hearts.”

Amyl and the Sniffers play Theatre Royal at Castlemaine on July 17; Melbourne’s Forum Theatre on July 19 and July 31 (sold out); Frankston’s Pier Bandroom on August 4; and Colour Club in Carlton on August 14. For more information, go to amylandthesniffers.com