CHARLESTON, W.Va. — A former Miss Kentucky who is a teacher in West Virginia has been charged with sending nude pictures to a 15-year-old former student. The Kanawha County Sheriff’s Office says that 28-year-old Ramsey Bearse was arrested Friday and charged with four felony counts of distributing or displaying “obscene” photographs to a minor. 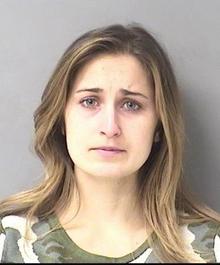 A criminal complaint says the student’s parent informed authorities of lewd pictures sent by Bearse that were found on the teenager’s phone. The unidentified parent said Bearse had been the boy’s teacher during part of his time at Andrew Jackson Middle School in Cross Lanes.

Authorities say Bearse admitted to sending the nude photos on Snapchat. It’s unclear whether she has an attorney.

The sheriff’s office said Bearse was released on a $10,000 bond following her arraignment.

A spokesman for Kanawha County Schools declined to comment but confirmed that Bearse was a teacher at the school.

Under her maiden name of Carpenter, Bearse was crowned Miss Kentucky in 2014.

Bearse is the second former Miss Kentucky in 17 months to be arrested. Last year a grand jury indicted 28-year-old Kia Hampton for smuggling marijuana into an Ohio prison for an inmate.