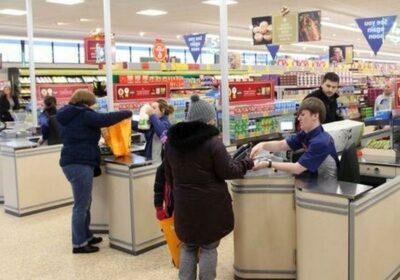 We’ve all been there… standing at the Aldi checkout waiting to load up our trolley when, bam, your shopping is being launched at you at the speed of light.

Okay, maybe that’s an exaggeration, but Aldi does employ the German method at its checkouts which requires the cashier to move your groceries through quickly.

Technically, you’re supposed to throw your shopping into your trolley and pack it at the bench along the wall after you’ve paid.

But, why do the Aldi staff go as fast as they do?

Well, on Reddit, a former staff member tried to explained.

They wrote: “Former Aldi cashier here. You actually have to hit a percentage of 83% or higher on item per minute scanned.

“They would get upset if you didn’t get 95% or above. Some cashiers I worked with would hit 110%. Less than 5% on voids and you had to hit the suspend key at least once to pause the transaction.

“Had to be 100%, but I would get like 150% because I would pause the transaction if the person was putting stuff too slow.”

They added: “Also, had to have less than three seconds when starting a new transaction. If you ever notice, they always put the item to be scan by the scanner, then unsuspend it.

“You can get a 0 seconds between customers.”

When someone asked for clarification on the percentages they continued: “The way I took it was: 60 seconds in a minute. If I scan 60 items in a minute, that should be 100%.

“83% is what Aldi wants. My store wanted 95%. If you didn’t meet the 83%, you went to a training class. After that they could fire you. That’s why they go so fast. They’re literally being timed.

The staff member added: “Well sorry that the card machine wouldn’t work unless I unsuspend it so they can use it and then take three mins putting their pin and whatever else.”

In the comments, people argued that the system might not always work for people.

One person said: "I mean people with disabilities, and pensioners with health and mobility issues exist.

“There must be some kind of consideration for those customers and dispensation for the staff serving them.”

While another added: “I'd rather Aldi added 1p to the cost of everything and allowed their cashiers to operate like human people instead of machines.”

To which another staff member replied: “I've previously been an Aldi cashier, and I understand that I can scan items faster than some people can pack them/put them in their trolley. Particularly older people.

“And the barcodes are so big that I just need to push items past the scanner in any orientation and it will usually get it.

“By the way, the actual life pro tip for when we are too fast is to simply ask us to slow down. I got asked by some people to slow down, and I was happy to because of course customer service/experience takes precedence over efficiency.”

So, now you know – staff aren’t going fast to catch you out they just have targets to meet.

And, you can just ask them to go slower…