Getting glammed up! Tayshia Adams stepped out for her first public appearance since news broke last month that she and fiancé Zac Clark split.

“She is doing amazing and great,” a source exclusively tells Us Weekly of the Bachelorette cohost, 31, following her breakup.

Adams was all smiles when she attended Footwear News’ 35th Annual FN Achievement Awards in New York City on Tuesday, November 30. The former Bachelorette, who met Clark, 37, while filming season 16 of the series in 2020, was in attendance to present an award to Hoka One One. 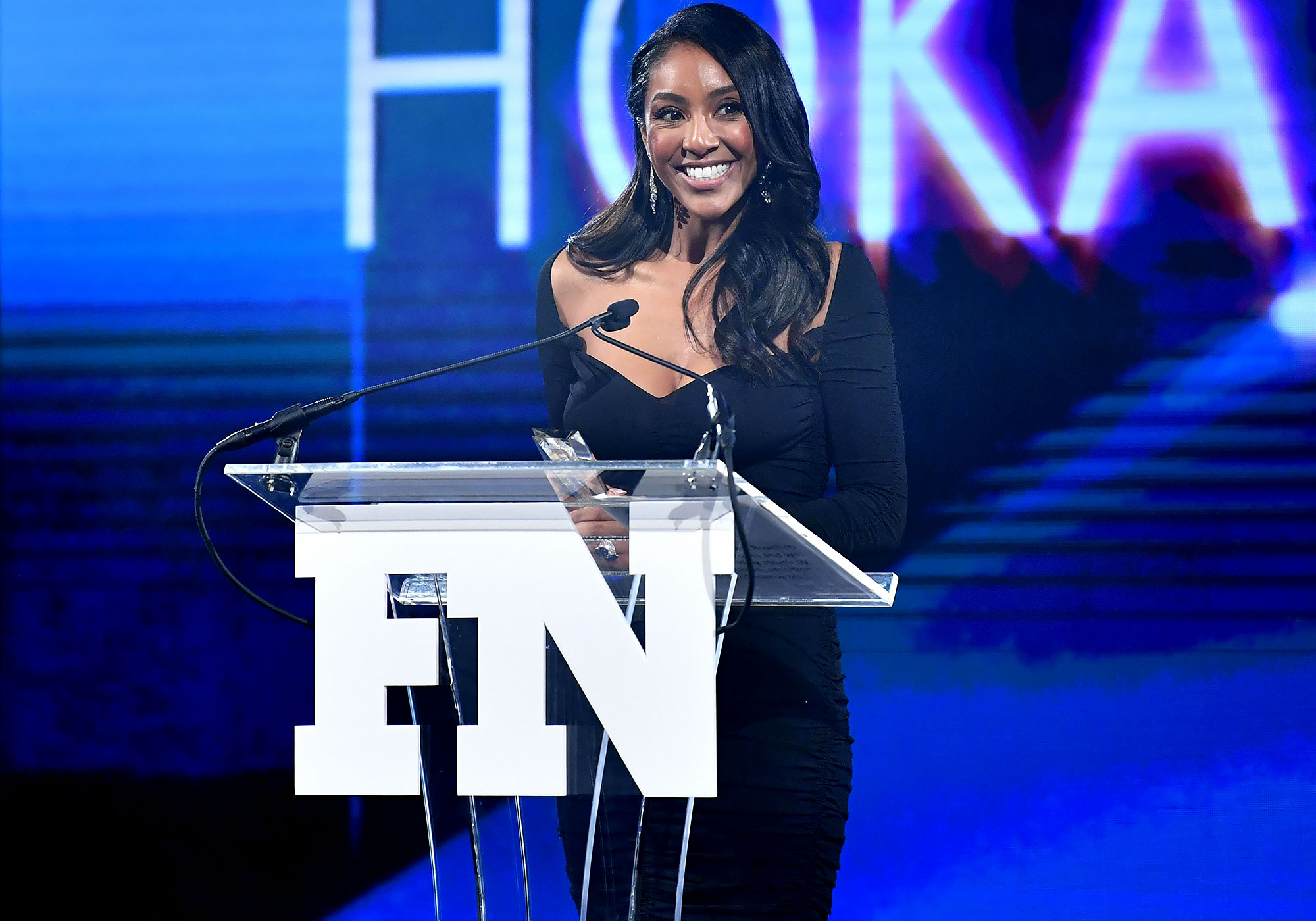 “It was a great night for all attendees,” an insider tells Us of the event, noting that Adams presented Hoka — which is the shoe brand she wore while running the New York City Marathon — with the trophy for Brand of the Year.

The California native, who relocated to the Big Apple in December 2020 after her engagement played out on the ABC series earlier that month, was a “bit nervous on stage,” the source says.

Tayshia Ditched Engagement Ring Ahead of Zac Split: Signs It Was Over

“She lost her thoughts for a moment, apologizing to the crowd saying, ‘Oh my god you guys, I’m so sorry!’” the insider adds.

Adams wore a little black dress, which she spiced up with a diamond and sapphire ring (not her engagement sparkler) on the red carpet, before going inside the FNAAs. The annual awards night celebrated the footwear industry’s biggest names and innovations.

The following day, Clark made his first public appearance since the breakup while attending Caron’s 15th Annual Greater New York Community Service Awards Breakfast. The New Jersey native’s Release Recovery Foundation was among the honorees at the event, which recognizes people who have made outstanding contributions to the fight against drug and alcohol addiction.

Adams and Clark found love on season 16 The Bachelorette, with their engagement airing in December 2020. Nearly one year later, they sparked split speculation after running the New York City Marathon together.

While the Release Recovery cofounder gushed over the former phlebotomist one day after they competed the race on November 7, eagle-eyed fans noticed Adams without her engagement ring on while tapping two “Bachelor Happy Hour” podcast episodes later in the month.

Bachelor Nation Couples Who Have Split in 2021

The “Clickbait” podcast cohost continued to fuel breakup speculation when she was again spotted without her diamond sparkler while attending the House of Gucci premiere solo on November 16.

Us confirmed on November 22 that the duo called it quits, just three days after Life & Style reported that they were taking a break.

“Tayshia Adams and Zac Clark are no longer a couple,” a rep told Us at the time.

The duo “couldn’t fully commit to each other,” a source exclusively told Us last month, noting, “They eventually realized it wasn’t going to work.” The insider added that there is a lot of “love” between the pair, so “it’s going to be a hard breakup” for both of them.