The controversial voter ID legislation, introduced to Parliament on Thursday, would require people to present documents such as a driver’s licence, Medicare card or bank statement to vote at the next federal election. 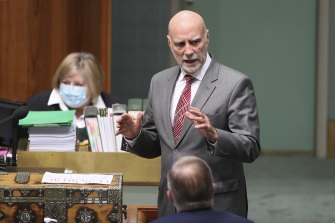 Those unable to provide documentation would need another person to vouch for them or they would have to submit a “declaration vote” that would be checked by polling officials.

Wiradjuri man and research fellow at UNSW’s Centre for Social Impact, James Blackwell, said the proposed changes would make voting too difficult for many Indigenous people, particularly in remote areas.

Mr Blackwell said while he didn’t want to focus on the disadvantage of Aboriginal people, it was a reality that there were often barriers preventing people from accessing basic services.

“There isn’t this instant ease of access to government services, often it involves many hours of travel, sometimes time off work, you have to go large distances and potentially spend amounts of money you wouldn’t normally have to,” he said.

According to the Australian Electoral Commission (AEC), the national Indigenous enrolment rate is 79.3 per cent, compared to 96.2 per cent for the wider community. But in jurisdictions such as the Northern Territory and Western Australia, the Indigenous enrolment figure is as low as 69 per cent.

Government frontbencher Angus Taylor, who introduced the bill on behalf of Special Minister of State Ben Morton, said the changes would prevent people from casting multiple votes or voting under false identities.

“The measures in this bill will bring Australia in line with voter identification practices of other Liberal democracies … no voter will be denied a vote,” Mr Taylor said.

However, electoral commissioner Tom Roberts told a Senate committee earlier this year the problem of voter fraud was “vanishingly small”.

“In the last election, there were 15 million votes cast. We barely had 2000 instances of irregularities … it feels very American culture war, adopting this Republican Party stance of ‘there’s something wrong with the polls’,” Mr Blackwell said.

The Human Rights Law Centre also disputed the need to amend the current electoral legislation, with senior lawyer Alice Drury saying she was “deeply concerned” it would disenfranchise Indigenous people, the homeless and people living with disability.

“There is absolutely no issue of Australians voting more than once in elections and I think Australians will be rightly cynical that in the midst of so many political scandals the Morrison government is pressing for a law that isn’t backed by any evidence and has all the hallmarks of voter suppression,” she said.

The proposed legislation faced fierce opposition from Labor, with veteran Labor MP Warren Snowdon, who represents the NT seat of Lingiari, telling Parliament Aboriginal voters in his electorate would be left worse off.

“I’ve been here 33 bloody years and I’ve never seen anything like this. It’s racist, it’s discriminatory and it’s all about suppression,” he said.

A spokesperson for Mr Morton said the bill responded to the Joint Standing Committee on Electoral Matters’ recommendations from its reports into the 2013, 2016 and 2019 federal elections “where it considered these matters in detail”.

Meanwhile, the federal government has announced it will give the Australian Electoral Commission another $9.4 million to try to get more First Nations people enrolled to vote. The money would go towards advertising programs, a series of educational podcasts and updating electoral systems so they can recognise skin and community names.