Fall Guys: Ultimate Knockout is going bigger than ever before. During a special livestream event on May 16, developer Mediatonic announced that its hit battle royale video game will soon be free-to-play for everyone, with optional season passes available to purchase. Plus, Fall Guys finally has a release date for Nintendo Switch, Xbox, and Epic Games Store, meaning it will soon be available on all platforms. Here’s what to expect from Fall Guys‘ new era.

What is ‘Fall Guys’?

First, here’s some background for anyone new to the game. Fall Guys launched in August 2020 on PlayStation 4 and PC via Steam only. Up to 60 players can compete against each other online as bean-like characters in a colorful, bouncy-house-like arena. Fall Guys features several chaotic battle royale mini-games ranging from tag to soccer. Players are eliminated in each round until one remains to take the crown. Fall Guys has often been compared to Netflix’s Squid Game series, but the game takes inspiration from real-life game shows like Total Wipeout.

When players win the competition, they earn in-game currency known as Kudos and Crown Shards, which can be exchanged for cosmetics and emotes. Fall Guys has crossed over with many franchises, such as Godzilla, Doom, and Sonic the Hedgehog, bringing pop culture costumes to the game. Since its launch, Fall Guys has featured six seasons with different themed cosmetics and courses. 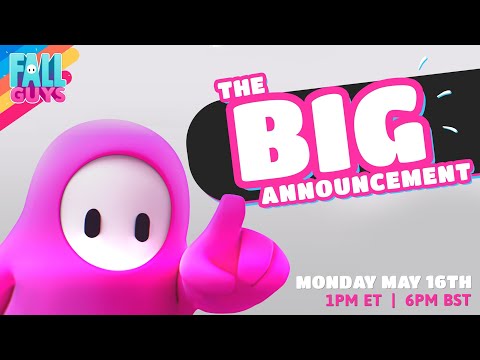 The Nintendo Switch version will allow handheld and docked play. Additionally, players can use Joy-Cons or the Nintendo Switch Pro Controller. On PlayStation 5, Fall Guys will feature 4K resolution and 60 FPS for faster load times and better, brighter graphics.

Fans who want to play with friends on other platforms won’t have to worry: Fall Guys will be entirely cross-play and cross-platform. Those who already have Fall Guys downloaded will continue to receive updates, but it will no longer be available for download on Steam.

New Fall Guys players can pre-register for an Epic Games Store account now. The more registrations the game receives, the more cosmetics players can earn ahead of release.

In addition to joining new platforms, Fall Guys will soon be free-to-play. On June 21, Mediatonic will launch a brand new season called Free For All to celebrate. This will include new levels and cosmetics — more details will arrive later. And while fans can progress through the game for free, Fall Guys will offer a Season Pass in exchange for a new currency called Show-Bucks. The pass gives access to additional levels, cosmetics, and items.

Those who already own Fall Guys will receive a Legacy Pack that includes “a nickname, nameplate, the Regal costume, the Veggie Dog costume, the Feisty Dwarf costume – and a Season Pass for Season 1,” according to Mediatonic’s announcement post.

Fall Guys is available now on PlayStation 4 and PC via Steam. Fans should make sure to download the game’s latest version to prepare for the free-to-play release next month.