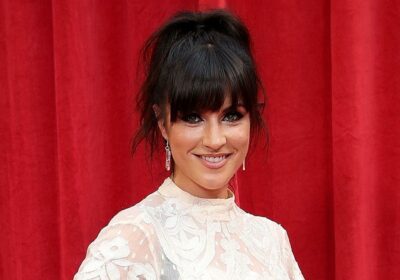 Despite her on-screen character not having the most luck in her love life, off-screen things are much smoother in Laura Norton’s personal life.

The actress, 39, who plays Kerry Wyatt on Emmerdale is currently loved up with Mark Jordon, 57, who joined the soap as Daz Spencer in 2014.

Mark joined the soap two years after Laura did for a short term role before coming back in 2017. Daz was written out of Emmerdale in January 2019.

Laura and Mark struck up a firm friendship on the show before their chemistry turned into romance in 2015, 18 months after Mark left the soap.

She previously told OK!: “It was about a year and a half later. We hadn’t seen each other since he’d left but we were friends. Then we just started hanging out and before we knew it we were falling for each other. We didn’t want to spoil our friendship. It was a slow burner.”

And Mark added: “When we met, this didn’t seem to be on the cards.”

Before meeting Laura, Mark was married to actress Siobhan Finneran from 1997 to 2014. They share two children together.

Mark added: “We were really good friends. We kept re-examining the question and eventually it was a bit more of a question.”

Laura and Mark got engaged in 2018, after Mark booked a holiday to Spain for Laura’s birthday, but didn’t announce the news until seven months later.

Mark took to Twitter to tell the couple’s fans about the engagement.

“Well 2018 had some of the highest highs and the lowest lows. Really got to feel the love of true friends. Feel blessed by the support of my children and elated to have heard the word “yes” from the most beautiful woman in the world.”

In early 2021 they welcomed son Jesse which Laura shared on Instagram alongside sweet snaps of the baby.

“So, on Friday Jan 29th at 1.30am we managed to bring this little champ into the world. It was the most incredible, surreal experience I have ever had and probably ever will and my tiny mind is blown.

“He is perfect and we’re all so happy to welcome him to the fam. Jesse Jordon we’re all head over heels IN LOVE with you.”

In August 2022, Laura and Mark announced that they're expecting their second child together with the pair taking to Instagram to share the happy news with their fans.

Laura shared a loved-up snap of her and Mark, with her blossoming bump clearly visible, and told her followers: "Round 2… @markjordondad".

Meanwhile, Mark also shared the news on his own account and happily told his followers: "Jesse Poppy and Joe get to share our next adventure.

"Thank you @laura_norts for the most special gift you’ve brought me . Thank you for being an amazing mum . Our next special little person is very lucky to have your care love and brilliant view of life.

"Let the adventures begin again . You’re working so hard in the Dales and give so much to us all. All five of us are blessed to have you in our world . Thank you xxxxx."