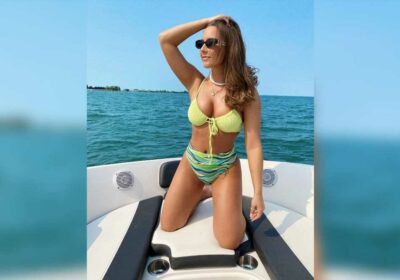 Hailie Mathers hit the high seas in a colorful bikini.

Eminem’s daughter shared photos of herself posing on a boat in a high-waisted, upside-down chartreuse bikini and black sunglasses and quipped, “aye aye, captain” in the caption.

In both photos, Hailie’s toned abs were on full display.

The fashion influencer has worn the bikini top before — having previously posted it on her feed while promoting her deal with Puma.

It’s unclear where the photos were snapped, but Hailie, 25, recently spent time in Chicago, where she attended Lollapalooza; however, she may have returned home to Michigan since then.

She didn’t tag the photographer, but fans can likely assume it was her longtime boyfriend, Evan McClintock. Hailie shared a rare photo of him in July and gushed about him in the caption.

“I rarely share my feed, but when i do i’m happy it’s with you,” she wrote.

Eminem’s half-brother, Nathan Kane Mathers, commented on the post, “My Homie Evan,” so it appears her family approves of her beau.

Hailie and McClintock, 25, are high school sweethearts who began dating in 2016 and continued their romance at Michigan State University.

She previously told the Daily Mail that the “Lose Yourself” rapper, 48, is supportive of her relationship with McClintock.

“Of course, we are very close,” she said of her father.

A source also told the outlet that her family has accepted McClintock.

“Hailie’s family have welcomed Evan, they are a fantastic young couple who love cozy nights in rather than hard partying,” the insider shared.