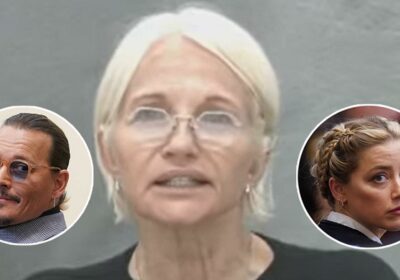 "I had a scratch on my back once that got him very, very angry because he insisted it came from me having sex with a person who wasn't him"

As Amber Heard’s team continues to present witnesses in the ongoing Johnny Depp defamation case against her, actress Ellen Barkin appeared via video deposition as part of the actress’ defense.

In a video filmed in 2019, the “Animal Kingdom” star opened up about her “sexual” relationship with Depp in the ’90s after the two worked together on “Fear and Loathing In Las Vegas.”

“We just developed a friendship over time that lasted, I guess, if we met in the ’90s, maybe 10 years, a little less,” she said, adding “the friendship went up and down living on different coasts.”

She stated the relationship “became romantic in nature” when she moved from New York to Los Angeles and Depp “switched the buttons” — meaning “the friendship went from a purely platonic friendship to a romantic one.” She then corrected herself, asking, “Can you change that to sexual?”

The sexual relationship lasted “several months,” where she would see him “three or four times a week.” When asked if she was aware Depp “drank to excess,” she said, “I was always aware. He was drunk all the, most, a lot of the time. He was a red wine drinker.”

Though Barkin said she wasn’t aware of him using any prescription drugs, she said he would use “hallucinogenics, cocaine, marijuana” and used it in her presence “all the time.” She added, “He was always drinking or smoking joints.”

When asked whether she ever witnessed him being “out of control,” she said he once “threw a wine bottle across the room, the hotel room, on one instance in Las Vegas when we were shooting Fear and Loathing In Las Vegas.” She said it happened during a fight between Depp and his friends or possibly an assistant. While the bottle didn’t hit anyone, she said Depp threw it in the direction of her and a group of people.

She went on to call Depp “just a jealous man” and “controlling” during their time together — saying he would often ask questions like, “Where are you going? Who are you going with? What did you do last night?”

“I had a scratch on my back once that got him very, very angry because he insisted it came from me having sex with a person who wasn’t him,” she also claimed, saying it would be “very common” for him to be controlling and jealous. She added that he could also be angry and demanding.

Barkin said Depp was the one who ended the relationship.

Depp is seeking $50 million in damages after Heard claimed she was a survivor of domestic abuse in an op-ed in the Washington Post in 2018. While she didn’t name Depp in the piece, his lawyers argue it was implied to be about him and negatively affected his career. She countersued Depp for $100 million.

The actor has already lost an earlier lawsuit he took in the UK over the same article that appeared in The Sun.