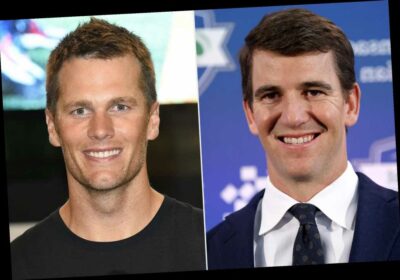 After winning his seventh Super Bowl championship, Tom Brady received a congratulatory message from the quarterback responsible for ensuring it wasn't his ninth.

"Yeah, I sent Tom a text just congratulating him and really just saying how not surprised but impressed with what he was able to do this year with Tampa, changing teams, shortened season, lock out and pandemic, everything going on," Manning told SI.

"To still learn a brand new offense and make those adjustments and go win a championship is pretty spectacular," he added. "I've known Tom a long time and I just wanted him to know that I was impressed, along with a lot of other people."

Of course, Brady — who joined the Buccaneers in March 2020 — and Manning previously shared the Super Bowl stage. In 2008, Manning led the Giants to an upset victory over Brady and his then-team, the New England Patriots, in Super Bowl XLII. The Patriots had entered the game as overwhelming favorites, having gone undefeated the entire regular season and playoffs.

With the Giants down 14-10 and just minutes left in the fourth quarter of the game, Manning threw to receiver David Tyree, who caught the ball with one hand and used his helmet to secure it.

The drive led to a game-winning touchdown, and Manning was named Super Bowl MVP. It's considered one of the greatest upsets in sports history.

"Congratulations on your retirement, and a great career Eli!" Brady wrote in the tweet. "Not going to lie though, I wish you hadn't won any Super Bowls."