Home » Lifestyle » Dog warning: From Wales to Yorkshire – the UK beaches banning dogs from next week

Dog warning: From Wales to Yorkshire – the UK beaches banning dogs from next week 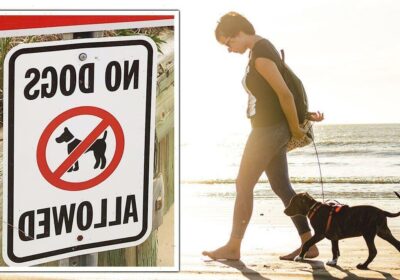 In recent years, a number of councils across the UK have opted to put in place banning orders against residents walking their dogs along local beaches. Owners who disobey the instruction can be left footing the bill for a £1,000 fine in some regions with authorities imposing the rules from the middle of spring up to the end of summer.

The following beaches will be imposing full bans against dog walking from Sunday, May 1 until Friday, September 30:

In Cornwall, the following beaches have a ban on dogs between 10am and 6pm from July 1 to August 31:

While some also have closures from May 15 to September 30. Those areas with Blue Flag and Seaside Awards are required to have longer restrictions and include:

If your beach isn’t on the list, it’s always best to check with your local council before travelling or else risk a hefty fine.

Look out for signs along beachfronts indicating bans on dogs or restrictions on areas dogs can be walked.

All councils ask that you pick up after your four-legged friend and remove any litter while on the beach.