Barking mad! Owners share snaps capturing the hilarious struggles of owning Irish wolfhounds – as they battle to fit into cars, take over the sofa and tower over the kitchen counter

In a hilarious gallery shared to Bored Panda,  the overgrown pooches were seen battling to fit onto sofas, in their dog baskets and even into cars.

The sheer scale of the wolf-like dogs, originally bred as hunting dogs in Ireland, is clear in pictures which see the canny canines posing next to baffled babies and bewildered sausage dogs.

Elsewhere the cowering creatures are seen towering over Shetland ponies, as owner are left squashed by their attempts to be lapdogs. 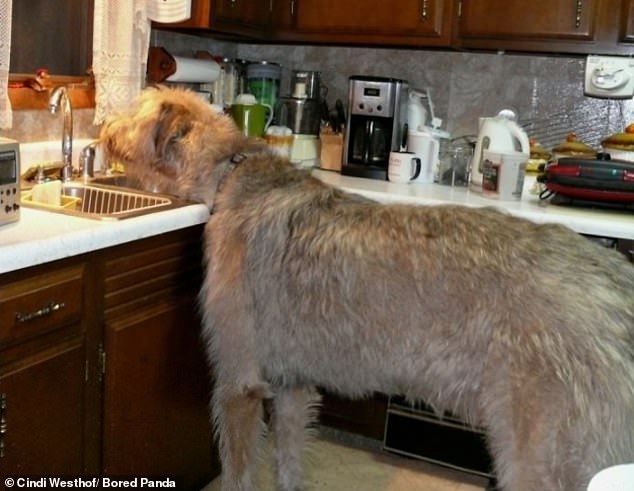 Proud dog owners have shared extraordinary pictures of the struggles of owning huge Irish wolfhounds, including Cindi Westhof, who posted a picture of her pet pooch taking over the whole kitchen as he drank from the tap 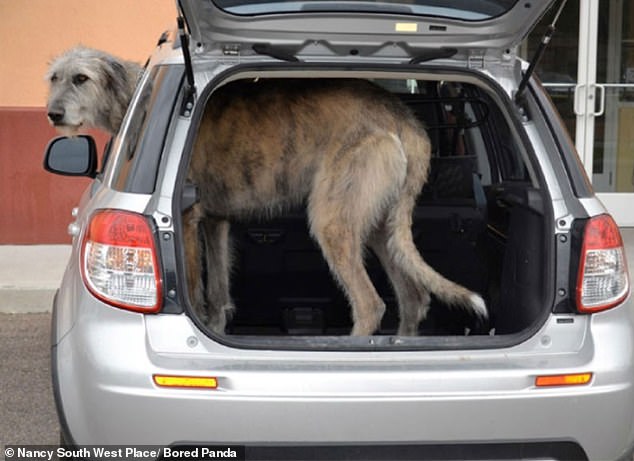 Meanwhile owner Nancy revealed she was being forced to consider a new car as her wolfhound could barely fit into her vehicle, in a gallery of hilarious pet pictures 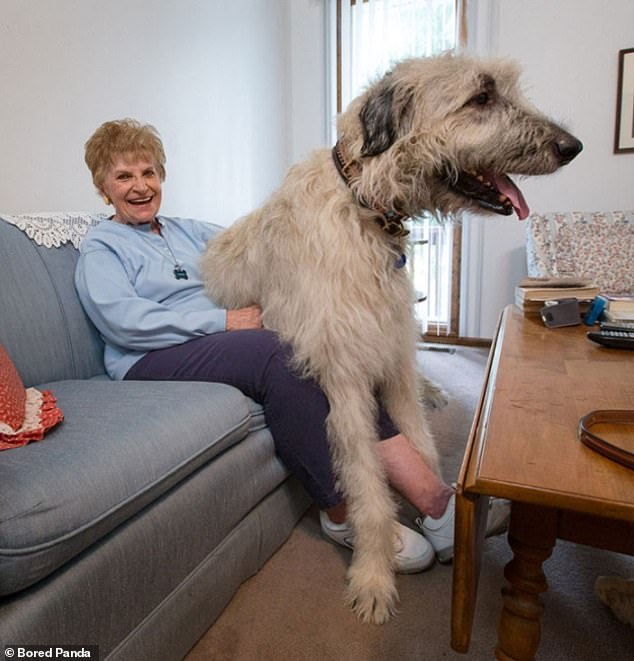 Joining the gallery, a lady was seen being squashed by the weight of her pooch as he didn’t seem to understand that he was simply too large to be a lapdog 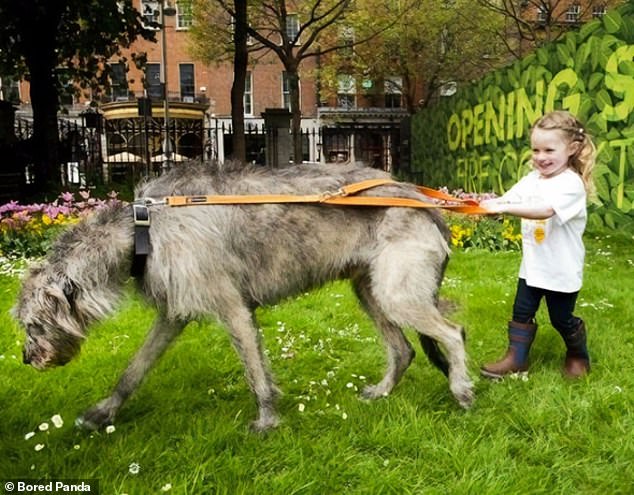 Elsewhere a little girl was pictured being taken for a walk by her Irish wolfhound, who towered above her in a gallery of funny pictures of the pooches 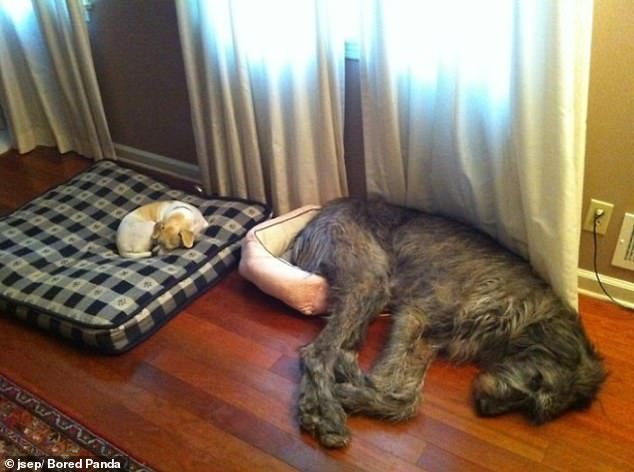 Meanwhile one dog was kicked out of his own bed by his smaller comrade, and forced to slum it in the much smaller basket, which only fitted his rear end 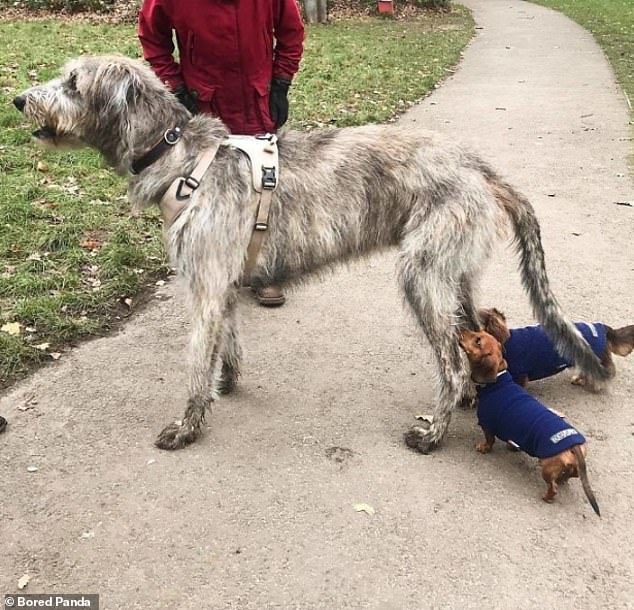 Pawsome! Two tiny sausage dogs were highly intrigued by their huge companion, who seemed oblivious to his fascinated fans, in a gallery of hilarious pictures of the huge breed 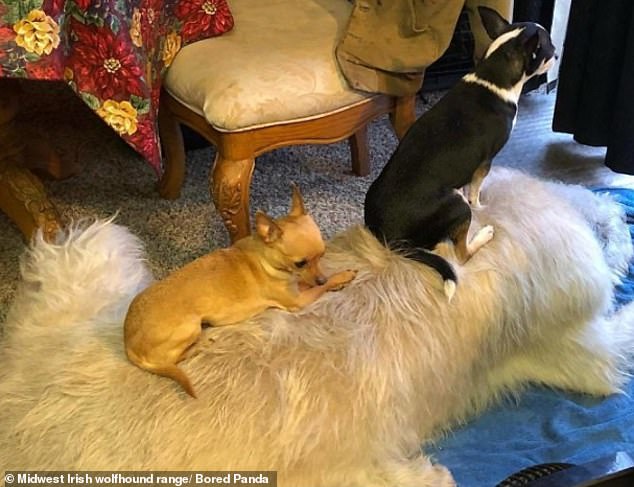 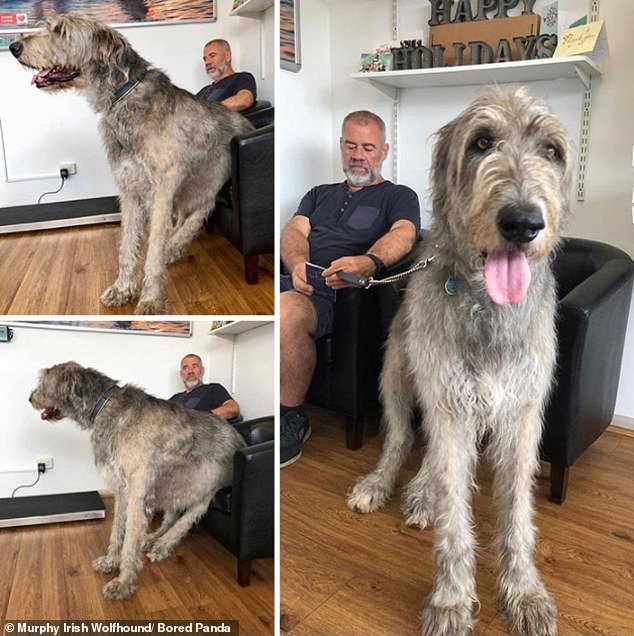 This wolfhound insisted on trying to sit on a chair in the waiting room at the vet, demanding the same comfort his owner was getting 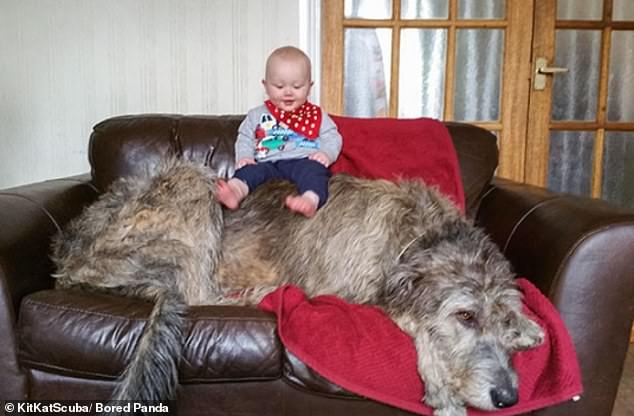 A bouncing baby was thrilled to be sitting on his furry friend’s back, though the wolfhound in question appeared less excited by the situation 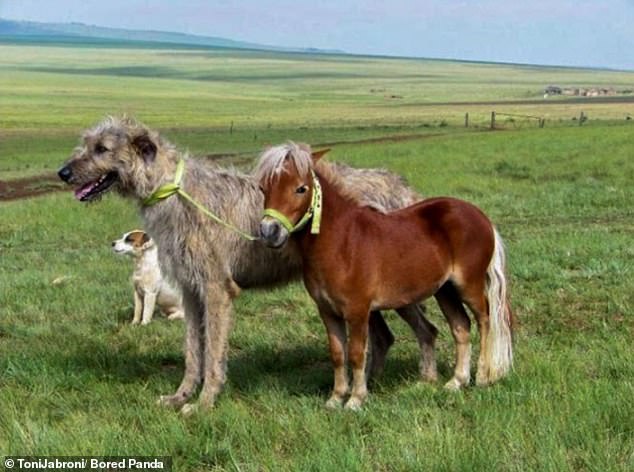 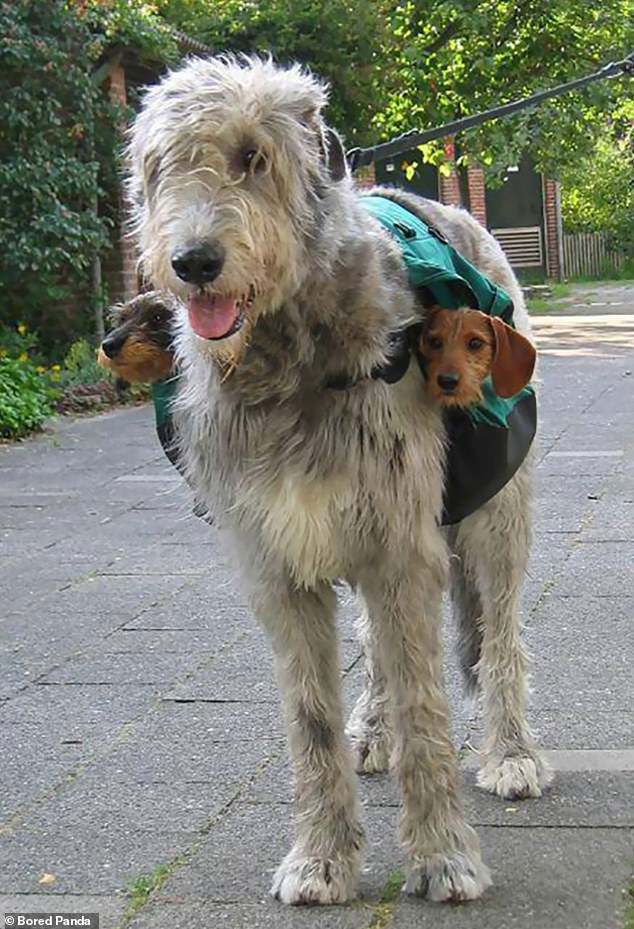 Adding to the hilarious gallery of wolfhounds, one was seen holding a carrier containing two small sausage dogs, who looked thrilled to be seeing the world from a whole new viewpoint 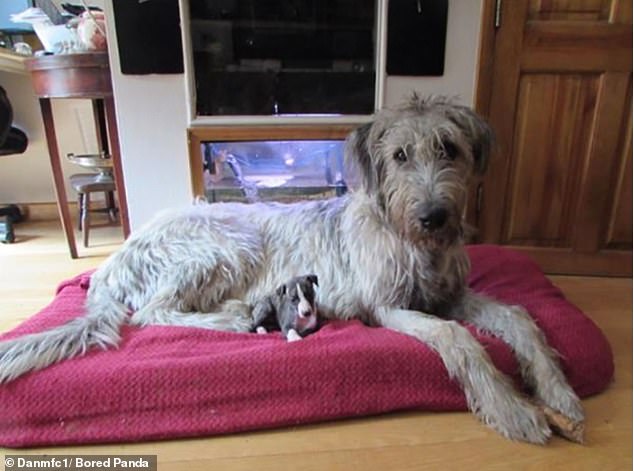 Elsewhere American user Dan shared a sweet picture of the size difference of his two dogs, writing: ‘Our new Whippet puppy sitting with his friend, an Irish Wolfhound puppy!’ 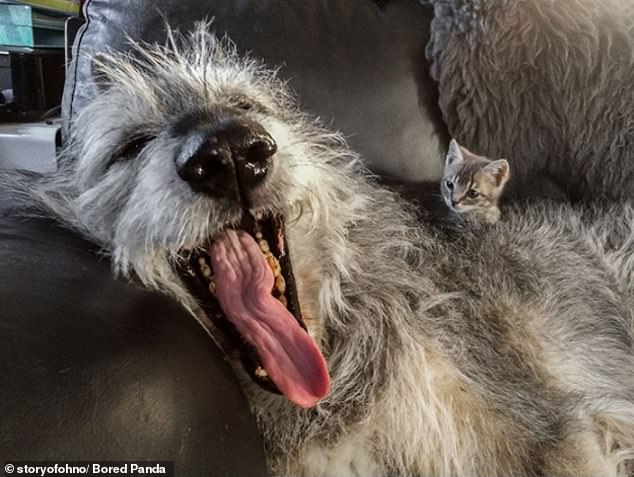 Meanwhile an American librarian shared a picture of her kitten admiring her wolfhound, captioning it with: ‘What a big mouth you have’, in the hilarious gallery 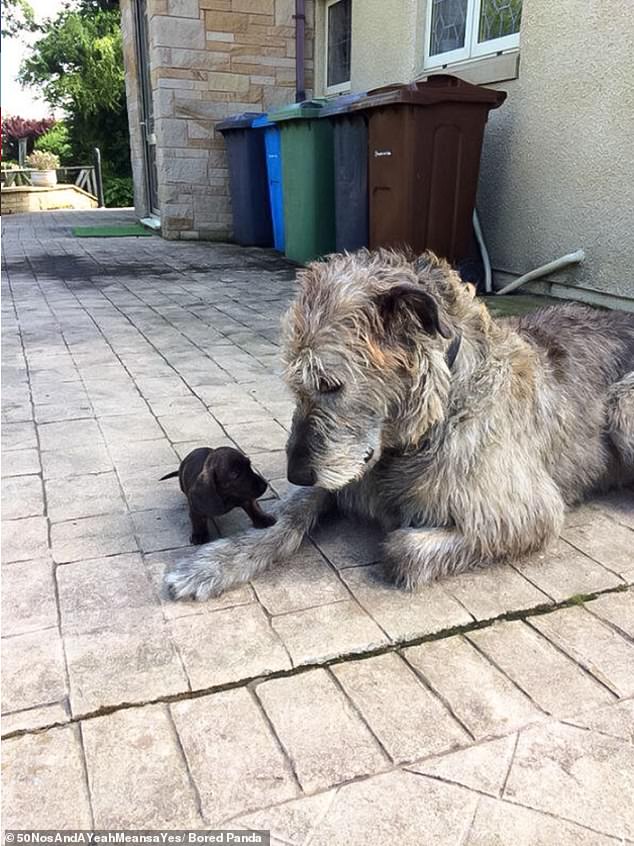 Joining the gallery, one Reddit user shared a picture of his cautious canine looking decidedly perturbed at the sight of a curious puppy staring up at him 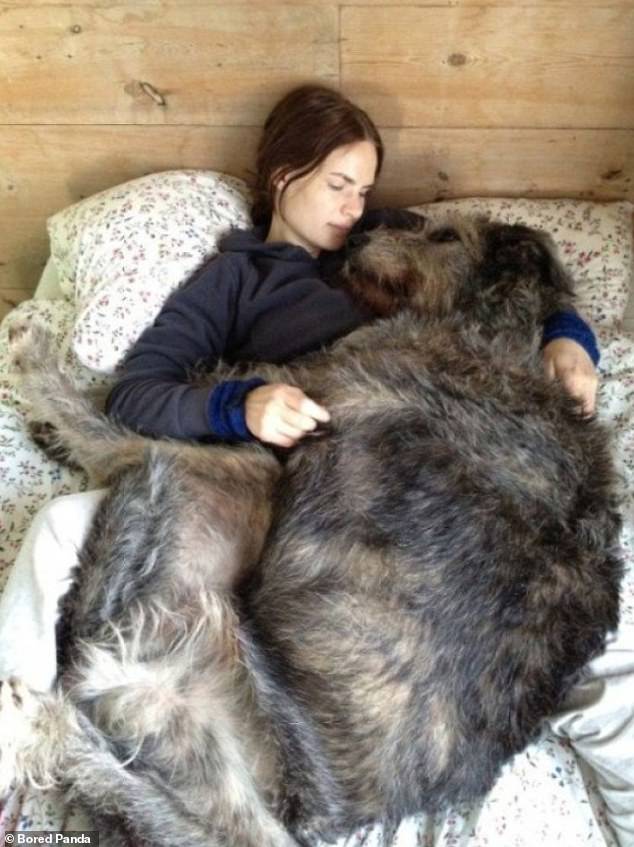 Meanwhile one user shared a snap of his girlfriend being swamped by her adoring wolfhound, seemingly unaware of his overwhelming size 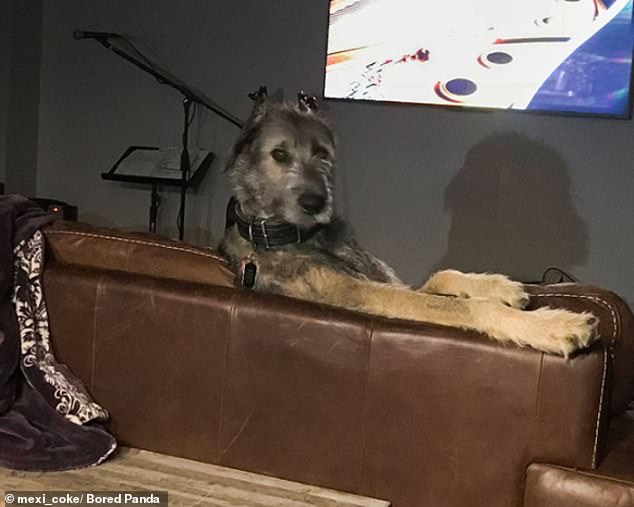 And one man was thoroughly amused by his pet pooch’s very human-like stance, as he leaned back and spread his paw over the couch, in the hilarious gallery 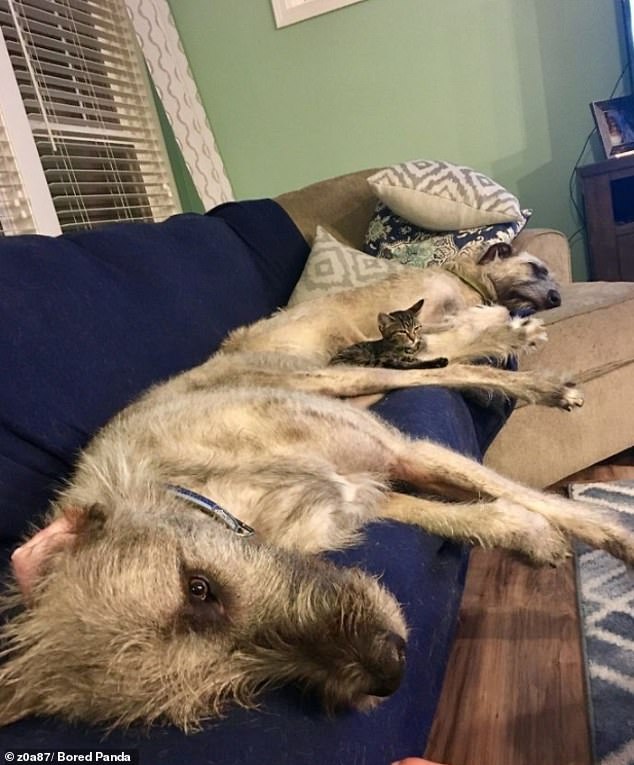 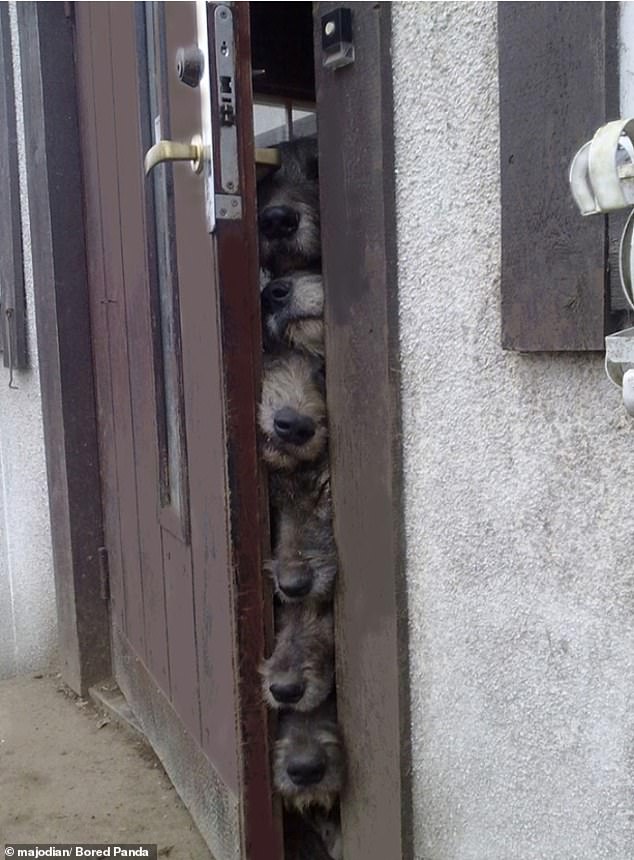 A Finish dog breeder shared a hilarious picture of seven very inquisitive Irish wolfhounds poking their noses through the crack of a door, branding them their ‘security system’