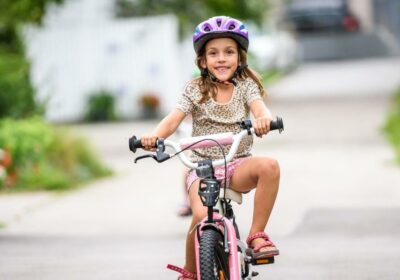 Decathlon has slashed the price of kids bikes in the run up to Christmas, so if you're on the lookout for a sturdy bike for the children, look no further.

The sporting goods retailer is giving shoppers up to 30% off selected bikes which comes as good timing with just 11-days before Christmas, best of all the offer lasts until December 31st.

Whether you're after a bike for small or slightly older kids – you will certainly find something that will suit all their needs and which they will love.

We have rounded up some of Decathlon's best kids' bike deals that you can get your hands on right away below.

Just like the pink unicorn version, this 14" kids' 'monsters' bike is also designed to ease little ones aged 3 to 4 1/2 into the world of cycling. This 20" hybrid bike is designed for daily use, and allows kids aged six to nine cycle on roads as well as paths.

It comes equipped with six speeds, giving young ones more control on slopes and varying terrains The brake lever has also been designed for ease of use.

The bike is suitable for kids with heights between 120 and 135 cm.

This pink and black hybrid bike that includes a basket allows kids aged six to nine cycle on roads and paths in all kinds of weather.

The 20" bike comes equipped with mudguards, a stand, and a basket. It has also been designed for year-round cycling in any weather, both on the street and on unpaved trails.

This 24" Rockrider bike is designed as an introduction to mountain biking for children aged nine to 12, and come with a single-speed for comfort and ease of use.

You may need to consider some accessories to go with the new bike, so if you're in need of a bicycle helmet you can shop the full range here.

Bicycle lights are crucial at this time of the year, especially if kids are riding their bikes to and from school. It will at the very least give parents peace of mind to know that they can been seen when it's dark.

If you're after more sporting goods, then you're in the right place as Decathlon has plenty for you to get your hands on before and after Christmas.

We spotted this Mid 9 scooter in grey for £74.99 which is suitable for kids aged 9 to 14 years and comes with front suspension and big wheels, while the handlebar brake helps you better control your speed. It also comes in various colours.

Need to let off some steam after the Christmas frenzy? Why not invest in a punch bag and get fit while you're at it? Choose from the basic Free-standing inflatable punching bag for £59.99 or a more advanced Heavy punching bag 900 which retails at £149.99.

Shoppers can also get their hands on many other items including electronics,gym equipment, winter gloves and hats, Skiing, cycling, hiking and swimming equipment and much more.